Continental Room C (Hilton Chicago)
Y. Shimizu, H. Takeda, T. Ueda, K. Kamada, and T. Hyodo (Nagasaki University)
We have reported recently the potential of planar-type NASICON-based solid electrolyte gas sensors equipped with Pt mixed with Bi2O3as a sensing electrode and pristine Pt as a reference electrode [1].  This type of sensors could be operated at room temperature with sufficiently high CO response and selectivity.  The present study was directed to investigating the effects of the addition of various kinds of metal oxides to both the Pt sensing and reference electrodes on the CO sensing properties.

Pt paste (Tanaka Corp., TR-7907) mixed with an appropriate amount (n wt%) of a metal oxide (MO), which is denoted as Pt(nMO), and just Pt paste or another kind of Pt(nM’O) were applied on the same surface of the NASICON disc as a sensing and a counter electrode, respectively, and then were fired at 700ºC for 30 min in air. The sensor thus fabricated was denoted as Pt(nMO)/Pt or Pt(nMO)/Pt(nM’O).  The metal oxides tested were Bi2O3, La2O3, In2O3, V2O5, WO3 and CeO2.  The magnitude of gas response was defined as the difference in EMF (ΔEMF) measured between in a sample gas and in base air.

CO response properties of the sensors equipped with the pristine Pt reference electrode were found to depend on the kind of metal oxides added to the Pt sensing electrode.  CO response with a EMF change to a positive direction was observed with a Pt(15Bi2O3)/Pt sensor, whereas a Pt(15CeO2)/Pt sensor showed a EMF change to a negative direction, as shown in Fig. 1.  The operating temperature dependence of the CO response of sensors was also affected by the kind of the metal oxides added (see Fig. 2).  By referring such CO response properties of these Pt(15MO)/Pt sensors, a Pt(15Bi2O3)/Pt(15CeO2) sensor was fabricated and then its CO response properties were further investigated in detail.  The CO sensing performance of the Pt(15Bi2O3)/Pt(15CeO2) sensor in both dry and wet air atmosphere, including interferences from 300 ppm CO2, CH4, C3H6 and H2, will be reported in the presentation. 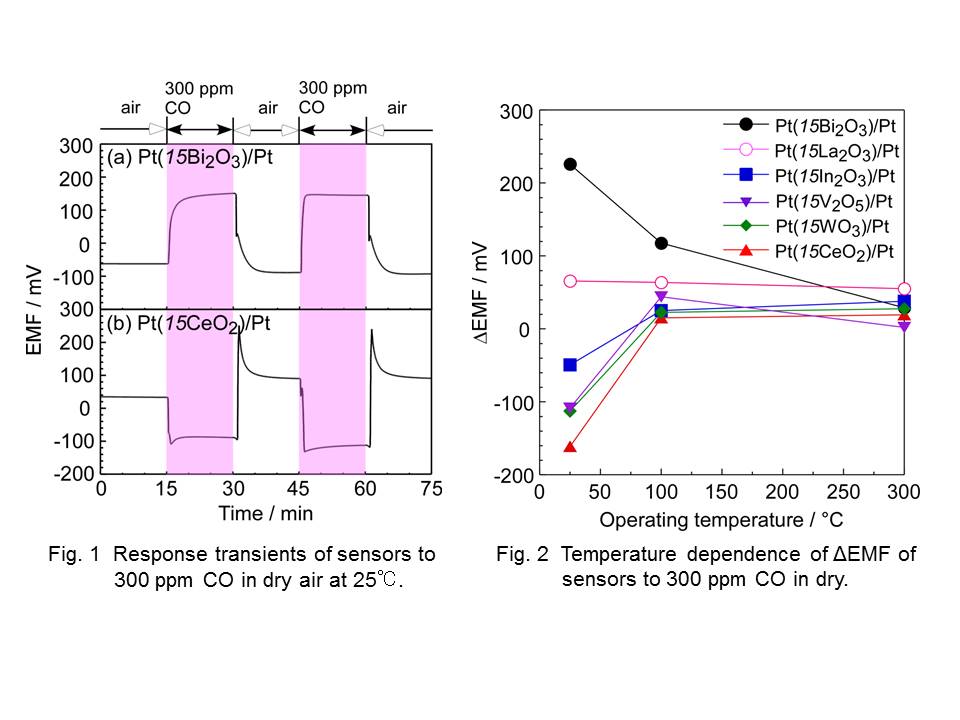