Direct Methanol Fuel Cells (DMFCs) have attracted enormous attention as potential power sources for electronic devices and back-up power solution due to higher energy density than gaseous fuels such as hydrogen. However, problems like slow electro-kinetics of alcohol oxidation, costs of membranes and catalysts and alcohol crossover are hindering their commercialization.[3] Recent studies have shown that the electrocatalytic activity for alcohol oxidation in alkaline media is much higher than that in acidic media. The oxidation of methanol (MeOH) in alkaline media has shown higher current densities and smaller overpotentials compared to those in acidic media.[4] Besides this the catalyst materials used for alcohol oxidation reaction (AOR) and oxygen reduction in Anion-Exchange Membrane Direct Methanol Fuel Cells (AEM-DMFCs) are cheaper and more efficient than Pt.[5]

Pd has proved to be a good electrocatalyst for AOR in alkaline medium, showing higher activity and better steady-state currents than Pt.[6] To improve the activity and stability towards alcohol oxidation, Pd-based catalysts including Pd-oxide composite, Pd-based binary and Pd-based ternary catalysts have been investigated by several research groups.

Table 1: Summary of synthesized electrocatalysts. Loading on carbon and composition of the catalysts were measured by thermogravimetric analysis coupled with inductively coupled plasma optical emission spectroscopy.

Electrochemical evaluation of the methanol electrooxidation in alkaline media was done via cyclic voltammetry (CV) and chronoamperometry (CA) in a standard 3-electrode set-up with mercury/mercury oxide reference electrode (MMO). In Figure 1A&B, it is observed that the tested materials present a lower onset potential and higher current densities for the AOR compared to Pt/C, Pd/C and PdNi/C. This is an evidence that the electrocatalysts presented here have an improved catalytic activity than the one reported before.

Membrane electrode assemblies (MEAs) with the electrocatalysts were fabricated using a Tokuyama A201 as membrane and SGL 10AA and Freudenberg H2315 as anodic and cathodic diffusion layer, respectively. Figure 1C shows the Tafel plots derived from single cell performance tests. A significant increase of power densities for ternary catalysts compared to Pd/C or PdNi/C catalysts at fuel cell working potentials was observed. For a cell potential of 0.5V the performance magnifies from 4.8mW cm-2 for Pd/C to 23.2mW cm-2 for Pd3Ni0.5Ru0.5/C. These results are in accordance with the ones illustrated in Figure 1A&B.

Further work will include tests on an AEM-DMFC short stack based on Pd3Ni0.5Ru0.5/C anode catalyst. 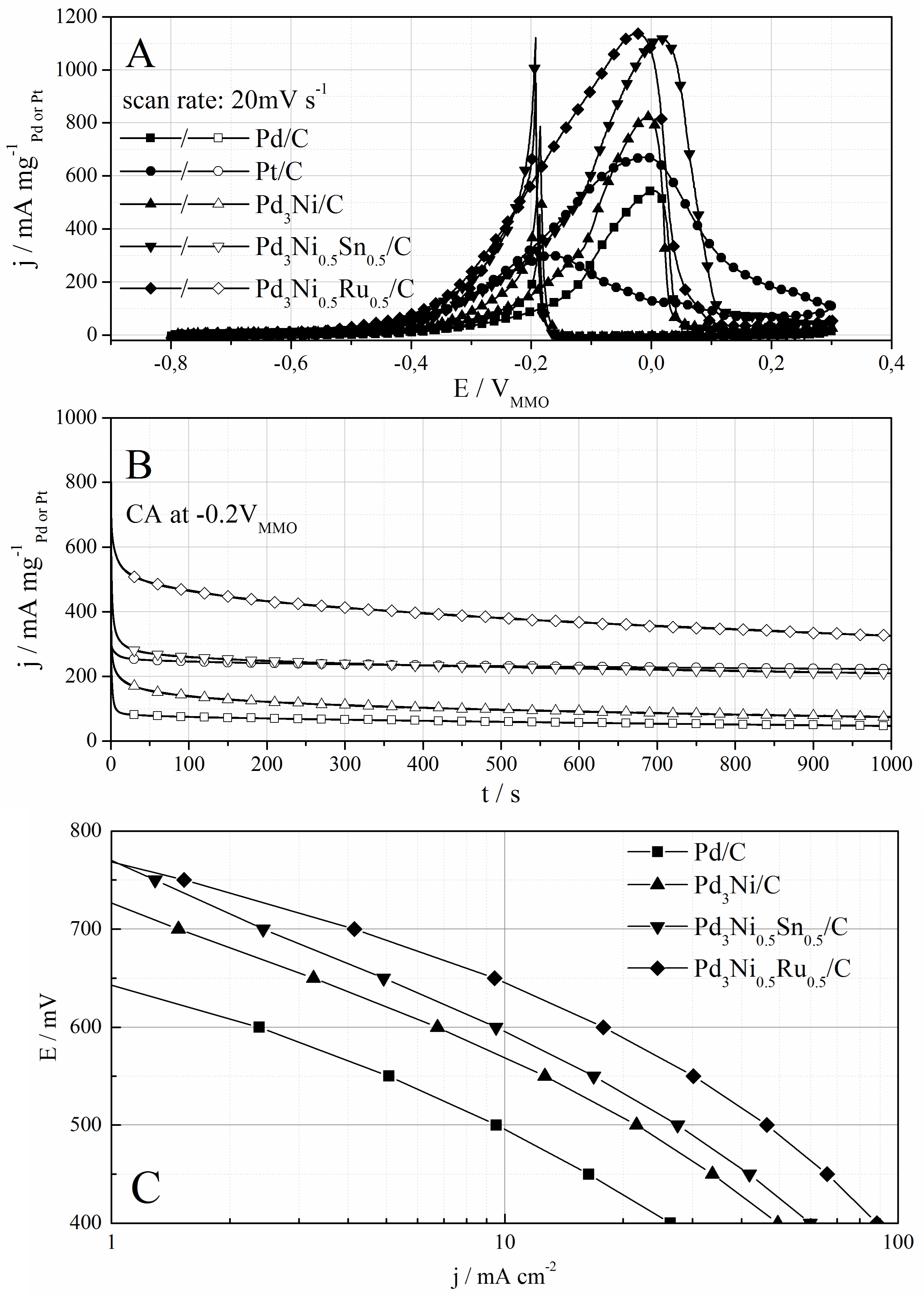