Conference Room 4K (Hilton Chicago)
R. Christensen, H. A. Hansen, and T. Vegge (Technical University of Denmark)
Density functional theory (DFT) calculations have greatly contributed to the atomic level understanding of electrochemical reactions. However, in some cases, the accuracy can be prohibitively low for a detailed understanding of, e.g.  reaction mechanisms. Two cases are examined here, i.e. the electrocatalytic reduction of CO2 and metal-air batteries. In theoretical studies of electrocatalytic CO2 reduction, calculated DFT-level enthalpies of reaction for CO2reduction to various products are significantly different from experimental values[1-3]. In theoretical studies of metal-air battery reactions, systematic errors compared to experiments have also been found in calculation of enthalpies of formation for bulk metal oxide, peroxide and superoxide species[4,5].

It is here demonstrated how the errors, which depend explicitly on the choice of applied exchange-correlation functional, can be identified through first principle methods. Ensembles generated using a Bayesian error estimation functional, in this case the BEEF-vdW functional[6], are used for the error identification. The ensembles, which consist of perturbations of the main van der Waals density functional, can be generated at low computational cost. It has previously been demonstrated how these ensembles can be used to estimate the magnitude of functional dependent errors[6]. When here applied for identification of the source of functional dependent systematic errors, ensembles for different reactions are not only examined individually, but compared to determine patterns in functional dependence.  The method is exemplified by ensemble comparison of reaction enthalpy to methanol and formic acid depicted in Figure 1. The functional dependence on the calculated reaction enthalpy to methanol is twice as large as that to formic acid. This suggests that the systematic error is due to carbon-oxygen double bonds, as the change in number of carbon-oxygen double bonds in the reaction to methanol is two as compared to one for reaction to formic acid. This is subsequently confirmed by further comparisons of functional dependence and a significant source of systematic errors in DFT-level computational electrocatalytic CO2reduction is hence identified.

The new insight adds increased accuracy e.g., for reaction to formic acid, where the experimental enthalpy of reaction is 0.15 eV.  Previously, this enthalpy has been calculated without and with correctional approaches to 0.39 eV and 0.30 eV, respectively[2]. Here, correcting the newly identified error in an otherwise similar approach as used previously the enthalpy of reaction is 0.13 eV. For metal-air batteries the previously observed large systematic errors are found not to be intrinsic to the metal oxide species. Errors can be significantly reduced by using metal chlorides as energy reference rather than pure metals. The mean absolute error per oxygen versus experiments for alkali metal peroxide and superoxide species will be 0.03 eV and 0.09 eV, respectively, using metal chlorides as reference, as compared to 0.47 eV and 0.17 eV using metals as reference. The presented approach for error identification is expected to be applicable to a very broad range of systems.

Figure 1: Calculated enthalpies of reaction from CO2 to CH3OH (x axis) and HCOOH (y axis). Functional variations between the two are seen to correlate with slope 0.5 consistent with a systematic error on carbon-oxygen double bonds. 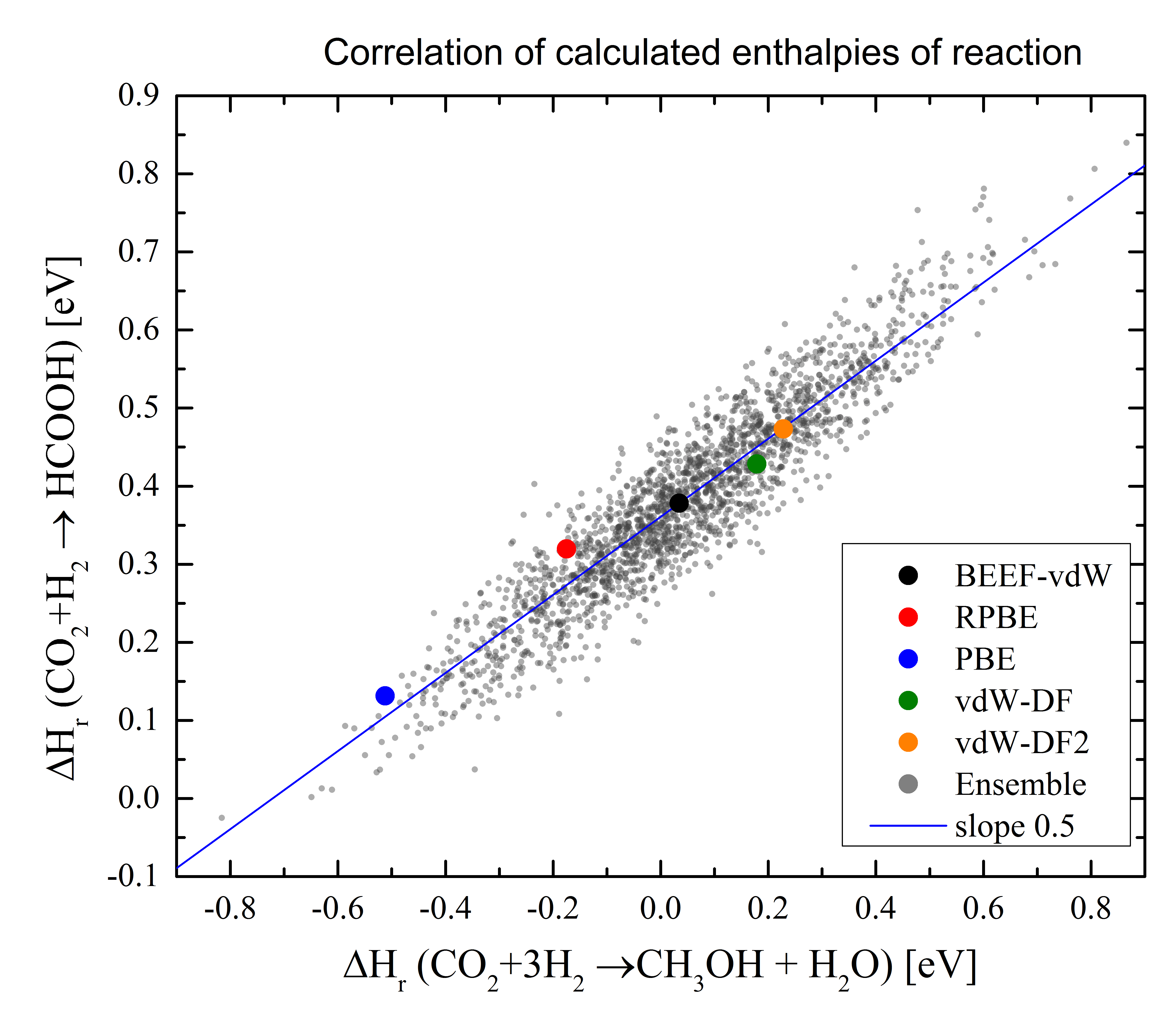