Conference Room 4D (Hilton Chicago)
J. W. Ager III (Lawrence Berkeley National Laboratory), M. Shaner, K. Walczak (Joint Center for Artificial Photosynthesis), I. D. Sharp (Lawrence Berkeley National Laboratory), and S. Ardo (University of California, Irvine)
There is significant recent interest in understanding the science and developing technologies associated with solar-driven photoelectrochemical water splitting with the goal of producing hydrogen as a potential carbon-neutral transportation fuel [1].   One specific implementation of this concept is an integrated or monolithic device that operates spontaneously, without added electrical bias [2].  Experimental demonstrations of such systems date back to the mid-1970s [3], and, since that time, there have been improvements in both the functional understanding and performance of the devices.

This presentation will review laboratory demonstrations of spontaneous, solar water splitting.  There are a number of design considerations which arise when considering the full solar to fuel conversion system.  These include the type and number of semiconductor junctions used to generate the requisite photovoltage, the use of co-catalysts, the electrolyte conditions, a product separation method such as a membrane, and the geometric layout and size of components.  To date, all approaches which have a solar to hydrogen (STH) conversion efficiency of >5% employ either 2 or 3 semiconductor junctions arranged in a voltage-additive tandem configuration.  The degree of integration varies widely, as well as the definition of this term.  Some demonstrations employ isolated photovoltaic elements connected by wires to hydrogen and oxygen evolution catalysts that are in contact the electrolyte.  Others employ a more integrated strategy, with the photocathode and/or the photoanode in near or direct contact with the electrolyte.  A small subset of devices employ a mechanism, such as a proton or anion conducting membrane, to separate products and yield a pure H2 stream.

Reported STH conversion efficiencies range from <1% to 18%.  In most cases, these are calculated by measuring current densities and assuming 100% Faradaic efficiency, though H2 production rates are measured directly in some reports.  It will be emphasized that STH values are not validated by an independent test facility as is the case with solar photovoltaic efficiency “world records” [4].  Device longevities under operation will also be discussed.  Again, while there is not an accepted protocol for reporting device lifetime, it will be shown that few reports demonstrate operation for >24 hours.  Standard and accepted international guidelines and protocols for evaluating and reporting device metrics for complete and integrated solar water splitting systems would be of great value in quantifying technological progress in the field. 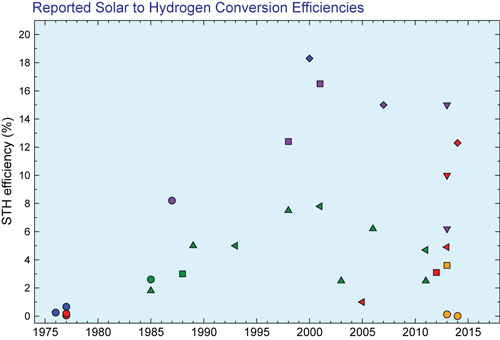