Salon A-3 (Hilton Chicago)
K. Yoshima, Y. Harada, and N. Takami (Toshiba Corporation)
Lithium batteries are capable of a high energy density, high power, and long cycle performance. Demand for lithium-ion batteries has increased for applications ranging from portable devices to large machines such as electric vehicles and energy storage for load leveling. Especially, a high voltage of the battery system is required for these large-scaled applications. However, we can use only around 3.7 V from a conventional monopolar-type lithium-ion battery, and are required to connect in series for the high-voltage systems. To overcome these problems, a bipolar-type cell [1] is considered to be one of the suggestions for improvement the cell voltage. Using solid-state electrolyte makes it possible to fabrication the bipolar batteries without a porous film separator and partitions to avoid liquid junction. The solid-electrolyte, for example, Li2S-P2S5 glass-ceramics[2], LiSICON[3], perovskites[4] and garnets have been investigated to improve an ionic conductivity at RT.  The cubic garnet-type with a nominal composition of Li7La3Zr2O12 (LLZ) [5] has high ionic conductivities (2.4×10-4 Scm-1 at RT) and a wide electrochemical window. On the other hand, difficulty of forming an effective electrode-electrolyte interface is known as problems of all-solid-state lithium-ion batteries. Forming a favorable electrode-electrolyte interface by interfacial modification has effectively decreased the interfacial resistance.

In this study, we tried to use a lithium-ion conductive binder as buffer layer on active materials and LLZ for improving Li+ ion diffusion in electrode-electrolyte interface. Olivine LiMn1-yFeyPO4 (LMFP) has been studied as a potential 4V-class cathode with high thermal stability compared to such as LiCoO2, LiNi1/3Co1/3Mn1/3O2, and LiMn2O4. Spinel Li4Ti5O12 (LTO) has advantages of a zero strain property, the suppression of internal short-circuit reaction[6], high power, and long-life performance[7] for the anode in the bipolar battery with the solid-state electrolyte. Li-ion cell with a combination of the LMFP cathode and the LTO anode shows a voltage plateau of 2.5V for Mn3+/Mn2+ redox[8]. 5 series LMFP/LTO cell has a good harmonization with 12V battery system. Current collectors for the LMFP cathode and the LTO anode can be used as the same aluminum foil, which becomes easy to make bipolar electrodes.

We thus fabricated 12V-class bipolar LiMn0.8Fe0.2PO4/ LTO battery with the LLZ solid-electrolyte layer, which based on a composite electrode composed of active materials and LLZ coated with a lithium-ion conductive binder, and this single-layered electrode cell takes out 2.5 V. The bipolar batteries were constructed from five cells stacked together, which contained four bipolar electrodes and two monopolar electrodes as endplates to obtain output voltage of 12 V. Cathodes and anodes in bipolar batteries are disposed in contact respectively with opposite sides of a common current collecting element forming a unitary bipolar structure. The LLZ powders were synthesized by solid phase process and synthesized particles were crushed into smaller sizes by bead milling. After mixing LLZ powders and lithium-ion conductive binder, the mixture sprayed and deposited on each electrode. The layer of LLZ powders between the anode and the cathode is working as not only the electrolyte but also as an ionic conductive separator

After LLZ powders deposited, cross-sectional SEM image of LLZ/LTO is shown in Fig. 1. Particle diameter of LLZ powders is < 1mm by bead milling process. Electrode- electrolyte interface has effectively pasted up using binder and peeling was not observed. Thickness of LLZ layer, LMP layer, and LTO layer were 20, 60 and 60 mm, respectively. Total thickness of the bipolar battery was 570 mm.

Fig. 2 shows fcharge and discharge curves of the bipolar LMFP/Li4Ti5O12 battery at the first cycle and 25°C. The bipolar battery shows the discharge curve has a high voltage slope at 12V corresponding to 2.4V for a single cell and has a capacity of 5mAh. The result of other electrochemical tests of bipolar LMFP/Li4Ti5O12 batteries will be also reported. 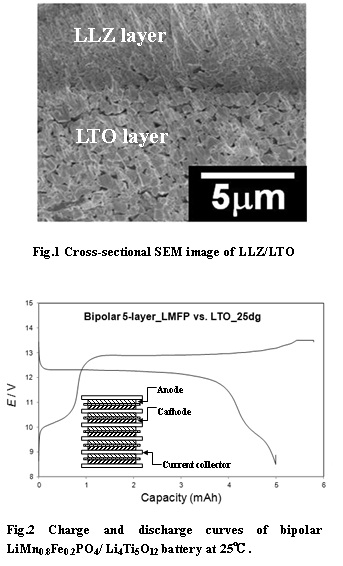