Methanol is widely investigated as anodic reactant in direct methanol fuel cell (DMFC) for its character of clean, convenient, and high theoretical density when compared with traditional fossil fuel and hydrogen. However, the sluggish kinetics of the methanol oxidation reaction (MOR) promotes the investigation of electrocatalysts to improve the reaction efficiency of the MOR process. Platinum is developed as the best catalysts for the MOR process, but poor anti-poisoning ability and the high cost severely limit its applications. Recent studies show that the amorphous metallic nanoparticles hold much promise for use as catalyst because of the surface-rich low-coordinate site, which could act as active site for catalyst [1].it was found that the incorporation of P into metallic alloy could form amorphous structure and lower the size of the nanoparticles, both of which are in favor of high electro-catalytic efficiency. Besides, the abundant valence electrons of phosphorous shows influence on magnetic and electro-catalytic properties of the metallic nanoparticles [2].

In this abstract, four supported Pt-based electro-catalysts prepared through impregnation method at different pH values were introduced for MOR. The difference of pH values for composition and crystallization of each electro-catalysts and their electro-catalytic activity was investigated through analyzing X-ray diffraction spectra (XRD), high-resolution transmittance electron micrograph (HRTEM), and cyclic voltammetry curves (CV). The XRD patterns show four obvious widening of diffraction peaks with the increase of pH value which indicates the decrement of particle size and the results are in accordance with our previous investigation. The CV tests show that the electro-catalyst prepared in high pH value perform a relatively high MOR activity comparing with others prepared in lower pH. The promotion of electro-catalytic activity for MOR is mainly due to the diminish of the particle size of electro-catalyst in high pH value which produce low-coordinate site on the surface of nanoparticle. The low-coordination sites show stronger adsorption towards small molecules which facilitate electro-oxidation of methanol on Pt-Co-P electro-catalyst. 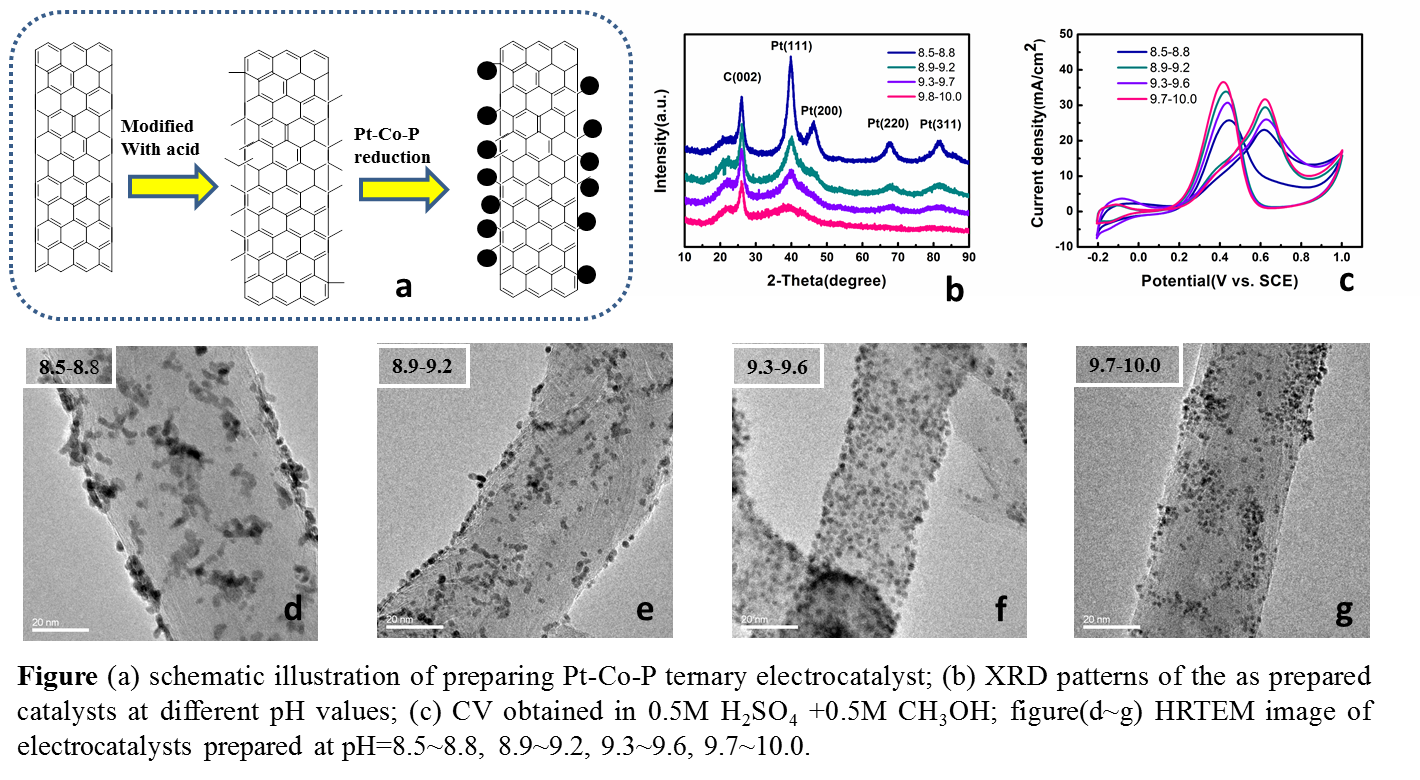