Lake Michigan (Hilton Chicago)
P. Ceroni, M. Locritani, A. Fermi, G. Bergamini (University of Bologna), Y. Yu, and B. A. Korgel (University of Texas at Austin)
Silicon (Si) is a widely used semiconductor, in part because it is abundant, widely available and essentially non-toxic. From the photophysical point of view, it exhibits weak light absorption and emission because it has an indirect bandgap. Conversely, Si nanocrystals (SiNCs) in the quantum size range (2-12 nm) can be made as viable light emitters with emission wavelength that can be tuned from the near-infrared (NIR) into the visible by decreasing their size [1-3].  Covalent Si-to-carbon bonding also offers the possibility of integrating inorganic and organic components into robust structures. Most optical studies of SiNCs have focused on alkyl-passivated nanocrystals, while little is known about the interaction between such nanocrystals and chromophoric units attached to the core. Therefore we have studied the interaction of an inorganic silicon nanoparticle core with appended organic chromophores for the development of novel luminescent materials.

The synthesis of luminescent colloidal nanocrystals of silicon is still a difficult task in terms of reliability and reproducibility. We report the thermal decomposition of hydrogen silsequioxane, followed by etching and hydrosilylation [4]. This method isolated SiNCs with good yields, high surface coverage and exceptional control over the dimensions and optical properties of the materials.

In the present work, the H-terminated  nanocrystals were used as a platform for co-passivation with dodecene and different organic chromophores [5] by thermal hydrosilylation. For example, we functionalised two families of SiNC of average diameter of 2.5 and 5 nm with porphyrin chromophores: porphyrin excitation results in an efficient energy transfer to the nanocrystal core. To the best of our knowledge this is the first time in which highly efficient light harvesting from photoactive units to the silicon core have been demonstrated. This approach enabled us to circumvent the drawback of the low molar absorption coefficient of SiNCs. The investigated hybrid material exhibits high quantum yield also in the NIR spectral region with lifetime in the µs range. 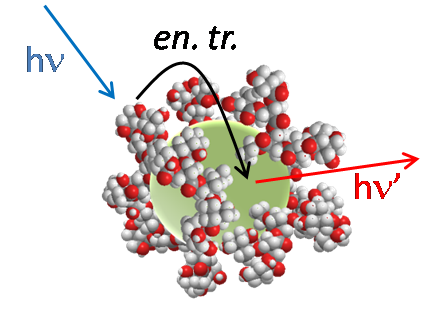