Salon C (Hilton Chicago)
M. R. Skorski, D. M. Fox, and A. E. Miller (American University)
Introduction
The use of 3D-printing in the United States has skyrocketed in recent years. This has opened up the possibilities for cheap, reproducible, and modifiable chemical sensors that can be made in the lab. However, new polymers have to be developed that support these functions. To that end, this study will investigate the conductive properties of titanium dioxide (TiO2) nanoparticles suspended in Poly(Acrylonitrile-co-Butadiene-co-Styrene) (ABS). It is desired that the doped polymer be able to create 3D printed objects that can effectively conduct electricity. The applications for this technology would include 3D-printed chemical sensors, circuits, and other devices.
To study the mechanical strength and electrochemical effects of the TiO2, doped polymers are created for printing in 1,5, and 10 % by mass nanoparticle to ABS concentrations. The printed objects made from TiO2 doped ABS filaments will be compared to those objects made from store bought ABS filament.
Experimental
To create the doped polymer, ABS is mixed with the TiO2 nanoparticles in 10 mL of acetone per gram of doped polymer. After evaporation of the acetone the polymer is mixed in a DSM Xplore Micro 15cc Twin Screw Compounder before being molded into 3D printer filament with a Filabot Wee extruder. The 3D objects are printed with a FlashForge Creator. A MARK-10 advanced digital force gauge and an ESM301 motorized test stands are used to perform three point flexural tests and stress-strain tests. The electrochemical properties will be analyzed by using a Van der Pauw resistivity test.
Results and Discussion
Early work has shown that the ABS is able to suspend and disperse the TiO2 nanoparticles. While the Van der Pauw tests have not begun, preliminary mechanical testing has been completed. The mean and standard deviation for the stress and strain measurements of the 1% printed objects were 28.1 ± 9.5 MPa and 12.8 ± 4.4 %. The 5 % and 10 % graphs qualitatively showed similar large deviations for both values. The large standard deviation for both values is believed to be caused by the variation in the filament thickness. The filaments are expected to be 1.75 mm but were thinner along parts of the strand by up to 24%. When the tests were repeated with the filament diameters accounted for, the mean and standard deviation for the stress and strain measurements of the 1% printed objects were 39.4 ± 0.8 MPa and 8.93 ± 0.3 % (Figure 1). All future 3D prints will take the changing filament diameter into consideration. 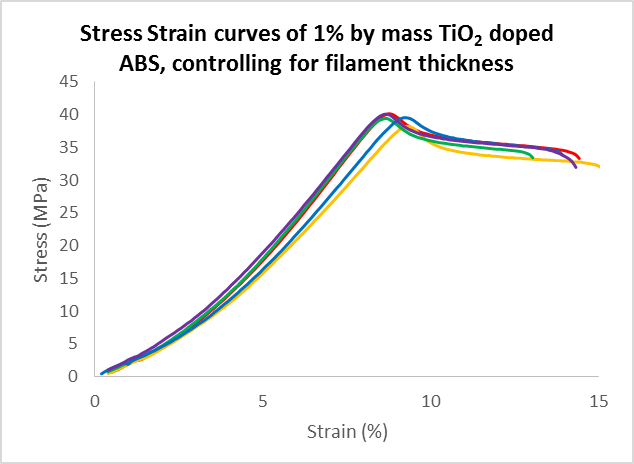