PDPP-TNT/PC71BM (1:2 by weight) blend films were prepared on glass substrates by spin-coating process from solutions in chloroform alone or a mixture of chloroform and o-dichlorobenzene (o-DCB) (4:1 by volume). The absorption spectrum of a blend film from chloroform alone is shown in Fig. (a). For TA measurements, 150-fs light pulse at 650 nm was used as a pump pulse. To detect the ground-state bleaching in PDPP-TNT, we used light pulse at 740 nm as a probe pulse. For the picosecond fluorescence measurements, 150-fs light pulse at 660 nm was used as an excitation light. A streak camera equipped with a monochromator was employed to monitor the fluorescence spectra [Fig. (a)] and kinetics of the PDPP-TNT polymer.

Figure (b) shows the transient absorption kinetics of a neat PDPP-TNT film and the PDPP-TNT/PC71BM blend films (chloroform alone and chloroform & o-DCB) at a low excitation photon density (~ 100 nJ/cm2). The time profile for a neat PDPP-TNT film can be reproduced by single exponential decay (time constant: 175 ps), which is in good agreement with that of fluorescence. This result indicates that the observed signal originates from singlet excitons, and the absence of a long-lived component implies that charge carriers such as polaron pairs and triplet excitons are not efficiently photogenerated in the neat film. On the other hand, time profile for blend films can be reproduced by sum of exponential decay (time constant: 125 ps) and constant component. Therefore, in the blend films, the fast decay component can be interpreted as recombination of singlet excitons, and the long-lived one is attributable to the initially separated charge carriers. The signal due to charge carriers is more dominant in the blend film from a mix of chloroform and o-DCB than that from chloroform alone. This is consistent with the result from the photovoltaic measurement that more photocurrent is generated in the film from a mix of chloroform and o-DCB than in that from chloroform alone. Discussion on the diffusion length of singlet exciton in neat PDPP-TNT film will be also presented from the results of singlet–singlet annihilation analysis.

Figure: (a) Molecular structure of PDPP-TNT and absorption spectrum of PDPP-TNT/PC71BM blend film from chloroform alone. Fluorescence spectra of the PDPP-TNT polymer. (b) Transient absorption kinetics of the neat and blend films. 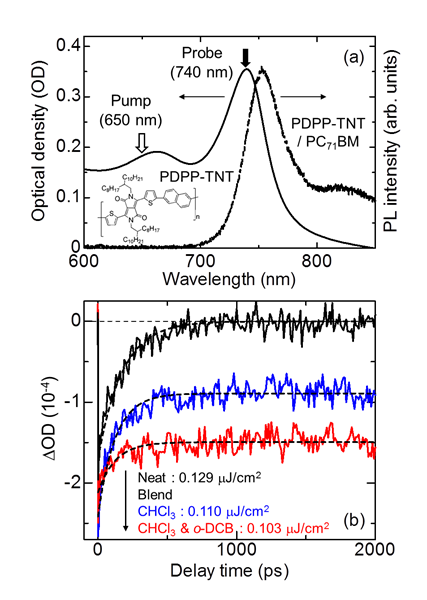