Salon A-3 (Hilton Chicago)
J. Wandt (Technische Universität München), H. A. Gasteiger (Technical University of Munich), C. Marino (Technische Universität München), P. Jakes (Forschungszentrum Jülich), R. A. Eichel (Forschungszentrum Jülich, RWTH Aachen University), and J. Granwehr (Forschungszentrum Jülich)
The formation of micro structured lithium (e.g. mossy/dendritic lithium) during battery charge is known to adversely affect battery life time due to the consumption of active lithium and electrolyte and also poses a safety risk due to internal cell shortening. For lithium metal anodes, the problem of dendrite formation caused by inhomogeneous lithium plating has been known for decades but in spite of intensive research no viable solutions have been found yet, thus rendering lithium metal anodes impractical for commercial cells.[1] Graphite, which has been widely used instead, can reversibly intercalate/deintercalate lithium ions for hundreds of cycles. Still, charging at harsh conditions, such as low temperature or high C-rate, can also trigger the formation of lithium dendrites on graphite anodes.[2] Most studies on lithium plating and dendrite formation are based on microscopic techniques. At the current stage, there are only very few analytical techniques available that give quantitative or semi-quantitative information about the occurrence of micro-structured lithium during cell cycling under in-operando conditions, one example being in-operando NMR spectroscopy which has been introduced by Clare Grey and coworkers.[3]

In this work we propose to use in-operandoelectron paramagnetic resonance (EPR) spectroscopy as a new analytical technique for the time resolved and quantitative determination of lithium microstructures both on lithium metal and graphite anodes. We present a novel cell design which can be cycled directly in the cavity of the EPR spectrometer and which has been successfully benchmarked against a standard cell design.

Firstly, we investigate the morphological changes of a lithium metal anode during cycling of a Li/LiFePO4 (LFP) cell as case study to demonstrate the capabilities of electrochemical in-operando EPR spectroscopy.[4] Figure 1 shows the voltage profiles and the evolution of the EPR resonance of the lithium anodes using a standard electrolyte with or without fluoroethylene carbonate (FEC) additive, which is known to reduce lithium dendrite formation.[5]In comparison to the standard electrolyte, the FEC additive significantly increases the reversibility of the lithium stripping/plating process. These results are also confirmed by ex-situ SEM images of cycled electrodes.

Secondly, we investigate lithium plating on graphite electrodes during the cycling of graphite/LiFePO4 (LFP) cells. Since plated lithium (due to low temperatures or high C-rates) can chemically intercalate into the underlying graphite at open circuit conditions, a dedicated in-operando technique like EPR has to be used for a thorough study of lithium plating on graphite.[6] 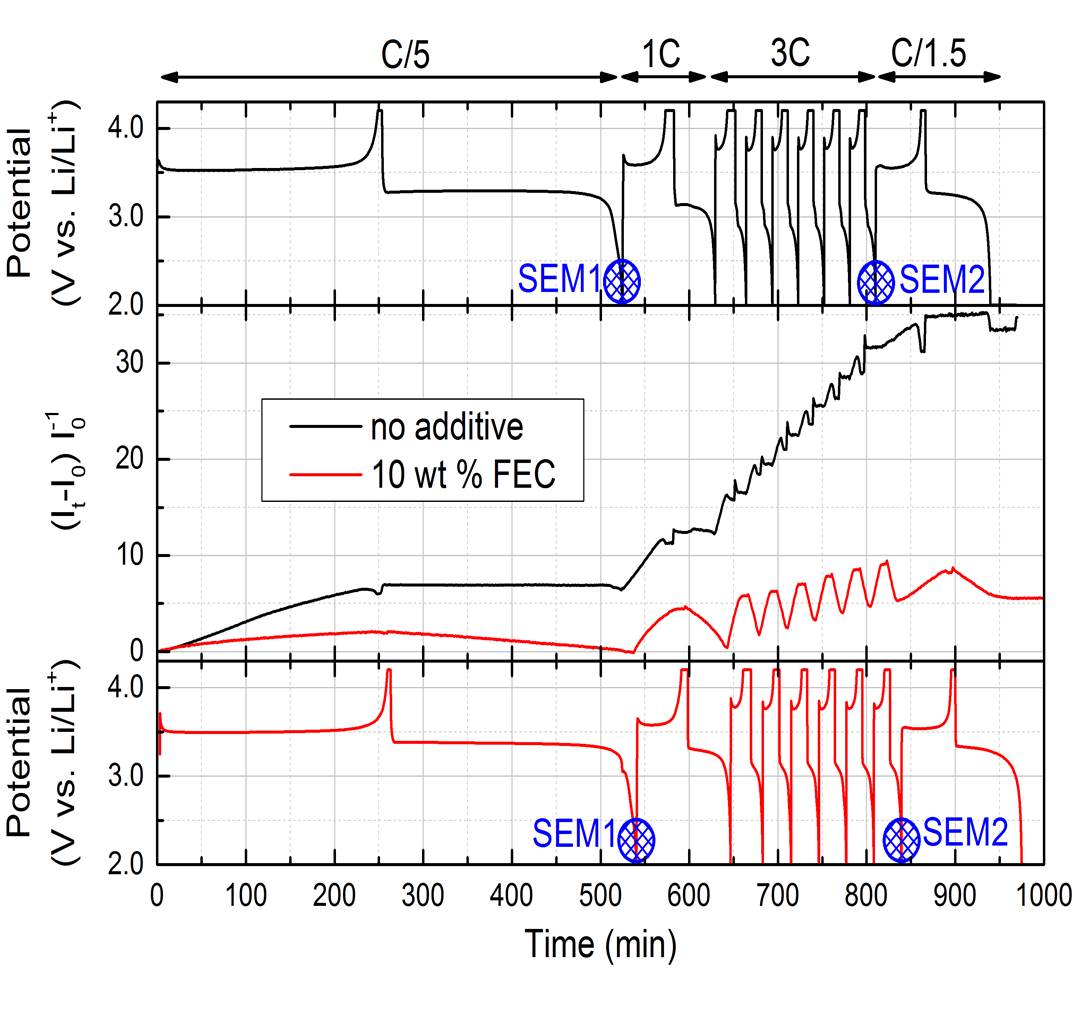