Conference Room 4G (Hilton Chicago)
Y. Tominaga (Tokyo University of Agriculture and Technology)
Polymer electrolytes such as poly(ethylene oxide) (PEO)-metal salt complexes have attracted much attention as ion-conductive soft materials for novel battery systems, because of their safety compared with liquid electrolytes, their flexibility and their lightweight.  However, the conductivity of typical PEO-based electrolytes is limited to approximately 10-5 S/cm at room temperature, and it is extremely difficult to enhance the lithium (cation) transference number.  We believe that the development of novel polymers without PEO chains is one solution for improving the conductivity.  So we consider polycarbonates that can be obtained by the alternating copolymerization of carbon dioxide with epoxides and comprise novel polymer candidates for electrolytes.  Following the first report of the CO2/epoxide copolymer by Tsuruta et al., there has been considerable development of highly active catalysts for effective polymerization.  This copolymer is a remarkable macromolecule because it utilizes CO2as a raw material and has excellent properties; it is biodegradable, easily processed and colored, and has high transparency and low oxygen permeability.  We have focused on the chemical structure of the copolymer, which has one alternating carbonate group (-O-(C=O)-O-) in each repeating unit of the main chain.  The carbonate group has a large dipole moment, and it can dissolve many types of salts.  Carbonate-based organic solvents, such as dimethyl carbonate, are used as the electrolyte solution in Li-ion batteries because of their high dielectric constant.  Therefore, we think that the carbonate group can provide a suitable structure for the polymer framework.

In this study, we report on the use of poly(ethylene carbonate) (PEC) as a matrix for novel ion-conductive polymer electrolytes [1].  We found that the addition of small amount of TiO2 nano-particulates to the PEC-based electrolytes can enhance lithium transference numbers, t+, which are measured using an electrochemical combination method of DC polarization and AC impedance measurements for Li│electrolyte│Li cells.  Moreover, we undertook lithium-7 and fluoride-19 NMR spectroscopic and pulsed field gradient (pfg) diffusion measurements on these electrolytes.  The values of self-diffusion coefficients of the lithium cation (DLi) and the estimated t+ values for PEC-LiFSI-TiO2 were more than 10-7 cm2/s and 0.8 at 60 oC.  The Li-ion conductivities (σ at 60 oC × t+ estimated from the electrochemical method) of samples PEO20LiFSI, PEC0.53LiFSI and PEC0.53LiFSI-TiO2 (1 wt%) were calculated to be 5.6×10-5, 2.2×10-4 and 4.3×10-4S/cm, which are superior as a structure to polyether as an electrolyte for flexible batteries.

On the other hand, there are no detailed information on the ion-conductive behavior of PEC-based electrolytes. So, we used broadband dielectric spectroscopy (BDS) measurement for the investigation of correlation between ionic conduction and dielectric relaxation behavior over the broad range of salt concentration.  We measured BDS data and analyzed dielectric spectra using the Havriliak-Negami functions.  Fig. 1 shows salt concentration dependence of relaxation peak for PEC-LiTFSI electrolytes at 40 oC.  A strong peak indicates α relaxation derived from segmental motion of PEC main chains.  As the salt concentration increased, the α relaxation peak shifted to the high frequency region with increasing the peak area, which is opposite to the behavior of typical PEO-based electrolytes (the peak shifts to the lower frequencies) [2].  This means that the PEC-LiTFSI electrolytes show good conductivities at high salt concentrations because of the fast segmental motion with local ion-rich structures.

Acknowledgment:  This work was financially supported by a Grant-in-Aid for Scientific Research (B) of JSPS KAKENHI (25288095), Japan. 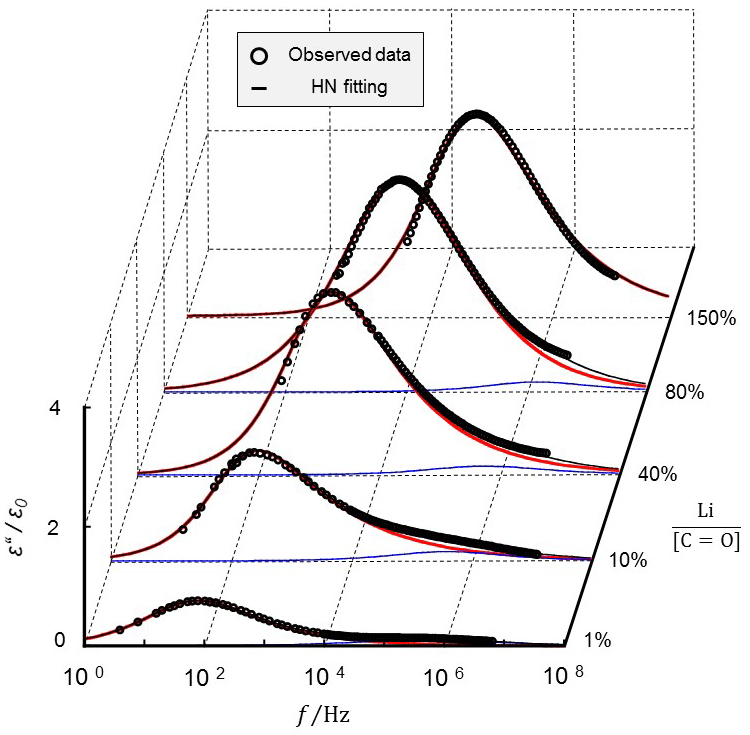