Lake Erie (Hilton Chicago)
A. Imanishi (Osaka University)
Ionic liquids (ILs) have attracted keen attention due to its applicability to various kinds of electrochemical devices such as Li-ion battery, wet-type solar battery, etc. For most of such applications, the interface between ionic liquid and electrodes plays an important role in their performance. However, we still lack enough knowledge on the interface structure and spatial distribution of chemical species during the electrochemical processes. It is known that most of ILs show extremely low vapor pressure, which enables us to apply various techniques that need vacuum conditions such as photoelectron spectroscopy. We recently developed the electrochemical photoelectron spectroscopy (EC-PES) to carry out in-situ XPS and UPS measurements under electrochemical condition using 3-electrodes type cell (Fig. 1). In this study, we investigated the molecular behavior of ILs and its solute near the electrode under cathodic applied potential.

BMI-TFSA (1-butyl-3-methylimidazolium bis(trifluoromethanesulfonyl) amide) and Ag-TFSA were mixed in a test tube, followed by stirring under ultrasonic irradiation to obtain 6.99 wt% Ag-TFSA/BMI-TFSA solution. The electrochemical cell was filled with thus prepared solution, and was left for over 6 h in a vacuum chamber to remove water. After that, the cell was transferred to an adjacent ultra high vacuum chamber of XPS. The electrode potential was controlled in a normal three-electrode system by a commercial potentiostat and potential programmer, with a Pt plate as the counter electrode (CE) and Pt wire as the reference electrode (RE). An Au plate, as the working electrode (WE), was placed on the IL surface (Au plane was set parallel to the liquid/air(or vacuum) interface). Spatial distribution of concentration and chemical states of each ions were investigated by spatial resolved XPS measurement. Al-Kα line (1486.6 eV) was used as an X-ray source.

Fig. 2 shows the mole fraction of Ag+ ions plotted against the distance from the edge of the working electrode. Under the applied potential of 0 V vs. Pt, the concentration of Ag+ ion was uniform (not shown). Under the applied potential of -1.2 V vs. Pt, a drastic change was observed: the concentration of Ag+ ion decreased at the edge of electrode, and gradually increased at larger distance from the electrode. This indicates that the diffusion layer was formed by the reductive reaction of Ag+ (Ag+ + e- => Ag) at the electrode. The thickness of the observed diffusion layer was 240 µm, which was much larger than the value usually supposed.  It was also found that the ratio of cation and anion was also affected by the applied potential. By the numerical simulation, it was revealed that this was due to a concentration-dependent diffusion coefficient, which is characteristic of the ionic liquid. We also revealed that the metal ions diffused by the hopping-like mechanism, in which the apparent diffusion coefficient increased with increasing of the concentration of ‘holes’ (vacancy formed between IL molecules) acting as hopping sites. The results on other kinds of metal ions and ILs will also be discussed. 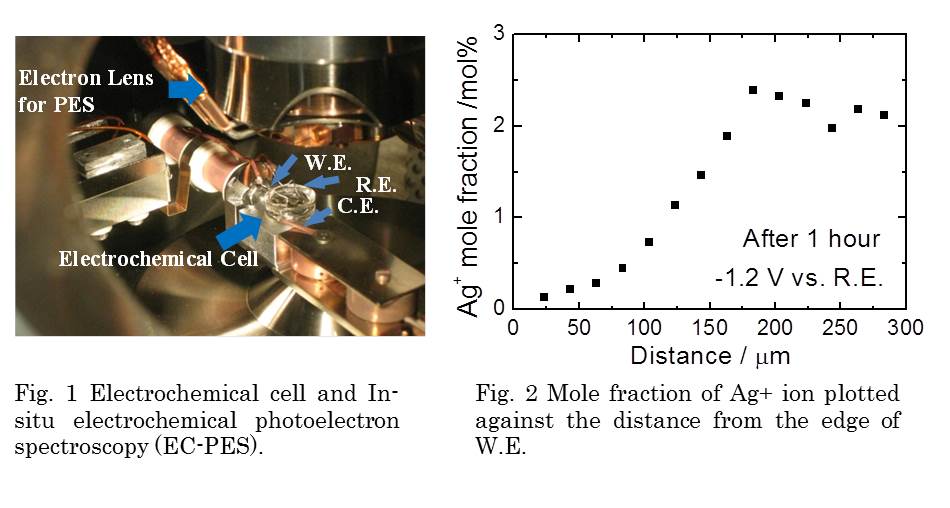