Salon A-5 (Hilton Chicago)
K. Takechi (Toyota Research Institute of North America), Y. Kato (Toyota Cetnral R&D Labs., Inc.), and Y. Hase (Toyota Central R&D Labs., Inc.)
Liquid based batteries, including a flow battery, have unique and significant benefits due to its simple structure and flexible handling of their liquid active materials as ‘electrochemical fuels’. In spite of this great ‘fueling’ capability, which may enable the rapid charging of electric vehicles, the energy density of the regular catholytes and anolytes is lower (<100 Wh/l) than that of the solid-state active materials used in regular batteries. A non-aqueous system is a simple and effective method of improving the discharging voltage more than 2 V, which is the limit of the aqueous system, coupling with highly negative anodes. The concentration of redox species in organic solvents is, however, generally lower than that in aqueous solutions and difficult to reach over 2 M with, at least, the same molar of supporting salt. It is important to note that stoichiometric couples of redox species and an appropriate salt is the minimum requirement for the liquid active materials because the valence of the redox species must be changed during discharging and charging and compensating ions must be present in the system. Moreover, the liquids should have a stable fluidic property without freezing or precipitation even in a low temperature range.

In this study, we report an innovative strategy to prepare the liquid active materials in order to increase their energy density. Our technology focuses on the melting of pure redox compounds to maximize their concentration instead of dissolving them in solvents. This simple yet challenging approach has been successfully realized using supercooled liquid technology by the combination of a specific plasticizing salt and a low melting point redox active compound. Such a supercooled liquid can be obtained by mixing of 4-methoxy-2,2,6,6-tetramethylpiperidine-1-oxyl (4-methoxy-TEMPO, MT) and Li bis(trifluoromethanesulfonyl) imide (LiTFSI, LT) and stabilizing the mixture further below their melting points. The redox-active supercooled liquid exists in a highly stable liquid state over a wide temperature range that extends to below its normal melting points. The special properties of this supercooled liquid are due to the scientifically unique and rare solvation state known as a ‘solvate ionic liquid’, which is typified by a liquefied ion-pair stabilized by a neutral third compound. As a catholyte, the addition of an appropriate amount of solvent such as water helps to enhance the electrochemical advantage while maintaining the liquid’s supercooled nature, and a battery with a Li+ conducting architecture exhibits 93% electrochemical activity and 99% coulombic efficiency in the 1st cycle with an average discharge voltage of 3.6 V (Fig. 1). The catholyte also performed an energy density of 200 Wh/l, which is one of the highest values for catholytes reported to date with an organic redox compound. 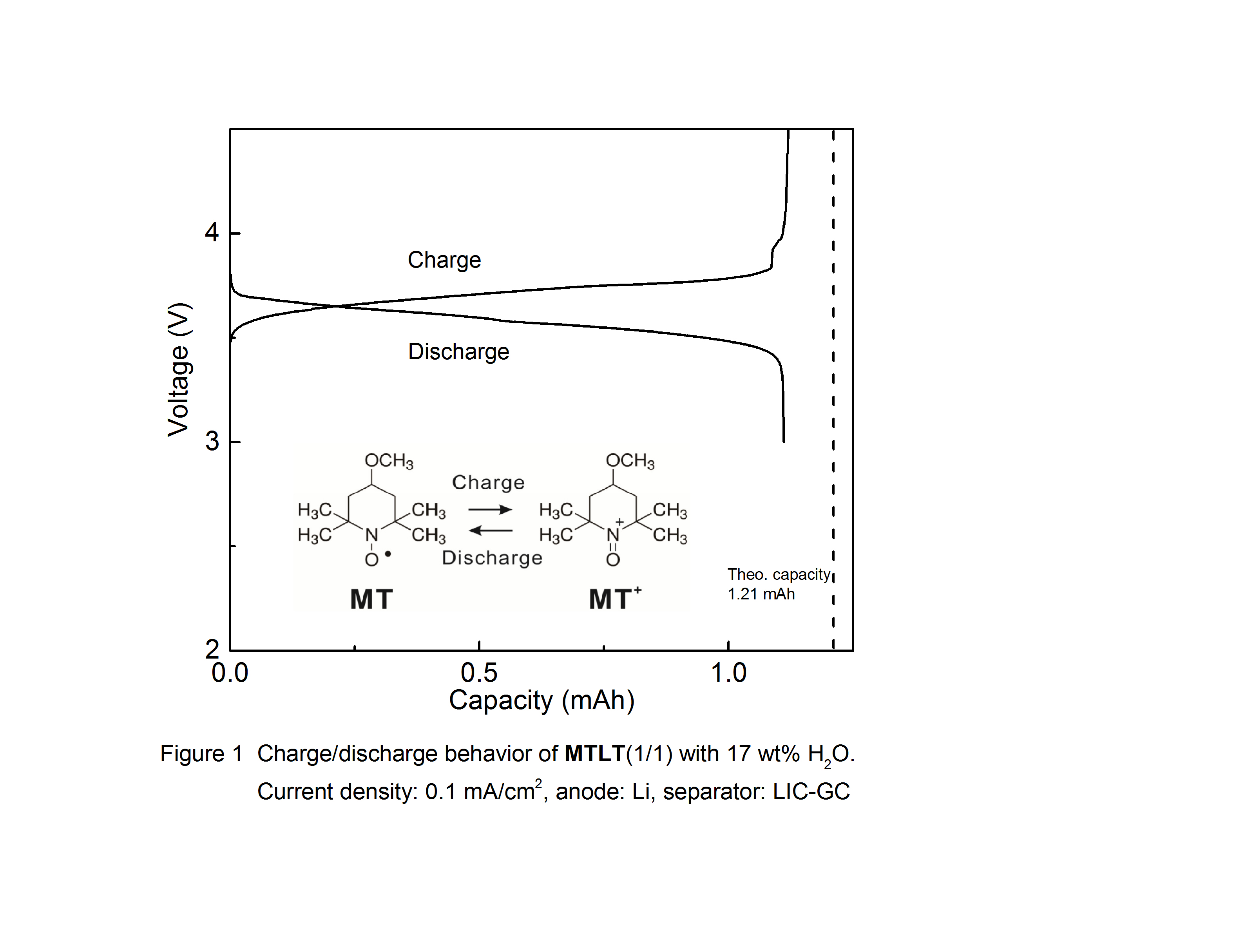