Conference Room 4E (Hilton Chicago)
S. I. Cordoba de Torresi (Universidade de Sao Paulo) and M. Vidotti (Universidade Federal do Parana)
Nowadays, nanotechnology promoted a high impulse to former areas of knowledge due to the simple reduction of crystallite size. New morphologies were created, leading to an increase in the performance or changes in the chemical properties of the materials. The increase of surface area/ volume ratio and also the change of properties because of size effects, generate great interest in nanostructured materials for different applications. One of the most studied nanomaterials is Nickel hydroxide, this material has a wide variety of applications focusing in alkaline batteries field and electrochromism. However, in order to stabilize the more electroactive α-Ni(OH)2 phase the use of additives such as Cobalt and Cadmium is very described in literature. Also it was reported the synthesis f the additive Ni(OH)2 by using ultrasonic radiation.

Although the synthesis of nanomaterials is a broad issue in literature and several methods have been reported, the development of easy handling and low cost techniques for the immobilization of nanomaterials, is necessary. Electrostatic layer-by-layer deposition technique (LbL) is a very well known method that consists in dipping the electrode in dilute solutions containing charged species such as polyanions and polycations. Assemblies involving nanoparticles and charged polymers were also reported in the literature, i.e. SiO2 nanoparticles and PDDA, Prussian blue nanoparticles and PAH or electrochromic polymers. The superficial electric charge presented by nanomaterials is also the basis for electrophoretic deposition (EPD), which is a traditional processing method in the ceramic industry. EPD is achieved by the motion of charged particles towards an opposite charged surface due an external applied electric field, and some parameters as deposition time, distance between electrodes and applied potential can be easily controlled in order to obtain different morphologies and thicknesses.

This work describes the deposition of doped nickel hydroxide nanoparticles onto transparent electrodes by using both LbL and EPD techniques and the electrochromic performance is compared. In Figure 1A it is shown the loss of charge observed by two different modified electrodes: doped-Ni(OH)2 nanoparticles immobilized by LbL (6 bilayers) and by EPD (E = 1.0 V cm-1 for 15 minutes); these electrodes were chosen due to their similar chromatic contrasts (Δ%T ~ 20%). It can be seen that the loss of charge is much smaller for EPD electrodes than for LbL ones. The electrodes modified by LbL accommodate a non-electroactive layer (PDDA) between two hydroxide layers that prejudices the ionic diffusion during redox reactions and the lack of electric connectivity between layers are also observed. In EPD deposition, these difficulties are overcome once the electroactive material is directly adsorbed onto the electrode surface leading to smaller loss of charge. Regarding the electrochromic performance of the films, a higher durability is observed, as seen in Figure 1B, where doped-Ni(OH)2 nanoparticles electrode modified by 15 minutes of EPD was submitted to repetitive electrochromic cycles, by applying +0.5V and -0.2V, over 20 hours without significant loss of contrast.

Table 1 summarizes the main characteristics of doped-Ni(OH)2 nanoparticles immobilized by different methods, LbL and electrophoretic deposition. Results are compared with those obtained with pure Ni(OH)2 nanoparticles modified electrode prepared by LbL. Many interesting points should be emphasized: for electrodes being equivalent in chromatic contrast (Δ%T ~ 20%), electrochromic efficiencies obtained for additivated nanoparticles are higher than for pure Ni(OH)2 ones, indicating the benefic effect of foreign atoms into the Ni(OH)2 structure. This is related to the shift of the electrochromic reaction Ni(II)/Ni(III) towards less positive potentials. On the other hand, electrodes prepared by EPD allow achieving faster switching times and higher stability upon successive coloration/bleaching cycles due to the intimate contact among nanoparticles and the absence of a non-electroactive layer between the hydroxide ones. Besides in EPD modified electrodes it was spent lower amount of charge related to the chromogenic changes, once the electric charge is directly related to the amount of material, it can be inferred that EPD produces attractive architectures for electrochromic processes. Finally, it is worth to mention that the easy handling of EPD technique leads to high performant electrochromic films prepared in only 15 minutes, while for obtaining equivalent films by LbL technique, more than one hour is needed. 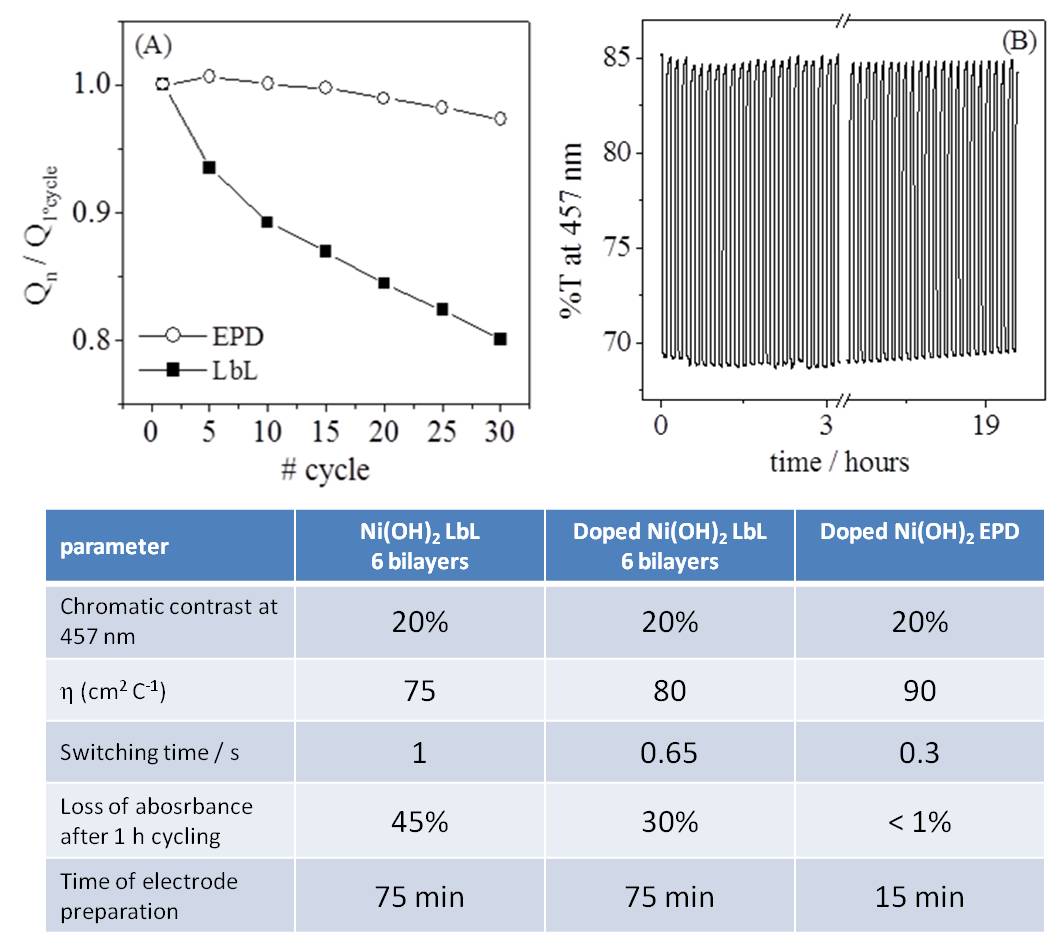