Pourbaix diagram for aqueous solution of thorium and uranyl, as presented in Figure 1, shows that Th4+ has pref-erential hydroxide formation if compared to (UO2)2+ in pHs greater than 3. For this, some beta/alpha ratio increase is fore-seen during uranyl electrodeposition. Considering lower pHs, there is a prevalence of ionic state for either cations Th4+ or (UO2)2+.

The present work made an extensive experimentation to obtain thorium precipitation as 234Th, which happens during uranyl reduction or hydroxyl precipitation. The experimental process was as indicated below:
1. Acidic solutions of 50mM [U] in UO2(NO3)2 in 2˗propanol (ionic solution: 140 experiments) and 50mM [U] UO2(NO3)2 in bidistilled water (aqueous solution: 98 experiments) with pH~1;
2. Direct cathodic polarization galvanostatic set at ˗100mA (110 experiments);
3. Pulsed cathodic polarization galvanostatic set at ˗100mA during 70 ms (“on”-stage) followed by 10 ms (“off”-stage) with a frequency of 12.5 Hz (128 experiments).

The 4-graph set in Figure 2 shows the main results of the 234Th electrodeposition by means of radioactive alpha and beta emission counting. From these results, it is re-markable that the direct polarization and aqueous solu-tion has no great effect in changing the beta/alpha ratio. The level of this ratio stayed under 10, which could be a sign of preferential electrodeposition of thorium as indi-cated in Pourbaix diagram. However, when 2˗propanol uranyl electrolyte was used associated with pulse polari-zation, the results showed drastic increase of beta/alpha ratio. It reached ratio levels above 100.

[Figure 2 – Results of ratio, varying with pH, from electrodeposi-tion experiments taking into account the solution type (aqueous and ionic) and the electrodeposition method (direct and pulsed). Experiments: 238 in total; 98 aqueous and 140 ionic; 110 using direct polarization and 128 using pulsed polarization.]

This association of pulse polarization and ionic electro-lyte under high cathodic polarization imposed variables that are important to build up the 234Th content obtained from uranyl-solution electrodeposition in very acidic 2-propanol media, under higher cathodic polarization. This occurrence might be linked to restrictions imposed by non-protonated process by using 2-propanol solution, hindrance of water electrolysis to produce hydroxyl near the cathode and H2 evolution4,5, which promotes very acidic media around the cathode and probable hydride formation in absence of hydroxyl. As a general idea, there is a likely co-reduction of Th4+ and U4+ co-reduction, forming hydride species. The co-reduction from uranium-VI (uranyl) to uranium-IV has a feasible condition under high acidic condition, low water electrolysis and non-equilibrium of high imposed cathodic polarization4,5. When there is an exhaustion of thorium deposition in the same solution, noticed by beta-counting decreasing, it is observed that uranium electrodeposition starts more promptly, discernible by alpha-counting increasing. 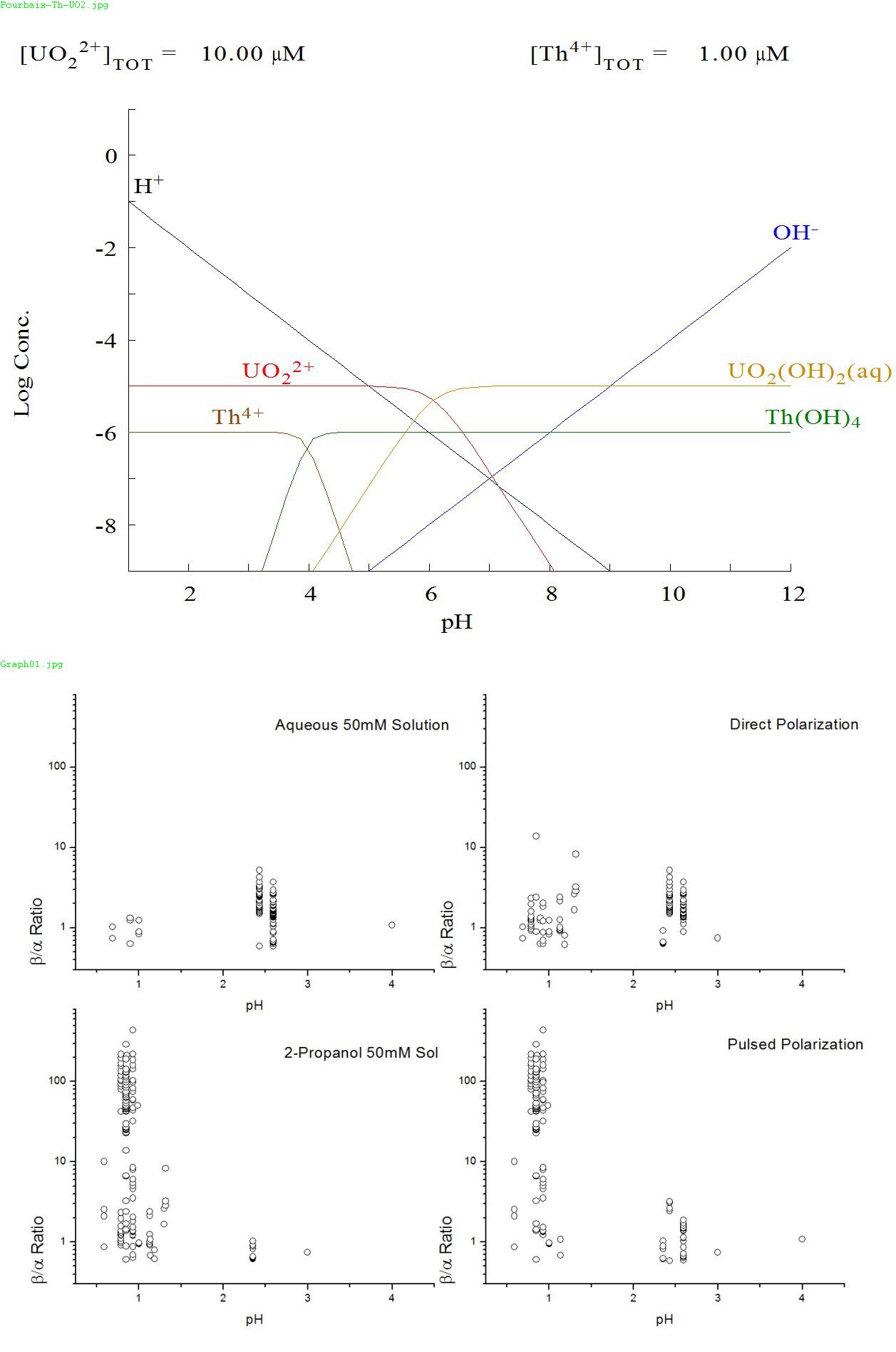