Salon A-1 (Hilton Chicago)
E. Allcorn and A. Manthiram (The University of Texas at Austin)
Introduction

As efforts are made to expand the application of lithium-ion cells into the realm of transportation and stationary storage, safety becomes one of the primary limiting concerns. Lithium-ion cells store a significant amount of energy, are composed of a number of flammable components, and battery systems based on lithium-ion technology can pose a significant flammability hazard if subjected to various abuse conditions or not properly designed. The primary cause of these safety issues is a condition known as thermal runaway, in which a cell undergoes self-sustaining exothermic reactions beginning at temperatures as low as 80 °C that results in uncontrolled temperature increase and eventual cell rupture or explosion. This is especially problematic in the large-scale applications mentioned above as such systems involve the close packing of a large number of cells, i.e.,  the heat output of one failed cell could result in a catastrophic chain reaction. While cathode reactions certainly contribute to this issue, it has been shown that the vast majority of the heat generated at low temperatures – that is the heat that initiates thermal runaway – arises from the anode.1 SEI layer degradation and the reaction of intercalated lithium with electrolyte are two primary sources of these exothermic reactions. While the composition of the SEI layer and subsequent thermal decomposition reactions have been well studied for graphite anodes, the similar SEI composition and reactions for alternative anodes are much less studied.

Antimony is one such material that has been studied as a promising anode material in both lithium-ion and sodium-ion battery applications. It has a higher reaction potential of ~ 0.8 V that allows for fast charge and upon simple enthalpic analysis should be more thermally stable than lower potential anodes like graphite and silicon. The goal in our current study is to characterize the thermal stability performance of Sb-based electrodes using DSC and the corresponding SEI layer composition with SEM, XRD, and XPS. To achieve an acceptable cycle life, Sb is often incorporated into an intermetallic and/or an active/inactive composite system. As such, in addition to the pure Sb anode, Cu2Sb, Cu2Sb-Al2O3-C, Cu2Sb-TiC, and Cu2Sb-TiC-C electrodes are also tested to determine the effect of these common cycle-life-enhancing techniques on the thermal stability of Sb-based anodes.

Jiang and Dahn have demonstrated the dependence of the heat of reaction between lithiated anode materials and organic electrolytes to be dependent upon reaction potential of the electrode.2 This decreased reactivity of lithium is not observed in our materials as both graphite and antimony show roughly equal heat generation of ~ 70 kJ per mole of Li. However, as shown in Figure 1, the greater storage of lithium per mass of antimony (lithiated phase of Li3Sb vs. LiC6) yields a lower rate of heat generation per gram for antimony as a function of lithium content. In other words there is less heat generation per unit gravimetric capacity. For other lithium alloy anode materials like silicon, which demonstrates reduced heat generation relative to graphite, only a fraction of the difference in heat generated was determined to be from the difference in electrode potential.3 The bulk of the variation was attributed to difference in the SEI layer morphology and composition between the two electrode materials. The potential presence of antimony compounds in the SEI layer or as reaction products to heating could alter the thermal stability of Sb in unforeseen ways, necessitating SEI composition study via XRD and/or XPS.

Figure 2 shows that the DSC profiles are similar for both lithiated graphite and antimony, which suggests similar decomposition routes for the two electrode materials. Both materials demonstrate a strong exothermic peak initiating near 150 °C with a tapering tail.

While the primary safety enhancement from Sb arises from greater lithium storage per unit mass, Cu2Sb shows a decreased reactivity of lithium with a heat generation of only 60 kJ per mole of Li, a 15 % decrease relative to both Sb and graphite. The decreased heat generation from Cu2Sb offers further hope that the incorporation of additional inactive material in the form of TiC or Al2O3 could further enhance the thermal stability of Sb electrodes. 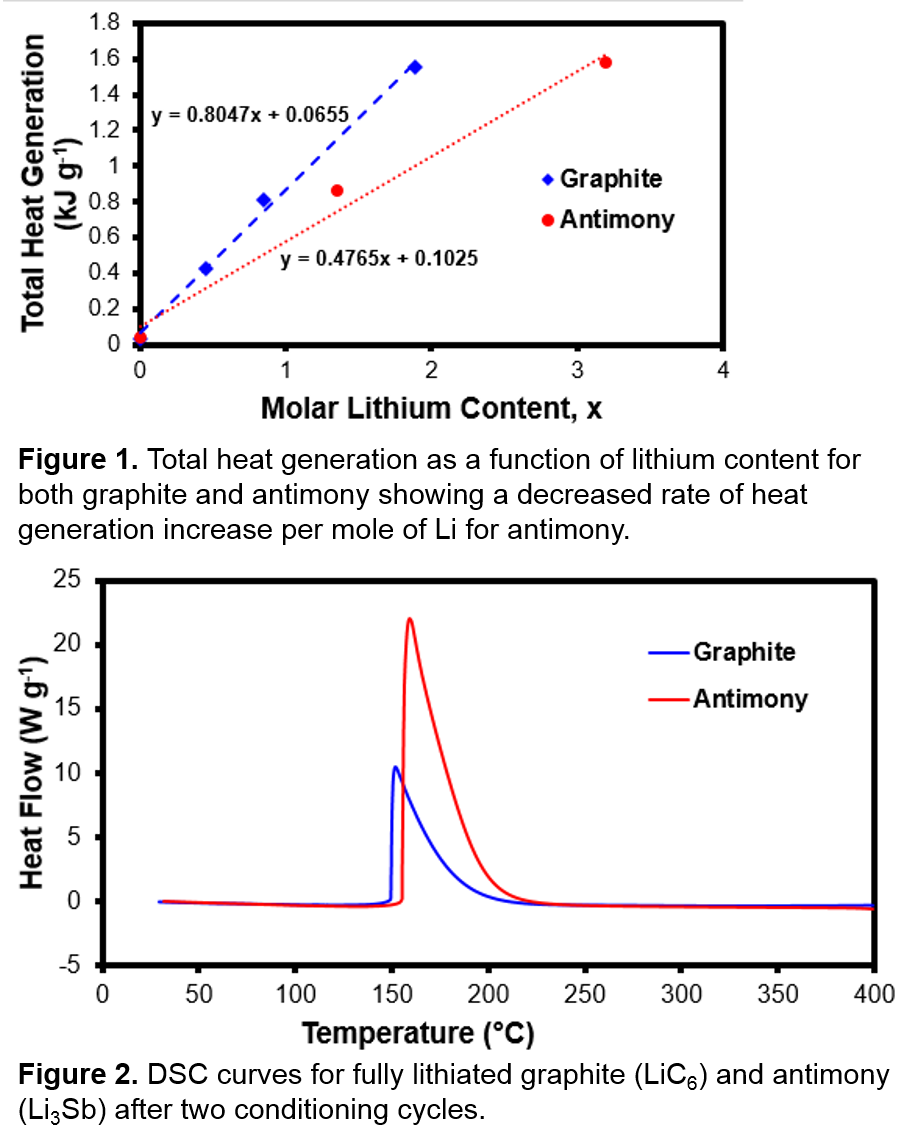