A major challenge of the rechargeable Mg batteries is that there is still lack of practical cathode materials.  Chevrel phase Mo6T8 (T = S, Se) compounds are only well-known materials showing high reversibility over hundreds of cycles at reasonably high rates [2].  Unfortunately, the Chevrel phase showed low operation voltage (1.2 V vs. Mg) and low capacity (122 mAh/g), and therefore lots of cathode candidates have been extensively investigated to improve the capacity as well as the operating voltage, aiming a higher energy density battery system.  Some candidates beyond the Chevrel phase have been found to date, however still on an exploratory level.  The main issue is sluggish diffusion of Mg2+ in the host structure, retarding findings of potential cathode materials.  On the other hand, we found that some cathode materials have not been monitored properly because of high impedance caused by a Mg metal anode / electrolyte interface.  Figure 1 shows the Nyquist plots of a symmetrical Mg/Mg cell with PhMgCl-AlCl3 (APC) electrolyte as a function of holding time under open circuit voltage.  Inset figure shows the Nyquist plot of the same symmetrical cell under a bias voltage of 150 mV after holding for 12 h.  As can be seen, the interfacial resistance between Mg metal and electrolyte was getting bigger and bigger with holding time even under open circuit voltage.  However, once a bias voltage was applied for the cell, the observed impedance drastically decreased [3].  As a result, such huge impedance potentially veiled any electrochemical responses for the entire cell, which may regard as no possibility of cathode materials.  The interfacial issue on a Mg metal anode has been pointed out by Prof. Aurbach et al [4,5].  Here, we newly found that the huge impedance was switchable under open circuit and bias potentials in the currently-developed Mg battery electrolytes, and then strongly depended on electrochemical states [6].  Thus, mechanistic understanding of the interface between Mg metal and electrolyte is significantly important to find out future cathode materials as well as to develop highly stable electrolytes which are compatible with Mg deposition and dissolution. 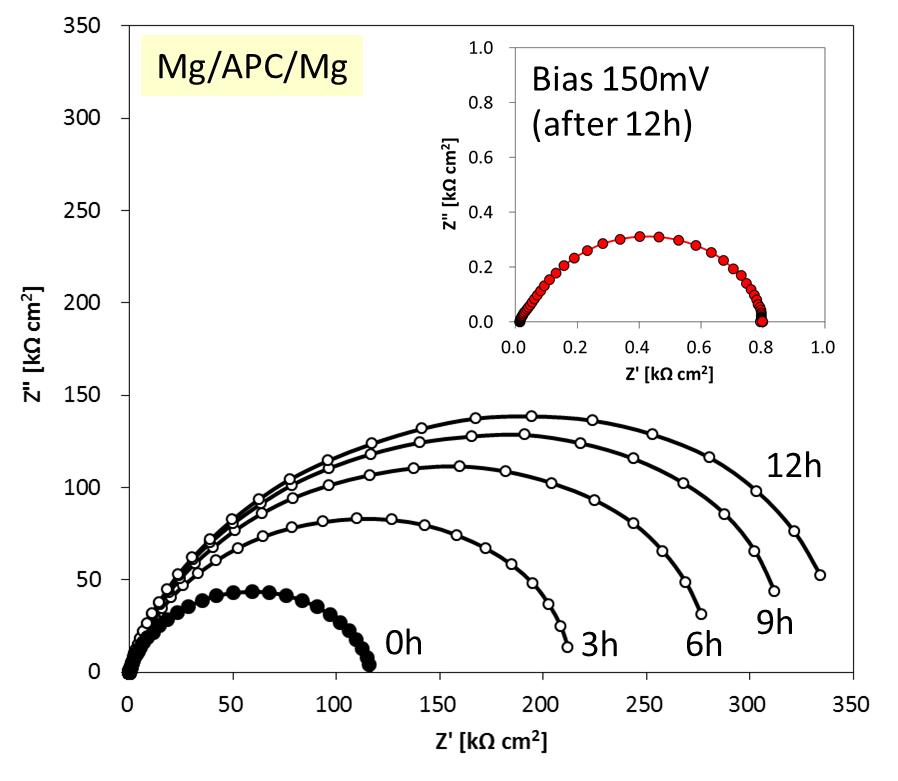