Continental Room B (Hilton Chicago)
G. Gourdin, J. Collins, D. Zheng, M. Foster (University of Massachusetts Boston), and D. Qu (University of Massachusetts - Boston)
While electrochemical double-layer capacitors (EDLC) are well suited to time-dependent high-power output applications,1 they are much more limited in terms of their overall energy density, when compared to lithium ion batteries.2 The lithium ion capacitor (LIC), a hybrid asymmetric supercapacitor that employs a lithiated carbon as the negative electrode (faradaic storage) and a high surface area carbon as the positive electrode (capacitive storage), can help to bridge that gap. However just as with lithium ion batteries, the formation of the SEI layer during primary lithiation of the negative electrode is a key factor in the development of a LIC.

In previously reported work, an in-situ electrochemical-mass spectroscopic (MS) technique was used to investigate the composition of the gases that are generated during the primary lithiation process.3 From that analysis, it was concluded that the generation of the gaseous by-products comes as a result of two 1-electron reduction reactions. The radical anion that is first produced from the first reduction can undergo one of two terminal reaction pathways, the selection of which is dependent upon the cell potential.

The focus of this work was to continue that investigation by performing a systematic analysis of the composition of the electrolyte during the primary lithiation of the carbon negative electrode. The negative electrodes for a LIC were prepared from a carbon film that was composed of an activated carbon powder, carbon black and PVDF for use as the binder. The experiments were performed such that the lithiation of the carbon electrode was halted at different cell potentials during the process to study how the composition of the electrolyte changed during the initial SEI layer formation. At each hold potential stage the electrolyte within the cell was gently and thoroughly mixed, after which a 5-μL aliquot was then removed and diluted for analysis by LC-MS.

The results from the LC-MS analysis of the electrolyte were correlated with DRIFTS analyses of the developing SEI layer and the results of the gas-phase and EIS analyses previously reported.3 It was determined that other decomposition reactions gave rise to unique compounds that would be expected to have an effect on the performance of the electrolyte. An in-depth analysis of the spectral data from twelve significant peaks noted in the chromatographic data was performed to determine probable empirical formulas. Using that information and the work of the Laruelle group,4 structures of these compounds and possible mechanisms that could account for their formation were determined. On the basis of their proposed structures, these compounds possess structural similarities to compounds that have been identified as components of the SEI layer.5 In addition, while the rates of formation of these electrolyte-soluble compounds exhibited a correlation with the cell potential, the potentials at which formation of these compounds is initiated varies significantly. The analysis of the composition of the electrolyte and how it changed during SEI layer formation provided an opportunity to gain further insight into the electrochemical processes that form the SEI layer.

Figure 1: LC-MS chromatogram of the electrolyte after the lithiation process. 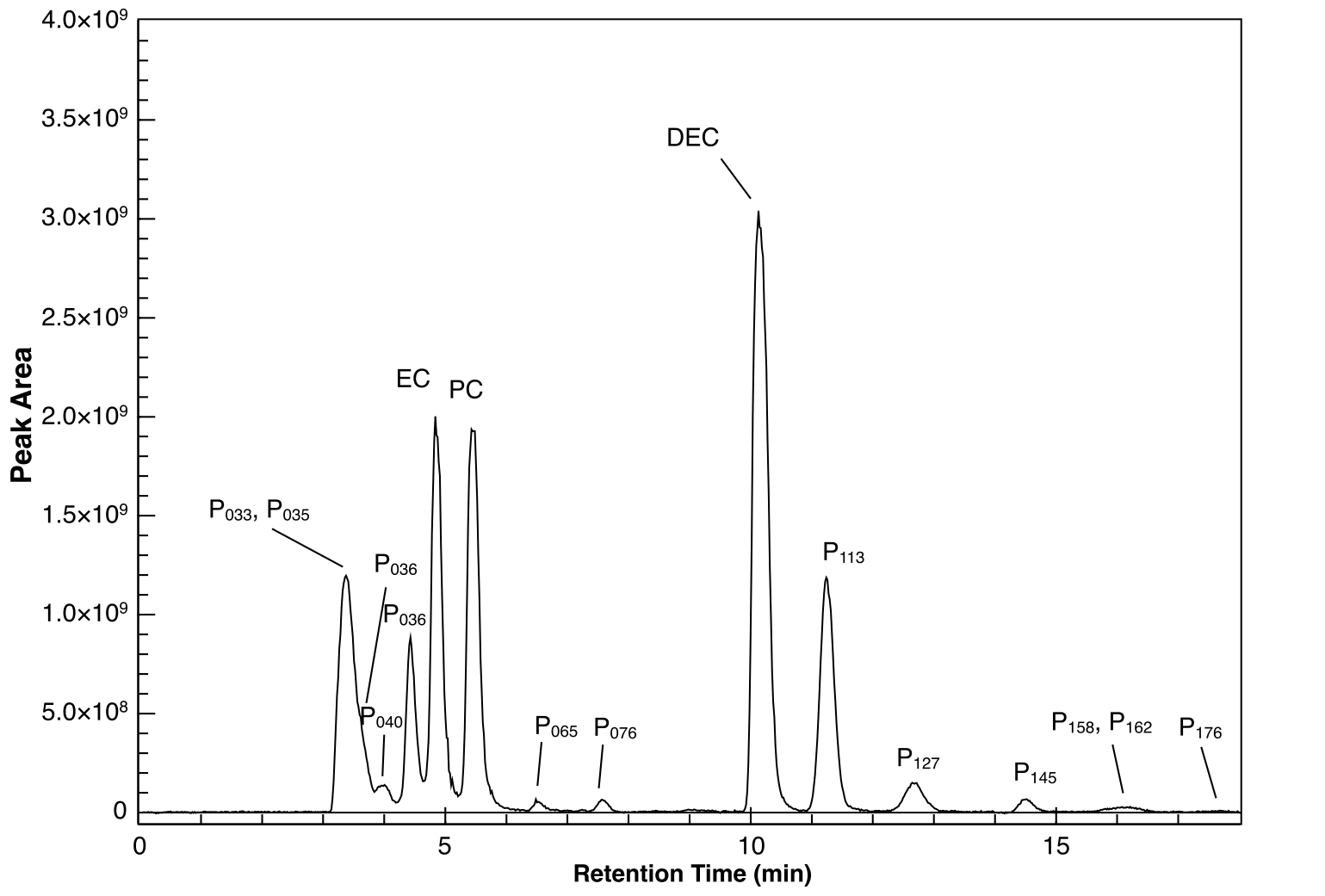