Salon A-5 (Hilton Chicago)
G. Singh (CIC energigune), F. Aguesse (CIC Energigune), L. Otaegui (CIC energiGUNE), E. Goikolea (CIC Energigune), E. C. Gonzalo (CIC EnergiGUNE), J. Ségalini (CIC Energigune), and T. Rojo (CIC energiGUNE)
Lithium ion batteries have dominated the world of batteries from the last couple of decades [1]. They had outsmarted the sodium ion batteries at the research level due to their higher energy density compared to the sodium ion batteries. However due to the increasing demand of the inexpensive technology which does not use inexpensive elements is attracting back the sodium ion battery research efforts [2]. This is because of the homogeneously and enriched source of sodium across the world. Sodium ion battery has been evolving on the footprints of the lithium ion battery technology because of the similar mechanisms that occur in the materials. Many compounds have been studied in the literature that shows good electrochemical performance for room temperature sodium ion batteries. Among the various available options, oxides have always attracted the cathode materials’ development due to their ease of synthesis, good tap density and high energy density. However due to the various structural transitions that occur in the sodium metal oxides during the insertion/extraction of sodium ions, generally the steps in the charge/discharge profile have been observed. Secondly the electrolyte decomposition has always been an issue when the materials operate at high voltages. In the present study we have tried to develop electrode materials which show smooth voltage profile in the narrow voltage zone.

NaFeO2 has been explored as one of the candidate for the cathode materials. However initial capacity is limited to ~ 80 mAh/g with a flat voltage profile at 3.3 V [3]. Voltage cutoffs show a severe effect on the stability of the electrode material. A solid solution of NaFeO2 with NaNiO2 studied recently has shown good electrochemical properties with the average operating potential at ~ 3.0 V. Capacity falls to 30% of its initial values in the 30 cycles [4]. In the present study we have shown the electrochemical behavior of the NaFex(Ni0.5Ti0.5)1-xO2 (x = 0.2 and 0.4) series of compounds. Samples have been synthesized by conventional solid state reaction and have been characterized by various tools [5]. Desired composition of the electrode material has been checked by performing ICP -OES measurements. X-ray diffraction has shown the formation of the O3 type layered structure with R3-m space group symmetry. Morphology of the synthesized material has been characterized by using scanning electron microscope, which shows the formation of the agglomerated submicron size particles. Electrochemical properties of the material have been checked by performing galvanostatic charge/discharge measurements in the classical CR2032 coin cells. Similar to α-NaFeO2voltage cutoff limits have severe impact on the structural changes and hence the electrochemical properties as shown in Figure 1. Initial discharge capacity of ~120 mAh/g is observed in the narrow voltage window 3.75 - 2.6V as shown in Figure 2. Ex-situ structural analysis shows the dependence of hexagonal to monoclinic structural transformation on the finally observed composition. Most importantly a smooth charge/discharge profile without a sharp kink has been observed with a very low polarization. Effect of the electrolyte on the electrochemical performance of the material will also be demonstrated.

Figure 1. Effect of cutoff voltage on the irreversible capacity and polarization.

Figure 2. Charge/discharge curves of NaFe0.4Ni0.3Ti0.3O2 using 1M NaFSI in PC as electrolyte. Inset shows the cycling stability of the electrode material in the half cell configuration where Na acts as counter electrode for the first 30 cycles. 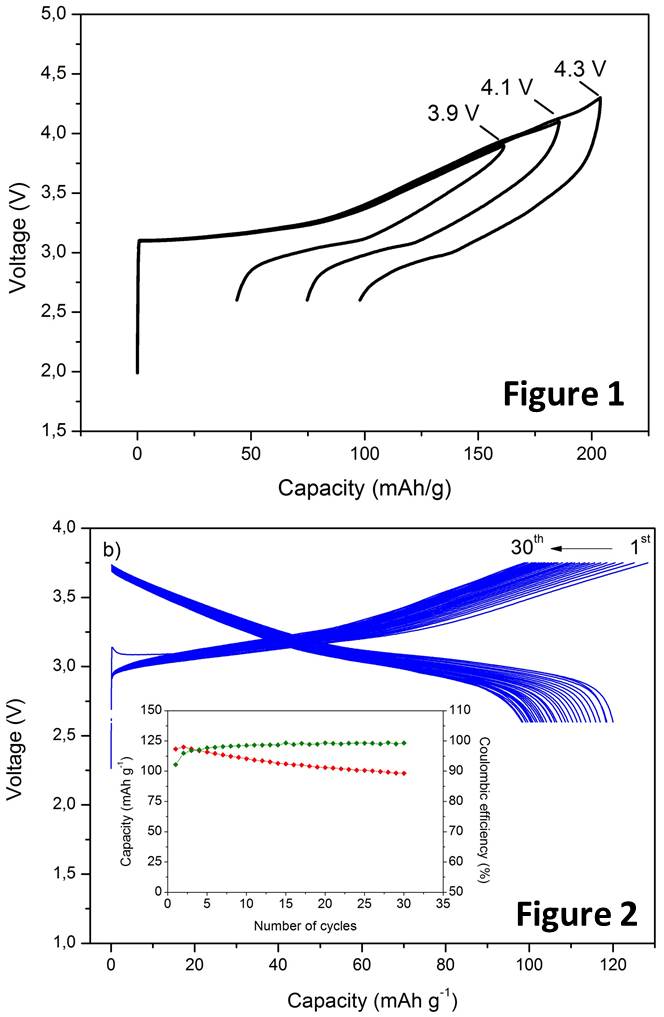