Electropolishing is attractive for the preparation of Nitinol surfaces due to improvements in corrosion resistance, biocompatibility and surface quality when compared with other surface preparation methodologies.[i]  Traditionally, processing of these materials has been carried out in hazardous chemicals such as hydrofluoric acid, or fluoride salts that convert to hydrofluoric acid,[ii]  to electropolish and passivate the device and achieve the surface finish required for insertion into the body. The inclusion of hydrofluoric acid, in addition to concentrated sulfuric-phosphoric acids, makes for an extremely hazardous working environment. Alternatively, non-aqueous electrolytes such as methanol-perchloric acid[iii] or methanol-sulfuric acid[iv] mixtures have been suggested, but these require low-moisture environments and low-temperatures (-10 °C) and industrial implementation is difficult.

The current work demonstrates that Nitinol surfaces may be electropolished in simple, aqueous electrolytes using pulse and pulse/reverse electric fields.  Electropolishing of Nitinol has been done in dilute sulfuric acid solutions (5-10%) as well as salt electrolytes using pulse/pulse reverse voltage fields under ambient conditions.  This work has been demonstrated for Nitinol coupons, wires and shape sets; processing of these surfaces will be discussed.

Implementation of a Nitinol wire manufacturing process is an important step in the fabrication of these devices for medical use.  Scale up of Nitinol wire electropolishing in terms of apparatus is also currently underway and will be discussed.  In the current work, a reel-to-reel apparatus will be utilized to facilitate scale-up activities.  A schematic of the reel-to-reel apparatus is shown in the accompanying image.  The apparatus design is straight-forward due to limited considerations needed for processing under ambient conditions in simple aqueous electrolytes.  Important cell considerations such as cathode configuration and residence time will be discussed along with processing considerations.  This method is applicable to other medical alloy wires, devices and implants. 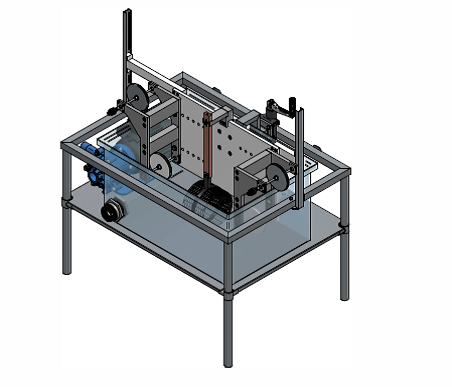