Na is in the same element group with Li and its diameter is only ~40% larger than a Li ion.1-2 Therefore, it is believed that it has very similar intercalation chemistry in Na-ion batteries as Li in Li-ion batteries. Hard carbon is a promising anode material for both Li-ion and Na-ion intercalation and has almost similar specific discharge capacity.3 Yet, it has been reported that the Na ions and Li ions are quite different when intercalating into hard carbon and the solid state interphase (SEI) on hard carbon anodes has different composition/morphology for Na and Li ions.4-5In this work, we further elucidate how the solid electrolyte interlayer can induce significant difference in the intercalation of Na-ion and Li-ion into hard carbon and hence lead to significant difference in the discharge capacity. Electrolyte additive effect was also investigated.

The authors would like to acknowledge financial support from the U.S. Department of Energy’s (DOE’s) Office of Electricity Delivery & Energy Reliability (OE) (under Contract No. 57558). (A portion of) The research was performed using EMSL, a national scientific user facility sponsored by the Department of Energy's Office of Biological and Environmental Research and located at Pacific Northwest National Laboratory. 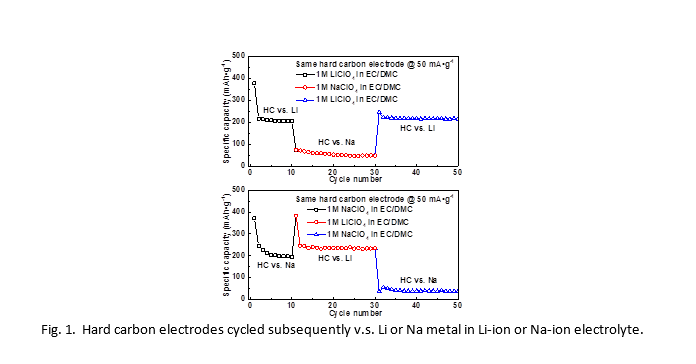