Salon C (Hilton Chicago)
N. Y. Labrador, W. A. S. Agata (Columbia University), and D. Esposito (National Institute of Standards and Technology, Columbia University)
The major hurdle limiting the widespread use of intermittent renewable solar energy is the lack of efficient and cost-effective energy storage. Photoelectrochemical (PEC) water splitting offers one solution towards producing storable solar fuels like hydrogen. However, commercialization of PEC technology is inhibited by challenges to identify and develop photoelectrodes that are stable, efficient, and made from low-cost materials. Unique to this project is the metal-insulator-semiconductor (MIS) architecture used to decouple the efficiency and stability tradeoff that typically limits conventional photoelectrodes (Fig. 1).(1,2,3,4)  Within this design, a narrow band gap semiconductor efficiently absorbs light and a thin insulating layer protects against corrosion. Meanwhile, metal particles deposited on the insulating layer collect photogenerated electrons and catalyze the water splitting reaction. If the metal deposited is discontinuous and smaller than the wavelength of incident photons, the particles will be effectively optically transparent and will not significantly affect the light absorption properties of the semiconductor.(5) In this work, we perform a systematic study of platinum electrodeposition on p-Si-based photocathodes to better understand electrodeposition on the MIS platform and to optimize nanoparticle size, density, and spacing to improve hydrogen evolution reaction (HER) performance.

In order to fabricate well-defined, uniform MIS geometries the electrodeposition process must be finely tuned to control structure properties. Important to this goal is a deep understanding of the nucleation and growth behavior of the catalytic metal particles, and balancing the two processes through pulsed electrodeposition to control particle density and size. In order to nucleate on bare SiO2, a critical voltage or energy must be reached to electrodeposit platinum on the oxide surface. Once nucleated, particles deposited in this regime will continue to grow while additional particles are simultaneously nucleated nearby. By contrast, electrodeposition at a more positive potential will lead to preferential growth of existing particles rather than nucleation of additional particles.

To elucidate these regimes, two consecutive linear sweep voltammograms were performed in the electrodeposition electrolyte. As the scans sweep the potential more negative than E0[PtCl4]2-/Pt = 0.755 V, an onset potential for the reduction reaction/deposition can be seen. In Figure 2, the first scan in the electrodeposition solution reveals the potential required to nucleate Pt species onto bare SiO2 (1. nucleation), whereas the second scan defines a growth regime where Pt species preferentially reduce onto Pt particles (2. growth).  Our goal is to nucleate then grow platinum nanoparticles to control density and size, respectively.

Figure 3 verifies this control over particle density/size through a two-step deposition. The controlled pulsed deposition (Fig 3a top) shows a lower density and smaller particle size than the deposition at a constant potential in the nucleation regime (Fig 3b bottom). Additionally, the electrode with the controlled deposition demonstrated an improved photoelectrochemical performance in comparison with the higher density electrode. This is a result of enhanced light absorption. Using this knowledge of nucleation and growth, we can create MIS photoelectrodes with optimal catalyst particle spacing, surface area, and optical properties for enhanced HER performance. 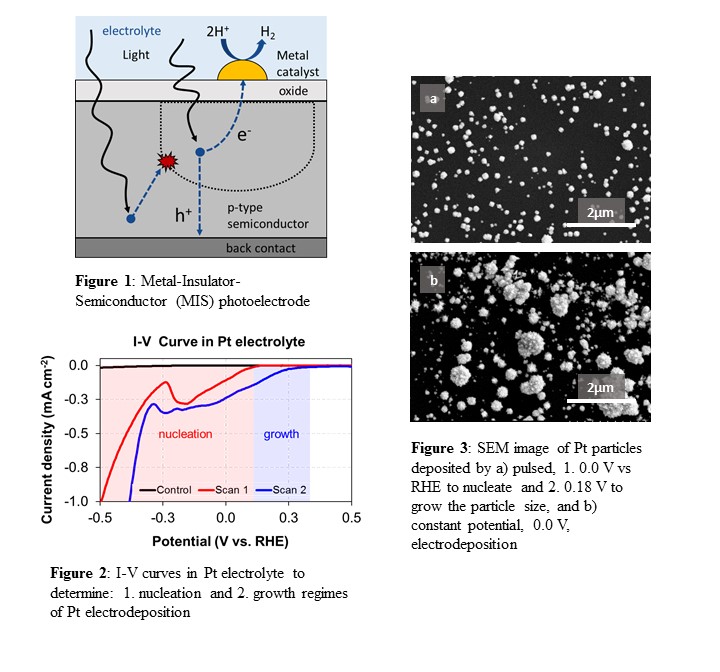