As the key material of proton exchange membrane fuel cell (PEMFC), the carbon supported Pt nanoparticles are the most widely used catalyst for cathode and anode of PEMFC1. Unfortunately, the corrosion of the carbon support can lead to a decrease of catalyst performance, stability and lifetime. And then, the research on unsupported Pt catalyst is very important for the commercialization of PEMFC.

We firstly prepared PtO2 colloidal solution and an unsupported Pt catalyst was obtained by the reduction of PtO2 colloidal solution. The microstructure and morphology of samples were characterized transmission electron microscopy(TEM). The electrocatalytic performances were measured by cyclic voltammetry(CV), linear sweep voltammetry(LSV) techniques. Reaction time, temperature and pH value have significant influence on catalyst performance. The results were compared with Pt/C-JM.TEM results show that average particle size of this catalyst is 2.46 nm. After treatment at 50 oC for 1h in H2 andN2 mixture (VN2:VH2=9:1), the ECA increased to 43.15 m2·g-1. It has high oxygen reduction reaction (ORR) onset reduction potential (0.98 V).

The authors acknowledge the support from the National Natural Science Foundation of China (21006073), the Scholarship Council and the Fundamental Research Funds for the Central Universities at Tongji University. 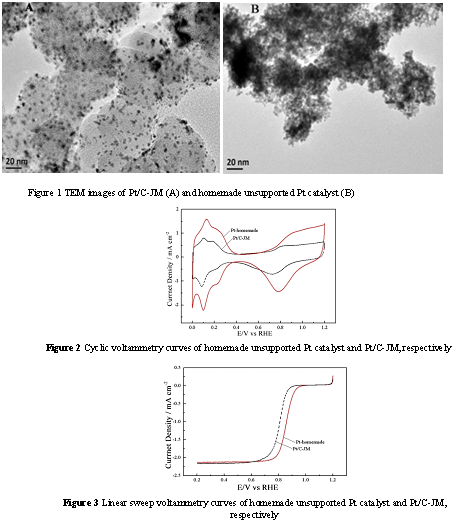