In this paper, varies of surface modification methods for MWNTs,such as oil-bath acidic reflux, ultrasonic and microwave treatment, were systematically studied,and the oxygen reduction activity of those treated MWNTs were measured. The results showed that surface modified MWNTs have better oxygen reduction reaction activity than the as received MWNTs. Among those treatments, microwave treated MWNTs have better performance than other treatments. Next step buckypaper will be prepared by surface modified MWNTs. As surface modification can also enhance the dispersion of the catalyst2, it has a potential to show good ORR performance in a low Pt loading thus reduce the cost of catalyst.

The authors acknowledge the support from the Shanghai Rising-Star Program (11QA1407200), the National Natural Science Foundation of China (21006073), the Scholarship Council and the Fundamental Research Funds for the Central Universities at Tongji University. 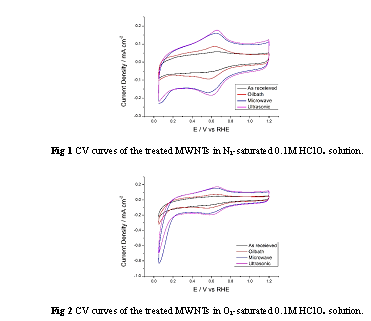