Lake Huron (Hilton Chicago)
T. Chowdhury and H. Grebel (New Jersey Institute of Technology)
Electrochemical cells consist of two half-cells: one is containing an anode and the other is containing a cathode.  In order to maintain charge flow within the cell, a salt bridge is placed between the two half-cells.  We replaced the salt-bridge by a third electrode - a conductive and permeable gate electrode.  A bias potential was then applied to this gate electrode: in that way, we were able to control the external current of the cell.  This would be the first step towards the realization of ion transistors.

In the present studies, several gate electrodes were considered: p-type and n-type layers of functionalized carbon nanotubes (CNT) and metal plate capacitors.  Cyclic voltammetry and electrochemical impedance spectroscopy revealed the effect of the gate bias on the effective capacitance and impedance of the cell.

Current-Voltage measurements (I-V curves) were made on the layered structures, which were consisted of p-type and n-type CNT.  These data clearly exhibited the formation of barrier(s) between the two layers.  Cyclic voltammetry (CV) measurements were carried out using an electrochemical workstation (CHI760C, Electrochemical Instrument) at room temperature and using 0.01 M solution of NaCl as electrolyte.  Various scan rates of 0.01, 0.05, 0.1 and 0.5 Vs-1, were assessed.  Two graphite rods, one serving as a working and the other, as a counter electrode, were used.  Ag/AgCl (3M KCl filled) electrode served as the reference.  The gate electrode was placed in the middle of the cell, between the working and counter electrodes.  The corresponding specific capacitances were calculated from the CV data.

Electrochemical impedance spectroscopy (EIS) was performed for each of the gate electrodes, as well.  The data were taken at a dc bias of 0.24 V with a small sinusoidal signal perturbation over sub- to Kilo-Hertz (sub-Hz to KHz) frequency range. As expected, the capacitive behavior was more pronounced at low frequencies. Membranes composed of p-i-n structures - a p-type layer of CNT, followed by an insulating layer of PMMA and finished by an n-type CNT, all deposited on a 10-micron Teflon filter substrate - exhibited the largest capacitance compared to p-n layered membranes, or metallic capacitors.

Chrono-potentiometry was performed on the gate electrodes. The results corroborated the preveious data, namely, the p-i-n samples were better capacitors than the other two electrode types.  Its values, in milli-Farad (mF) range, were similar to the values obtained by cyclic voltammetry and electrochemical impedance spectroscopy.

In summary, we assessed several types of permeable and conductive gate-electrodes in terms of their capacitance and resistance.  The better structures were composed of p-i-n junctions. 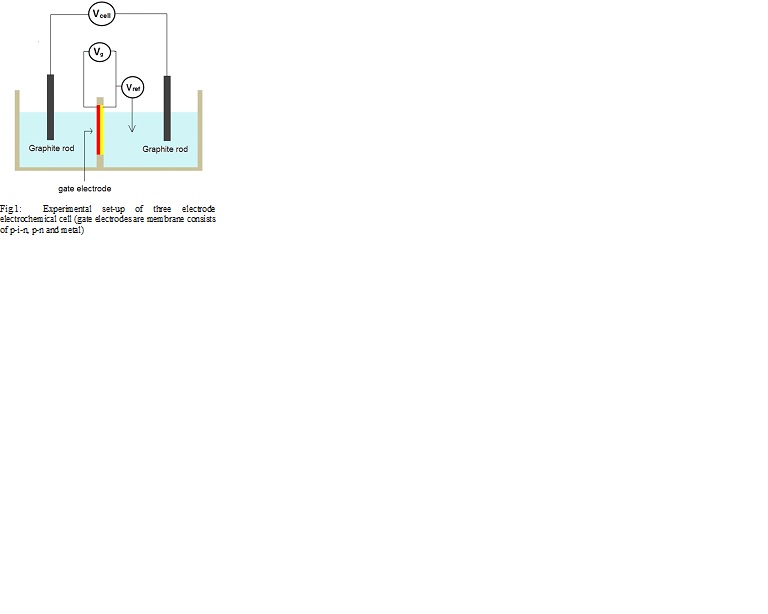