Salon A-2 (Hilton Chicago)
M. Mehta (Florida State University, Aeropropulsion, Mechatronics and Energy Center), V. V. Bevara (Florida State University, Aero propulsion, Mechatronics and Energy), and P. Andrei (Florida State University)
There has been a growing interest in electrochemical storages devices such as batteries, fuel cells and supercapacitors in recent years. This interest is due to our growing dependence on electronic devices and on the high demand for energy storage from the electric transport vehicles and electrical power grid industries. As we transition towards cleaner renewable fuel sources such as solar, wind, tidal, etc. our dependence on energy storage devices will continue to grow. Li-air offers much higher energy density among the present known electrochemical storage devices. However, these batteries currently suffer from a number of critical issues such as low number of charge-discharge cycles and the practical energy density is lower than the theoretical energy density. The deposition of lithium peroxide on the surface of the cathode is one of the main causes for low practical specific capacities of lithium-air batteries with organic electrolyte.

Recently, we have developed a finite element model (FEM) for computing the electrochemical impedance spectra (EIS) for Li-air batteries with organic electrolyte with the double layer [1]. The FEM is based on the theory of concentrated solutions and provides an accurate description of lithium-ion and oxygen diffusion in the anode, separator and the cathode regions. It also takes into account the electron conductivity in the carbon cathode and Butler-Volmer kinetics at anode and cathode, but neglects the effects of deposition of discharge products. The impedance spectra are computed by applying small-signal linear perturbations to the transport equations and solving the final linear system of equations numerically. The FEM model is implemented numerically in our in-house simulation platform RandFlux. The model can predict the impedance response at low d.c. currents and low discharges, when the reaction product formation is not significant and the deposition is uniform, however these assumptions fail in the regime of medium or high d.c. currents and deep discharges.

In this presentation we expand the model presented in [1] to include the effects of discharge products. The model considers different physical and structural properties of the cathode such as surface to volume ratio (specific area), porosity, pore structure and pore size distribution, and the conductivity of the discharge layer (using an exponential approximation of quantum tunneling effects [2]) to describe the deposition of Li2O2 inside the cathode. 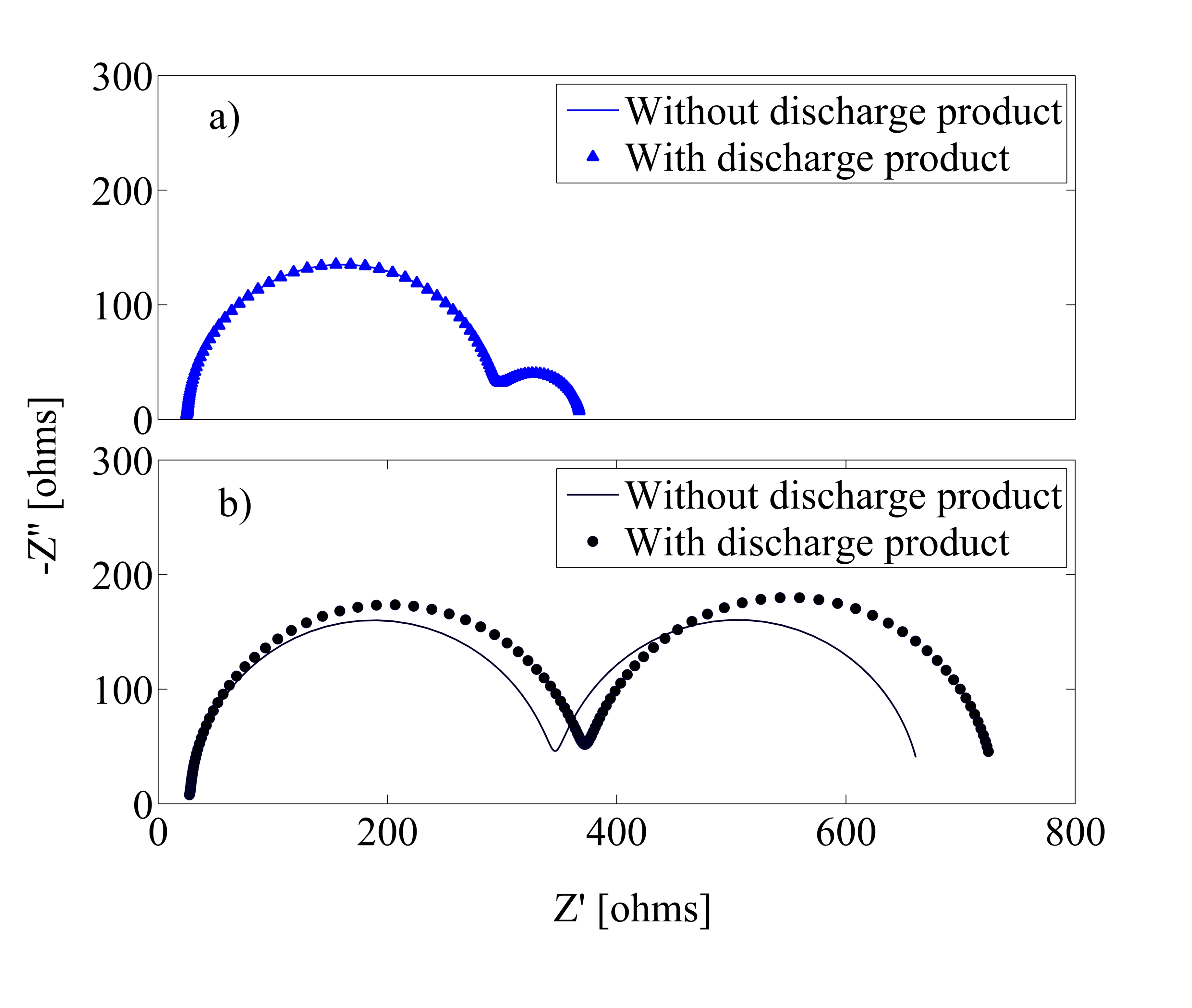