Salon A-2 (Hilton Chicago)
J. Guo (University of California, Riverside) and C. Fu (University of California at Riverside)
Lithium-sulfur (Li-S) battery has been an extensively investigated rechargeable battery technology in the past decade. The Li-S electrochemical reactions in liquid electrolytes involve very complex processes, which are not fully understood to date. Therefore, this study investigated the fundamental interactions between sulfur, porous carbon hosts, and electrolytes during the lithium-sulfur electrochemical processes.

To understand the effects of sulfur confinement in the porous carbon, four microporous carbon fibers (CFs) with different pore sizes were investigated as the host materials for sulfur. Sulfur was infused into the carbon host via the conventional liquid phase infusion at 155 degree Celsius. It was found through thermogravimetric analysis (TGA) that there were two populations of sulfur in the microporous carbon host: superficial sulfur and sulfur confined inside the pores, which has distinctly higher evaporation temperature than the superficial population. We demonstrated that the Li-S electrochemical behavior was profoundly influenced by the ratio of these two populations: After removing the superficial sulfur in the CF with pore size smaller than 1 nm (denoted as CF10), the resulting composite (denoted as CF10-S), which only had sulfur confined in the sub-nano pores, showed distinctly different behavior from the conventional sulfur cathodes. As the cyclic voltammetry (CV) curve shown in Figure a, the CV curve of CF10-S only showed one cathodic peak at 1.5 V and one corresponding anodic peak at 2.0 V versus Li/Li+. The galvanostatic discharge-charge (GDC) curves of CF10-S were also consistent with the CV showing a single discharge slope and a single charge slope. In addition to the conventional ether-based electrolyte (1 M LiTFSI in tetraglyme was used in this study), carbonate-based electrolyte (1M LiPF6 in 1:1 EC/DEC) also could be used for CF10-S composite as shown in Figure c and d. The behaviors of CF10-S in tetraglyme and EC/DEC are almost identical.

When we infused 43 wt.% sulfur into CF10 (denoted as CF10-43S), which had 13 wt.% superficial sulfur, the resulting electrochemical behaviors remained the same as shown in the Figures a to d, however, with reduced capacity in both electrolytes and inferior kinetics in EC/DEC indicated by the CV curve in Figure c. When we further increased the total sulfur content to 60 wt.% (denoted as CF10-60S), the electrochemical behavior of CF10-60S in tetraglyme appeared to be a combination of the sulfur confined in sub-nano pores and the conventional sulfur (the superficial population): As shown in Figure a, CF10-60S showed two cathodic peaks at 2.0 V and 1.3 V and two corresponding anodic peaks at 2.0 V and 2.5 V, respectively. The GDC curves of CF10-60S essentially demonstrated the same behavior with a discharge plateau at 2.0 V and a discharge slope around 1.5 V. Meanwhile, the CV curve of CF10-60S in EC/DEC still demonstrated electrochemical reactivity, but the GDC curves showed very limited available capacity. Finally, when we infused 80 wt.% sulfur into CF10, the resulting composite (denoted as CF10-80S) had a majority superficial population of 50 wt.%. The electrochemical behaviors of CF10-80S in tetraglyme including CV and GDC curves demonstrated the conventional characteristics of Li-S reactions as shown in Figures a and b. Meanwhile, CF10-80S did not show much reactivity in the EC/DEC electrolyte as shown in Figures c and d. Based on these observation, it could be concluded that the nano-confinement of sulfur dictated the Li-S electrochemical reaction. Sub-nano sulfur confinement resulted in different Li-S reaction mechanisms, and enabling the utilization of unconventional carbonate-based electrolytes. 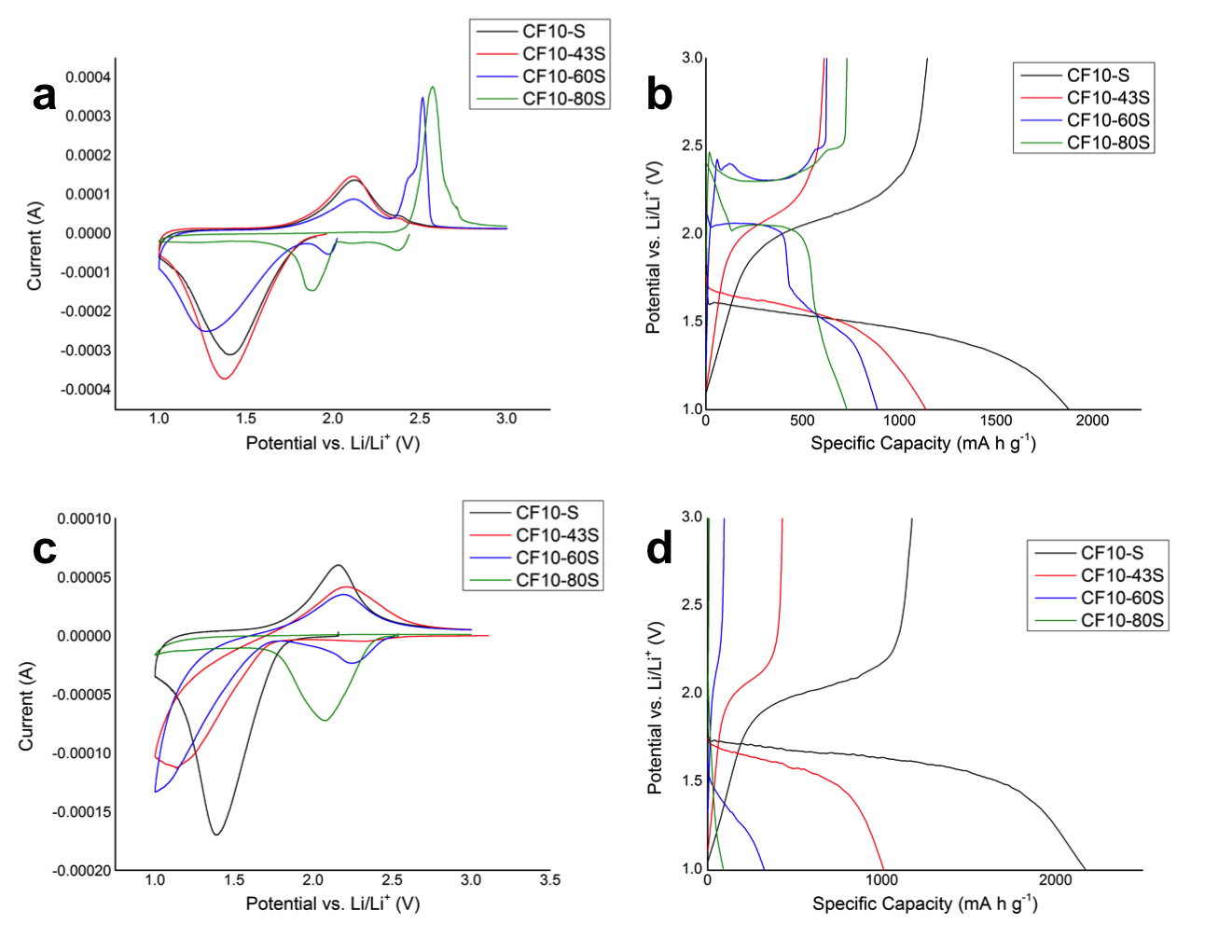