329
Beyond State of the Art: A Family of Novel and Highly Performing Electrolytes for Rechargeable Magnesium Batteries Based on Boron-Hydrogen Compounds

Salon A-3 (Hilton Chicago)
R. Mohtadi, O. Tutusaus, T. S. Arthur, R. Zhang (Toyota Research Institute of North America), T. Carter (University of Michigan), and F. Mizuno (Toyota Research Institute of North America)
Owing to a high volumetric capacity (3833 mAh cm-3 vs. 2046 mAh mAh cm-3 for Li), absence of dendrites formation and lower cost of Mg metal (about 10 times cheaper than Li), rechargeable magnesium batteries have been receiving an increased attention.  One major challenge facing these batteries is related to the electrolytes as they are restricted to a handful of corrosive halogen based magnesium reagents and complexes.  Electrolytes based on conventional inorganic and ionic Mg salts, such as MgClO4, were found unsuitable due to their instability in the reducing environment of the Mg anode resulting in complete Mg passivation [1]. Overcoming the hurdles with current electrolytes calls for discovering new non-halo based systems that are compatible with Mg metal (Fig.1.a).  Recently, motivated by the thermal stability and a presumed robustness of the BH4- anion against electrochemical reduction, we proposed magnesium borohydride as an electrolyte beyond state of the art for rechargeable magnesium batteries [2].  Owing to a high reductive stability, we discovered that magnesium borohydride could withstand the reducing environment of Mg metal making it the first and so far only example of an inorganic, relatively ionic and halide free salt that could function as an electrolyte in Mg batteries. This breakthrough offered a path towards designing non-corrosive electrolytes and has been used as a basis to create a whole new family of highly performing systems, Fig.1.a [3].  For example, to increase the anodic stability of the B-H bond while preserving the attractive features of BH4- anion, icosahedral boron clusters were proposed.  Unlike the case in typical halo Mg reagents, which require the addition of a Lewis acid as AlCl3 to increase its anodic stability, we developed the Mg salt Mg(1,7-C2B10H11)Cl [3,4] that while displaying greater than 98% Mg deposition/stripping efficiency, demonstrates high anodic stability (3.2 V) and solubility (> 1M in tetrahydrofuran solvent) (Fig.1b).

Herein, we will explain our bottom up design strategies, discuss fundamental properties obtained from systematic spectroscopic and electrochemical studies and share up-to-date results related to these new promising systems. 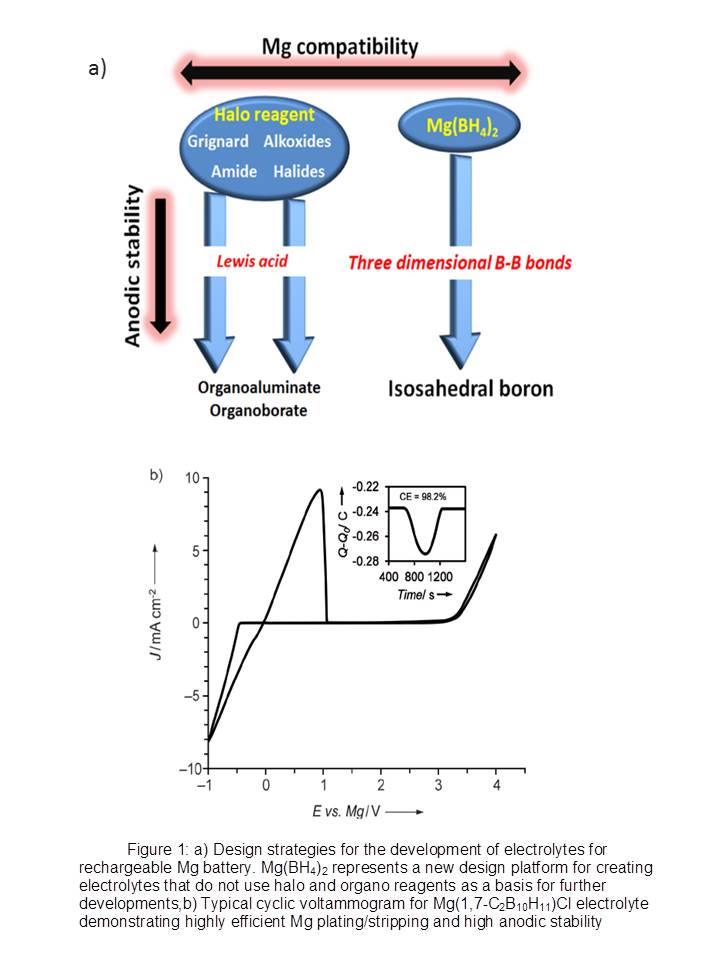