Salon A-1 (Hilton Chicago)
K. G. Gallagher, S. R. Gowda, A. N. Jansen, and D. W. Dees (Argonne National Laboratory)
Lithium- and manganese-rich layered transition-metal oxide (LMR-NMC) intercalation electrodes are projected to enable batteries with high energy density and low costs for energy. However, implementation of LMR-NMC materials are challenged by life limiting mechanisms as well as less than desired rate performance. Here-in, we use electrochemical characterization of LMR-NMC electrodes to examine the large magnitude of impedance and the asymmetric polarization between charge and discharge at low states of charge (SOC).

The lithium metal oxide cathode materials examined were LMR-NMC and standard NMC both from Toda Kogyo (Japan). The LMR-NMC material, referred to as HE5050, had the composition 0.5Li2MnO3•0.5LiMn0.375Ni0.375Co0.25O2 (or in layered notation Li1.2Ni0.15Mn0.55Co0.10O2). The NMC material had composition of Li1+x(Ni1/3Mn1/3Co1/3)1-xO2 and can be considered to be the commercial standard stoichiometry for Li-ion transportation cells at the time of this publication. Full cells used A12 graphite (Conoco Phillips) and half cells used lithium metal (FMC Lithium) both with standard LiPF6based carbonate electrolyte. A three electrode pouch cell was utilized for the asymmetry polarization experiments in the study, with a composite LMR-NMC electrode as the working electrode, lithium metal was used as the reference and counter electrodes

The area-specific impedance (ASI) of LMR-NMC in Fig. 1 displays a similar dependency as standard layered lithium metal oxides when compared as a function of voltage rather than SOC. The increasing and asymmetric behavior of the polarization in LMR-NMC measured at low SOC is hypothesized to be the result of the differing lithium contents and lithium mobilities in the heterogeneous, nano-composite metal oxide material. Transport of lithium within LMR-NMC is suggested to be governed by the relatively facile nickel- and cobalt-rich domains even as this domain appears to reach full lithiation. As the majority of capacity at low SOC in LMR-NMC is associated with the lithium- and manganese-rich domains, the observed high impedance presents a significant hurdle to utilizing this capacity in moderate power-to-energy ratio applications. Much work is needed to clarify the transport and structural mechanism in LMR-NMC. Other studies have shown the structural transformation known as voltage fade is less severe with lower lithium content. However, lowering the lithium stoichiometry also tends to lower the specific energy of the material at beginning of life. Optimizing the stoichiometry of the lithium and manganese to achieve a maximum specific energy over life at relevant discharge rates is a potentially viable path forward. 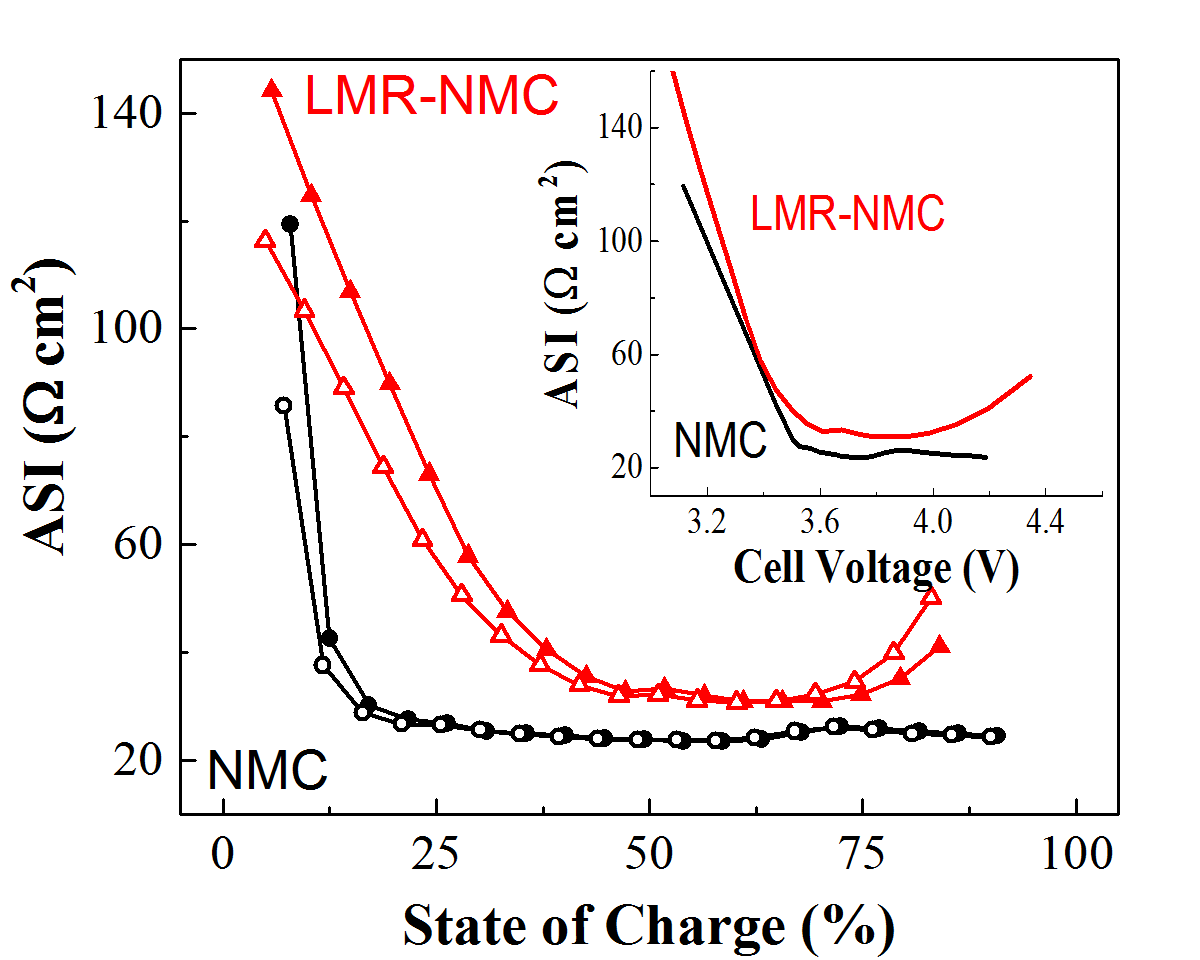