Salon A-5 (Hilton Chicago)
M. Aykol, S. Kim, S. J. Kirklin (Northwestern University), D. Morgan (University of Wisconsin - Madison), and C. Wolverton (Northwestern University)
A widely employed remedy to slow down the degradation of the electrochemical performances of lithium-ion batteries (LIBs) is to apply coating materials on cathode surfaces.[1] Such coatings can serve as physical barriers to inhibit electrode-electrolyte side reactions, and they can possess an additional functionality such as scavenging the detrimental acids (e.g., the hydrofluoric acid, HF) in electrolytes. Recently, we introduced a density functional theory (DFT) based framework to find promising HF-scavenging binary metal oxide coatings by considering their HF-scavenging tendencies and lithiation voltages.[2] Building on that framework, here we present a new high-throughput (HT) coating design strategy to search among thousands of candidate oxide materials and find the most promising candidates.

In the current framework, we consider three main thermodynamic criteria to assess the effectiveness of a compound AaBbCc…O1/2 as a coating. First criterion is the thermodynamic stability of the candidate material. We evaluate this criterion by finding whether the material is stable against decomposition to other phases in its chemical space A-B-C-…-O. The second criterion is the electrochemical stability. This criterion tests whether the material is stable against reduction and oxidation during cycling. The third criterion is the HF-scavenging tendency. We evaluate this criterion for systems where an HF-scavenging functionality is preferred, by identifying the HF-scavenging reactions and free energies. In addition, we take into account the effect of different cathode-electrolyte chemistries on these three criteria, namely, presence of common cathode materials (LiCoO2, LiMn2O4, etc.), as well as presence of HF-free or HF-bearing electrolytes.

Utilizing the HT-coating design framework described above, we screen more than ~100,000 oxide materials available in the Open Quantum Materials Database (OQMD)[3] to find coating materials with different target properties. We suggest promising multi-component oxide cathode coatings that can prolong the cycle-lives of LIBs, and surpass the effectiveness of common coatings used such as Al2O3, MgO and ZrO2.

This work has been supported by The Dow Chemical Company. 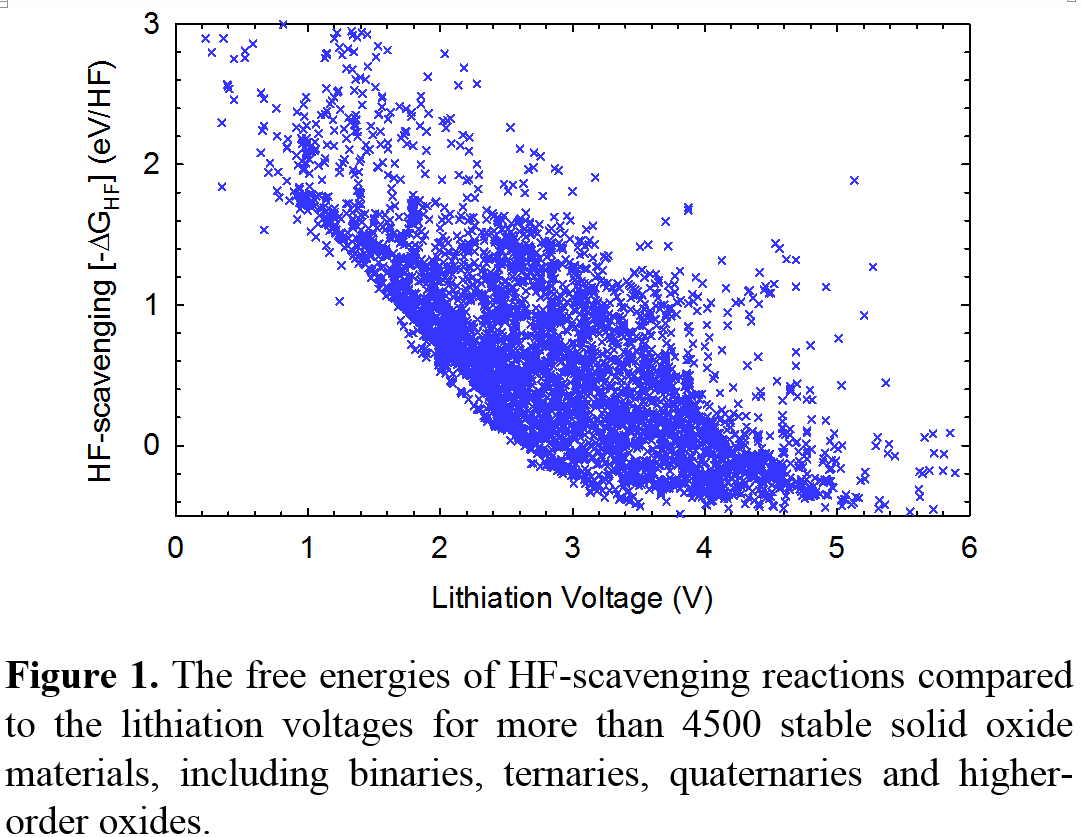