Large lithium-ion battery systems for stationary use have been extensively developed for the power supply of the demand control.  In such facilities, long-term operation is required.  The estimation of the cell performance over 10 years is necessary for introducing such systems to the actual power grid under actual operation.  Therefore, the prediction of the cell performance over 10 years becomes very important for the design of the systems.  In this study, we tried to predict of the long-term performance of commercially available lithium-ion cells by quantitative comparison of charge-discharge cycle test and storage test.

We selected 20 Ah class cells (Toshiba, SCiBTM) for the present study.  They are composed of Li(Ni,Mn,Co)O2-based cathode and spinel-type lithium titanate (LTO) anode packed in a metallic case.  It is widely known that no structural change occurs during lithium-ion insertion to or extraction from LTO, and the Li metal plating is suppressed in comparison with graphite anode due to the high potential of LTO1.  These characteristics are suitable for long-term operation.

Cells are operated in the packed module (2 parallel x 12 series) for the practical use, and their internal temperature becomes higher than the ambient temperature during operation.  We performed charge-discharge cycle test with keeping the single cells at 45°C to simulate actual operation condition.  The state of charge (SOC) in cycle tests was set between 10% and 90%.  The cells were galvanostatically operated, and cycled at rates of 0.5 C, 1 C, and 2 C.  Capacity tests were periodically carried out with full SOC range (between 0% and 100%) at a rate of 0.5 C at 25°C.  In order to investigate the long-term stability for storage without charge-discharge operations, we prepared other cells stored at 45°C also.  Their SOC were adjusted to 50% before the storage tests.  These capacities were also periodically checked at 25°C.

Figure 2 shows the discharge capacities of the cells stored at 45°C without the charge-discharge operation.  They became constant after the initial increase.

The discharge capacity that was changed due to only the cycle fading factor was denoted as Qe.  Figure 3 shows the variation of Qe with cycle number.  Qe decreases proportionally with cycle numbers at all rates.  The capacity change due to the charge-discharge operation is solely obtained by comparing the results of the charge-discharge cycle tests and the storage tests, and the obtained Qecan be used as a good measure to estimate the long-term stability of the cells.

Figure 1  The variations of the discharge capacities with cycle numbers examined at 25°C at a rate of 0.5 C after the charge-discharge cycle tests at 45°C.

Figure 3  The variations of the discharge capacities changed due to only the cycle fading factor with cycle numbers examined at 25°C at a rate of 0.5 C after the charge-discharge cycle tests at 45°C. 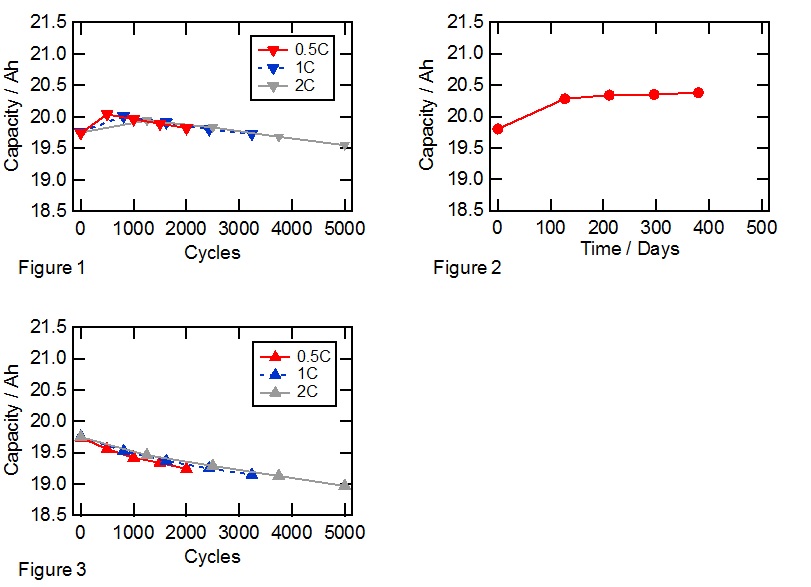