Salon A-4 (Hilton Chicago)
A. Warnecke (RWTH Aachen University, ISEA, Jülich Aachen Research Alliance, JARA-Energy) and D. U. Sauer (RWTH Aachen University, ISEA, Juelich Aachen Research Alliance, JARA-Energy, Germany)
Electric mobility is a growing sector and already nowadays one of the driving forces in the development of cheap, powerful, long lasting and safe lithium-ion batteries. Due to the variability of the lithium-ion technology not only one combination of cathodes and anodes is possible and used. A very promising combination for electric vehicles seems to be a graphitic anode together with lithium nickel manganese cobalt oxide cathodes (Li1(NixMnyCo1-x-y)O2 or NMC). The first composition on the market was the 1:1:1 NMC where the three transition metals have the same share [1]. These materials are known for a high energy and power density, also the lifetime performance shows feasible results for the electric vehicle application [2].

In this work a commercial lithium-ion cell was used to study the thermal behavior of the positive electrode from un-aged and aged cells in order to access the safety of the battery. The selected battery is a Sanyo UR18650E round cell with a capacity of 2050 mAh and consists of a graphitic anode and a NMC cathode (1:1:1). The exact composition of the cathode was gained by an ICP-OES measurement and confirmed the 1:1:1 composition (Ni 32%; Mn 32%; Co 36%). Details of the ageing process and resulting ageing behavior can be found in an earlier publication [2]. The thermal behavior of the positive electrodes is studied with a TGA-DSC and the full cell was studied with an accelerated rate calorimeter (ARC). Due to the delamination of the anode after ageing this electrode could not be used for further investigations.

When a lithium-ion battery ages the anode consumes lithium and electrolyte by additional forming of solid electrolyte interface (SEI) [3]. The consumed lithium is delivered by the cathode which changes the cells balancing over time and leads to an overcharge of the cathode due to a shift of the voltage window. This was shown by Krüger et al. [4] with reference electrode measurements at NMC vs. graphite batteries.

To study the thermal behavior and measure the onset temperature for the thermal runaway of the cathodes TGA-DSC measurements have been performed. The sample preparation started with the opening of selected cells under argon atmosphere. Cathode samples with a 16 mm diameter were harvested to build coin cells. These cells were used to adjust of SoC in the cathode material. The coin cells were afterwards opened again in a glove box and samples with a diameter of 4mm were taken for the thermal characterization. This is done by heating up the samples with a Mettler-Toledo TGA-DSC under nitrogen atmosphere with a heating rate of 10 K/min from room temperature (25 °C) to 400 °C. The results of the cathode from a new cell at four voltages can be seen in figure 1.

The thermal behavior of the un-aged and the aged cell at 4.8 V is compared in figure 2. The aged cell was cycled symmetrically with 1C at 35°C between 100 % and 90 % SoC and had a remaining capacity of 52.6 %. The sample from the un-aged cell shows a less exothermic behavior and also the temperature of the thermal runaway is significantly lower. To study the influence on the full cell, also the thermal behavior of aged and new cells were tested. 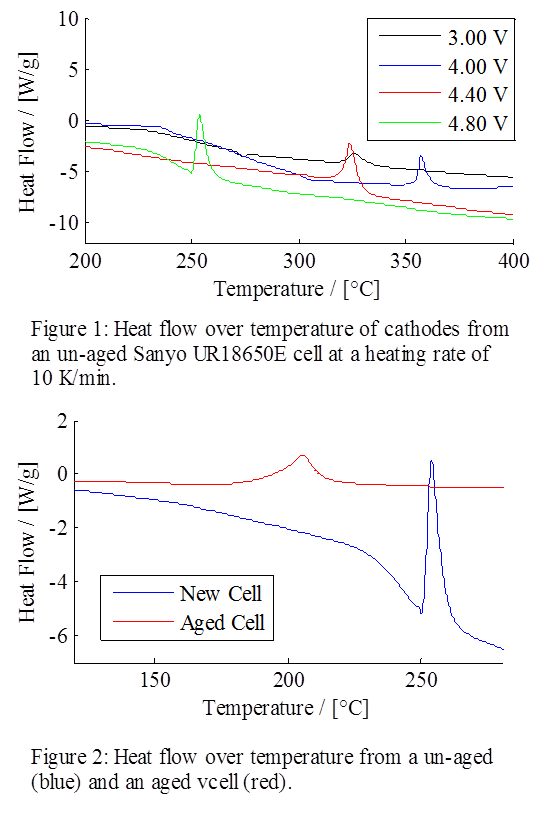