Williford Room B (Hilton Chicago)
J. Ghosh, D. Osintsev, V. Sverdlov, and S. Selberherr (Institute for Microelectronics, TU Wien)
The massive improvement of computational power of integrated circuits is supported by the continuous miniaturization of semiconductor devices' feature size. With scaling of the semiconductor devices apparently approaching its fundamental limits, new engineering solutions and innovations are required to further improve the performance of microelectronic components. Electron spin is promising for future nanoelectronic devices. Silicon is the main material of microelectronics, which possesses several properties attractive for spintronics: nuclei with predominantly zero spin and weak spin-orbit interaction. A long spin transfer distance of conduction electrons has already been shown experimentally [1]. As of the ongoing shift to FinFET/UTB SOI based devices from the 22nm to the 14nm node and beyond, enhancement of spin lifetime in such structures is a dominant issue under inspection.

For the theoretical analysis of the spin lifetime we consider the effective 4x4 k.p Hamiltonian model, with the spin degree of freedom included, written at the vicinity of the X-point for the two relevant valleys [2] along the perpendicular axis in the Brillouin zone. This method accurately describes the electron wave functions in the presence of strain and spin-orbit interaction. The spin lifetime is determined by the spin-flip scattering between the valleys located on different crystallographic axes [2]. A large spin relaxation in gated silicon structures was observed [3], and a several orders of magnitude enhancement of the spin lifetime in (001) silicon films subjected to [110] uniaxial tensile stress was predicted [4], when spin is injected perpendicular to the film. Here we demonstrate that the spin relaxation rate can be further reduced and thus the spin lifetime will increase for spin injected in-plane.

We begin with the subband four-component wave functions for two valleys and two spin projections. The up(down)-spin wave function consists of majority and minority components [5], and the absolute values depend on the shear strain εxy. When a fixed εxy and in-plane momentum (px ,py) is maintained, we find that the absolute value of the majority (minority) component reduces (increases), when the spin injection direction is changed from perpendicular to in-plane. The surface roughness (SR) matrix scattering elements at opposite interfaces are assumed independent and proportional to the product of the corresponding subband wave functions' derivative at the interfaces [6]. For a film of thickness t = 1.36nm, where SR spin scattering is the prominent mechanism over the others, we notice that the intersubband relaxation matrix elements are reduced for an in-plane spin injection in OX-direction compared to the spin injection in perpendicular OZ-direction. As a consequence, the spin relaxation rate is reduced and the corresponding spin lifetime is increased once spin is injected in-plane over a large range of εxy, ref: Fig. 1. The figure also shows that both of the inter- and intra-valley components of the spin relaxation time (τ) increase for in-plane spin injection. It is further observed that the momentum relaxation time stays nearly unaltered irrespective of the spin injection direction.

In order to explain this behavior, we look at the spin relaxation hot spot [3] conditions as given by the equation: Dεxy–pxpy/M = 0, where D = 14eV is the shear deformation potential, M-1 ≈ mt-1-m0-1 (mt: electron transversal effective mass, m0: electron rest mass). We consider the presence of the properly included spin-orbit field (SOF) which acts along (px,-py) direction. Spin precesses in the presence of SOF differently for spin injected in OX- or OZ-direction. For an in-plane injection along OX-direction, the spin projection expectation values at the hot spots can be written as: σX = sin2(arctan px/py), σY = -(py/px) σX, and σZ = 0. On the contrary for spin injected perpendicular to the film (OZ-direction), σX = σY = σZ = σ = 0 at the spin hot spots, resulting in maximal spin randomization at any in-plane momentum (px, py). Therefore, our results show that the spin relaxation rate will be strongest, when injected perpendicularly, which confirms that the spin relaxation time will increase for an in-plane spin injection.

This work is supported by the European Research Council through the grant #247056 MOSILSPIN. 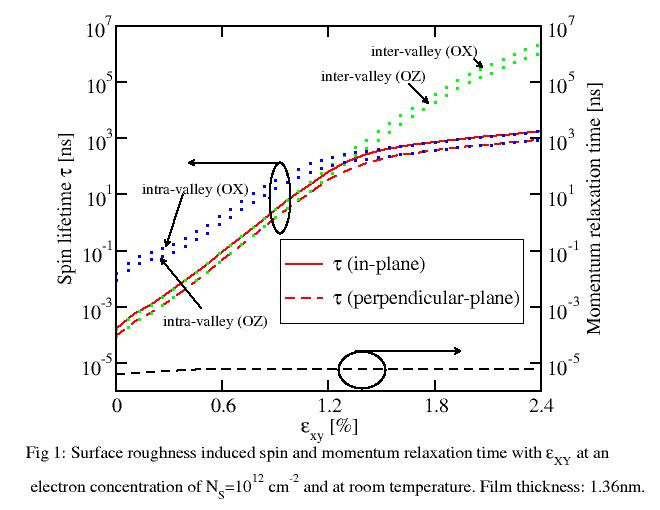