1067
On the Mechanism of Corrosion in Presence of Organic Acids

PDR 2 (Hilton Chicago)
A. Kahyarian (Institute for Corrosion and Multiphase Flow Technology) and S. Nesic (Institute for Corrosion and Multiphase Flow Technology, Ohio University)
Theories on the role of organic acids in general, and acetic acid in particular, in carbon steel corrosion were initiated in 1940s with the reports on the significant effect of acetic acid in pipeline corrosion in oil and gas industry1.  It was reported that even small amounts of acetic acid (300 ppm) can cause severe corrosion of pipeline steel1. Later on, several studies on the concentration of organic acids in formation water of oil and gas wells have been reported up to 3000 ppm of acetic acid1–4. Despite numerous studies on the mechanism of acetic acid corrosion of pipeline steel, details of the mechanism are still debated.

Acetic acid is known as a week acid which is partially dissociate in water. It is also known that weak acids act as a reservoir for hydrogen ions in the corrosion process. This phenomenon known as “buffering effect”, describes the enhanced limiting current in presence of acetic acid compared to the case of strong acids at a similar pH. Additionally, it is suggested that the undissociated acetic acid is also a proton donor and is able to be reduced at the surface of the steel, which is known as “direct reduction” mechanism.

The direct reduction mechanism has been used for years5,6. Also, many other studies on the combined effect of acetic acid and carbon dioxide on carbon steel have adopted the same mechanism7–9. However, recent studies suggest that undissociated acetic acid is only involved in the corrosion process as a buffer for hydrogen ions. Tran et al.10 report a series of polarization curves on SS304 stainless steel, showing that the concentration of acetic acid does not affect the charge transfer portion of the cathodic sweeps. Therefore, they have concluded that acetic acid is not involved in charge transfer processes directly and that the buffering effect is the main mechanism. In that study, authors suggest that the same mechanism is valid for carbon steel.

In the present study an iron electrode was used instead of carbon steel in order to minimize the effect of impurities such as carbon. Figure 1 presents the experimental data collected in the present work and the comparison with the results of the mathematical simulations. The experimental data are collected using a rotating disk electrode made from pure iron exposed in a two liter, three electrode glass cell in deoxygenated aqueous solution. The mathematical simulation is the solution of Nernst Plank equation for an acetic acid aqueous system. These equations are solved with finite difference method, using Newman’s BANDJ11 algorithm in FORTRAN with a MATLAB user interface.

Figure 1 shows a clear linear cathodic charge transfer behavior at both pH values. Additionally the charge transfer part of the cathodic reactions is insensitive to changes in concentration of acetic acid which is the indication that free acetic acid in the system is not directly reduced at the surface of iron. Current results confirm that the proposed mechanism by Tran et al. applies to pure iron which has great similarity to pipeline steel.

The mathematical calculations proposed here also support the same conclusion. Additionally, comparison of the calculated charge transfer rates based on these results suggests that the rate of dissolution of iron is slightly retarded in presence of acetic acid. 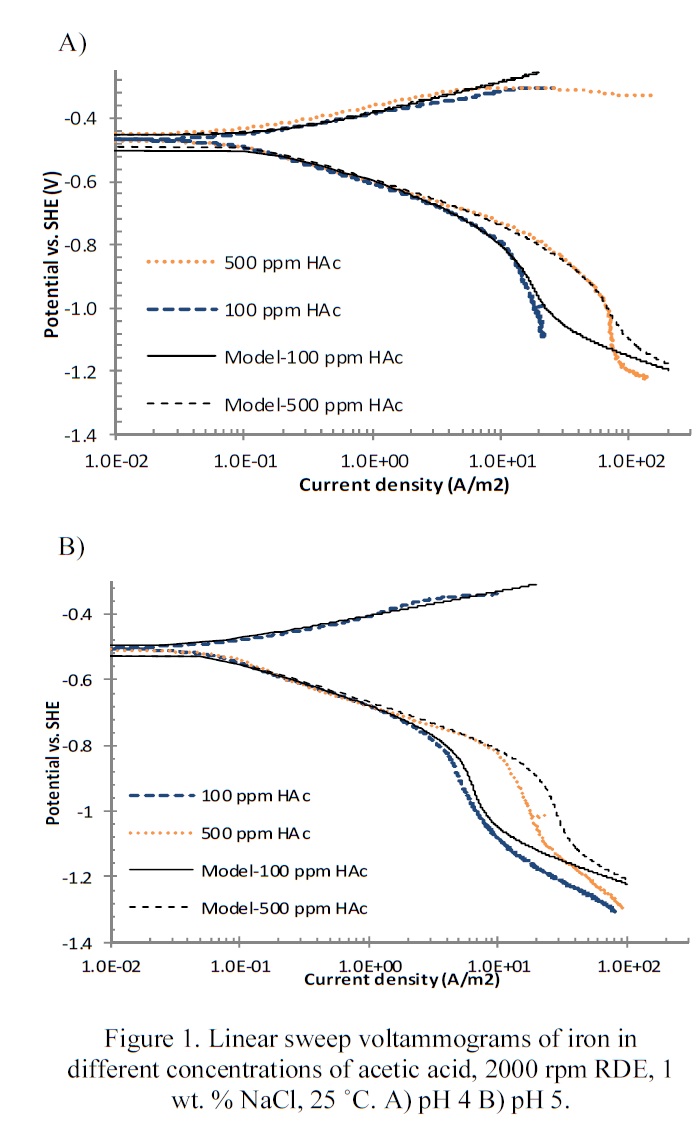