Salon A-1 (Hilton Chicago)
M. Bettge, Y. Li, and D. P. Abraham (Argonne National Laboratory)
It is commonly accepted that rapid charging shortens the cycle life of full cells much more than rapid discharging when equal magnitudes of cell current are applied. The reason for this behavior is the low operating voltage of the graphite anode once it is partially lithiated during charging. Polarization below the redox voltage of Li metal triggers Li plating on the anode surface; the Li deposits then react with the electrolyte irreversibly leading to capacity loss and impedance rise. The goal of this presentation is to show how high charge and discharge currents affect the cycle life of Li-ion full cells that contain a Li- and Mn-rich transition metal oxide (LMR-NMC) [1].

Asymmetric cycle life ageing using different charge and discharge currents is the key experimental procedure: all cells were subjected asymmetrically to a low charge and a high discharge current - or vice versa. The low current corresponds to approximately a C/14 rate for a symmetrically cycled cell. Three different current levels were chosen for the corresponding rapid charge or discharge, corresponding to a rate of C/3, 1C, and 3C. All tests were conducted in 2032-sized coin cells (1.6 cm2 area electrodes) at 30°C. The positive electrodes contained Li1.2Mn0.55Ni0.15Co0.1O2, and the negative electrodes contained graphite as the active component. Data on full cells containing Li4Ti5O12 (LTO)-based negative electrodes were also obtained during our study.

Figures 1A and 1B show the asymmetric cycle-life performance of six different tests: rapid charging and rapid discharging, each with three different current levels during the high current half-cycles. After every eight rapid cycles, two low current cycles are implemented to track the mobile Li inventory of the cells. Significant differences between the three current levels are seen for the fast discharge tests (bottom), while relatively small differences are seen for the fast charge tests (top). Regardless of fast charging or discharging, the low current capacity decreases continuously, almost linearly, as all cells continue to age – indicating a continuous loss of mobile Li in the cells, which is believed to result from Li trapping in the negative electrode SEI. The decrease in discharge capacity with increasing current is related to the slow Li-intercalation kinetics and the hysteretic behavior intrinsic to the LMR-NMC. The abrupt drop in the high-current capacity that is encountered during fast discharging after ~30 cycles is due to a significant increase in cell impedance, and not due to excessive Li trapping, as the low current capacity is nearly identical for the two cases.

In summary, the findings show that, contrary to common belief, the effect of rapid discharging on the cycle life can be more detrimental than that of rapid charging for some cycling conditions and cell chemistries, such as the ones described in this study. 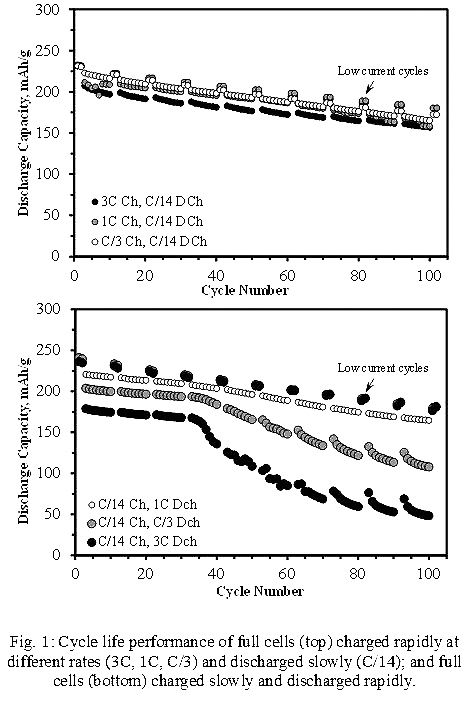