1199
Electrodeposition of PbO2 on Reticulated Vitreous Carbon for Organic Electrooxidation

PDR 3 (Hilton Chicago)
L. A. M. Ruotolo (Federal University of Sao Carlos, Department of Chemical Engineering) and R. M. Farinos (Federal University of Sao Carlos)
The problems caused by the growing of the environmental contamination by organics have been calling the attention of researches, authorities, and population in general since their effects have been more present in our lives. Environmental contamination can be avoided by using, in most cases, biological treatments; however, some classes of compounds are refractory to this kind of treatment and require different technologies to oxidize the organic compound.

The RVC/PbO2 electrode was prepared in a flow electrochemical reactor. The PbO2 film was electrodeposited on RVC applying different charges by varying the current density and electrolysis time. The porosities (in pores per inch) of the RVC substrates were 45, 60, and 80 ppi. The electrode was characterized by electrochemical techniques and scanning electronic microscopy. The decolorization reaction of the reactive blue 19 dye was used to evaluate the electrocatalytic power of the RVC/PbO2and compared to the flat plate electrode.

The results for the 45 ppi RVC showed that the PbO2electrodeposition was not uniform within RVC due to non-uniform current penetration (Fig. 1 and 2). The best electrodeposit morphology and uniformity was obtained applying low current densities for longer electrolysis time (Fig 1c).  Contrary, fast decolorization rate was obtained using the films deposited applying high current density (Fig. 2).

A comparison between the flat plate and RVC/PbO2electrodes in Fig. 3 shows that the three-dimensional electrode was very effect to remove color.

In order to increase the electrode specific surface area, PbO2 films were electrodeposited on RVC with 60 ppi and 80 ppi. After current density optimization, the PbO2 film was successfully deposited on the 60 ppi RVC.  On the other hand, an optimum current density cannot be found in order to obtain a uniform deposit on the 80 ppi RVC.  Moreover, the low porosity of this electrode and the high hydrophobic nature of RVC led to low surface wettability, thus contributing for the uneven PbO2 film. 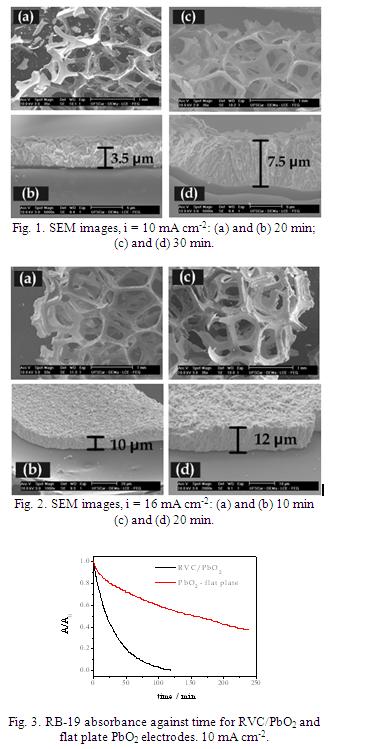