Salon A-5 (Hilton Chicago)
E. Talaie, V. Duffort, and L. F. Nazar (University of Waterloo)
Layered sodium transition metal oxides have attracted a great deal of attention for research and development for Na battery applications in past few years because of their suitable energy densities and cost-effectiveness [1]. P2-Na2/3Mn1/2Fe1/2O2 is one of the most promising materials studied so far [2] composed of abundant and non-toxic elements, and delivers a high specific capacity of over 190 mAh g-1 with moderate capacity retention.

Regarding structural stability, the Na2/3Mn1/2Fe1/2O2/Na cell demonstrates a smooth charge/discharge profile, except for a voltage plateau at around 4V. A P2-OP4 phase transition at the high voltage region has been reported, although the new phase was not structurally characterized [2], and a P2-P'2 phase transition at the low voltage region was very recently reported for this material [3].

As a drawback of sodium transition metal oxides, these materials are generally known to be sensitive to atmospheric conditions. Formation of surface sodium carbonate was reported for an O3 composition [4]. Some P2 phases are reported to accommodate water molecules in the interlayer space [5], and others are reported to oxidize forming cationic vacancies [6].

Reactivity of Na2/3Mn1/2Fe1/2O2 has not been addressed so far leading to discrepancies in published results. We will describe the air sensitivity of Na2/3Mn1/2Fe1/2O2 and its influence on its electrochemical properties. The effect of cation substitution on the evolution of the crystal structure, the electrochemical performance and enhancement of atmospheric stability will be discussed as well.

In this study, pristine and cation substituted Na2/3[Mn1/2Fe1/2]O2 samples were synthesized by solid state methods. The uptake/evolution of gases by P2-Na2/3[Mn1/2Fe1/2]O2 were studied by thermaogravimetric analysis (TGA) coupled with mass spectroscopy (MS). Structural characterization was carried out by in-situ x-ray and ex-situ neutron powder diffraction.

A procedure to reproducibly obtain material free from air contamination was developed. The effect of the air sensitivity on the electrochemical properties was studied using sodium half cells. Composite electrodes were prepared by mixing the active material with carbon black and PVDF (80:10:10) for both air exposed and protected samples and cycling these cathodes with an electrolyte comprised of 1M NaClO4 in PC with 2 vol. % 4-fluoro-1,3-dioxolan-2-one (FEC).

Our TGA and MS studies along with neutron diffraction analysis of air-exposed samples (Figure 1), shows that the aging mechanism of the P2-Na2/3Mn1/2Fe1/2O2 in air is more complex than the simple intercalation of water molecules. We propose an original oxidation mechanism not reported to date, for any of the layered sodium oxides, to the best of our knowledge.

This oxidation mechanism explains the different voltage profiles of air exposed/protected Na2/3Mn1/2Fe1/2O2. Figure 2 shows the two first cycles of “air-protected” vs. “air-exposed” pristine and cation substituted P2-Na2/3Mn1/2Fe1/2O2, clearly demonstrating the effect of exposure of the material to air on the electrochemical properties. The effect of cation substitution on the air-sensitivity of P2-Na2/3Mn1/2Fe1/2O2 and also its structural evolution during (de)intercalation of sodium ions will be discussed in this presentation.

This research was supported by the Natural Sciences and Engineering Council of Canada through their Discovery and Canada Research Chair programs. 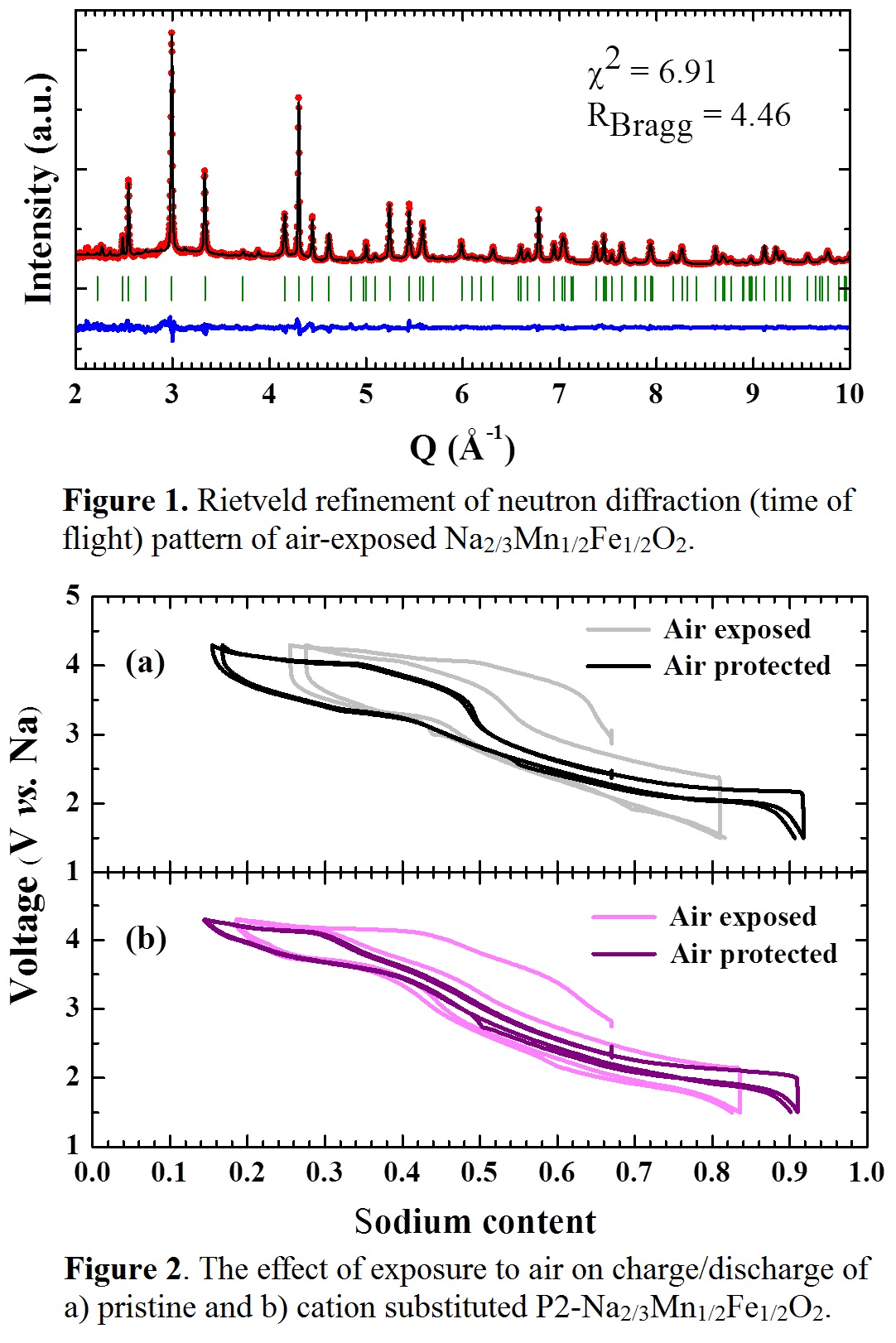