Li-O2 batteries have one of the highest theoretical specific energy of 3,458 Wh/kg when the weight of the primary discharge product, i.e., Li2O2, is considered. Thus, this BIL (Beyond Lithium Ion) battery technology, if made practical, will find extensive usage especially in the successful electrification of vehicles. However, there are many challenges.1 Current Li-O2 batteries demonstrated in labs have been limited to “open systems”, i.e., batteries that have a porous carbon cathode that “breathes” pure oxygen. One limitation of these systems is the requirement of pure oxygen. In addition, the consensus among researchers on specific capacity (mAh/g) calculations based on active materials is lacking because extra oxygen is continuously supplied to cells upon cycling. One solution to these limitations is the use of closed systems, i.e., storage and reuse of O2 within the cell.

The most reversible discharge product in Li-O2 batteries has been identified to be Li2O2.2 Herein, we report some preliminary results on a closed, but rechargeable system starting with a Li2O2 cathode that has shown high specific discharge capacity close to theoretical figures of Li2O2. A novel Li2O2-carbon composite cathode has been developed that can not only support the cathodic reaction of Li2O2 but also store O2 in the charge.

The Li2O2 cathode was made of a composite of Li2O2 and carbon, as shown in Fig. 1. 1 M LiCF3SO3 in 1,2-dimethoxyethane was used as electrolyte. Coin cells without open windows were used in the battery testing. Cells were assembled in an Argon-filled glove box and tested outside of the glove box. The specific capacities and C rates were calculated based on the mass of Li2O2 in the cathode.

As shown in Fig. 1, the carbon acts as a current collector that can form an electron conduction pathway into Li2O2 powder during the charging process. It also acts as O2 absorption medium to hold the O2 gas evolved during charging until the discharge process begins. In addition, the nanoscaled composite can permit fast transfer of Li+ ions.

The voltage profiles corresponding to different C-rates for the first cycle in the closed system cell is shown in Fig. 2. The cell was initially charged and shows principle charge plateau at 3.8-4.0 V. The cell is then discharged and shows a consistent discharge at ~2.75 V for both C/10 and C/5. The discharge occurs at 2.4-2.5V for C/2. These voltages are in good agreement to voltages at similar current densities in open system cells reported by other groups.3 The specific charge capacity at all three rates approach the theoretical capacity of 1,168 mAh/g for lithium peroxide, meaning almost all Li2O2 can be converted to gaseous O2 in the first charge. The specific discharge capacities are ~1,000 mAh/g at low rates thus giving a round trip Coulombic efficiency of 85%. At C/2 rate, the discharge capacity is slightly lower than those at higher rates. These results demonstrate the composite electrode can facilitate almost complete conversion of Li2O2 in the charge and hold gaseous O2, most of which can be reduced in the following discharge.

The cycling capability is shown in Fig. 2. It can be seen that the first cycle shows 85% efficiency. The subsequent cycles have a lower charge voltage which could be due to smaller Li2O2 particles after first discharge. Later cycles show capacity fade. This can be attributed to the decomposition of electroyte and loss of O2 produced in the charge.4 When capacity limited charging (50% depth of charge) to a lower cutoff voltage is applied, exceptional rechargability can be obtained which is shown in Fig. 3. It is believed the improvement is due to delayed electrolyte decomposition.

In summary, a closed and rechargeable lithium battery with Li2O2 cathode has been demonstrated for the first time. This platform is unique as it shows, for the first time in literature, capacites and rate capability based on mass of Li2O2. It allows other studies on the stability of electrolyte, electrode kinetics, and oxygen storage materials. This system can eleminate the issues of open systems such as impurities oxygen gas and evaporation of electrolyte. Unstable electrolytes are a major bottleneck in Li-O2 batteries. Such a system provides a suitable medium to optimize electrolytes and other cell components. 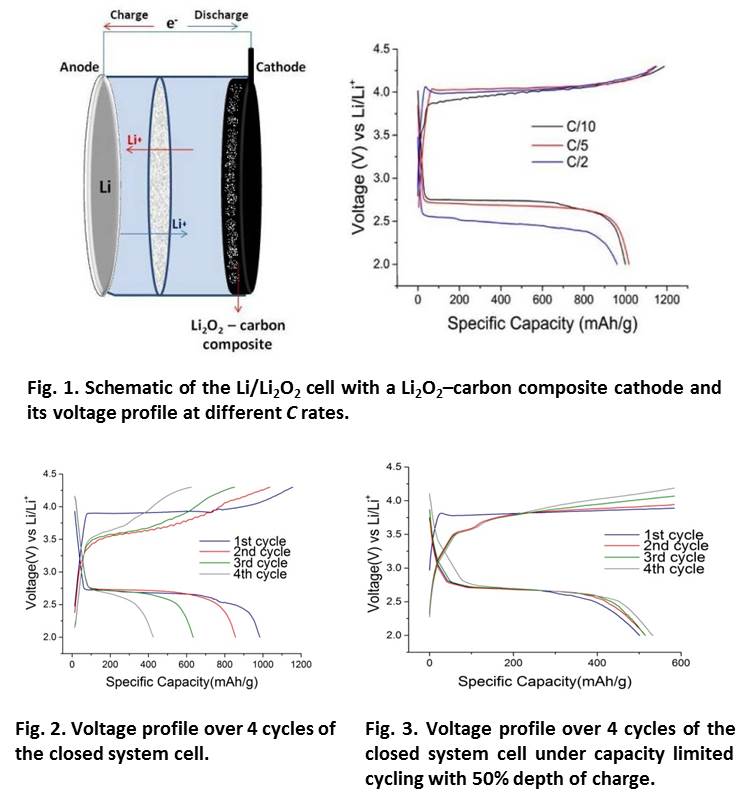