Yamaki et. al, were the first to investigate the use of metal phthalocyanines as potential high energy density cathode active materials [1]. However, these investigators did not overcome the issues of gas generation due to the use of propylene carbonate and limited cycle life [2,3]. Since then, work has proceeded on the development of a high energy density primary battery using iron phthalocyanine (FePc) in organic electrolytes without propylene carbonate and ab-initio calculations on the intercalation of many equivalents of lithium into FePc. [4,5]

Chen et. al, in their recent patent application, have proposed to overcome the problems seen by Yamaki by encapsulating the phthalocyanine active material and by the use of nano-sized particles and graphene to further enhance performance [6]. During our initial investigations using similar techniques, coin-cells were made with cathodes that contained carbon-coated nano-sized iron phthalocyanine (C-FePc) and carbon nano-tubes (CNT), lithium metal foil as the anode and an organic electrolyte.

Nano-sized FePc particles were prepared by placing FePc powder, from Aldrich, into a SPEX SamplePrep model 8003 alumina grinding vial with an ½” diameter alumina grinding ball. The jar was then placed inside a SPEX SamplePrep 8000M Mixer/Mill for 200 minutes.  A TEM was then used to verify the size of the particles as approximately 25-50 nm; significantly smaller than the 1-2 um size when originally purchased.

The nano-sized FePc particles were then encapsulated with carbon.  This was done by mixing the nano-sized FePc and malic acid in a 1:2 wt% ratio in a Pyrex vial and then adding a small amount of toluene to create a slurry.  A magnetic stir bar was then placed in the mixture and the slurry was stirred for 2 hours on a stir plate.  The vial was then placed inside a vacuum oven, heated to 180 °C, and dried overnight under vacuum and at temperature to form the carbon coated FePc particles.

The CNT particles were prepared by an AFRL in-house procedure to be disclosed in the full paper.

Shown in Figure 1 are the first nine discharge cycles of a coin cell using lithium metal as the anode and C-FePc as the cathode active material. The discharge cycles were limited to 20 equivalents of lithium per C-FePc molecule or 943 mAh/g of C-FePc. Note that the theoretical capacity of lithium/sulfur forming Li2S and lithium/oxygen forming Li2O2 are about 1165 mAh/g of cathode product and we are cycling near this coulomb capacity limit. The first discharge has a very long discharge plateau at around 1.9 volts. The second discharge has a longer initial sloping voltage and this time is subsequently reduced with cycling. Further work is proceeding to investigate the nature of this voltage change. Also, different types of metal phthalocyanines and coatings are also being investigated to optimize the performance of this class of high energy density phthalocyanine-based cathode active materials.

Initial investigations into the reversibility and cycle life of lithium-based cells using carbon-coated nano-sized iron phthalocyanines as the active material are promising. Cells cycling at near 1000 mAh/g cathode active material have been achieved. Improvements in capacity, rate, and cycleability are being pursued. 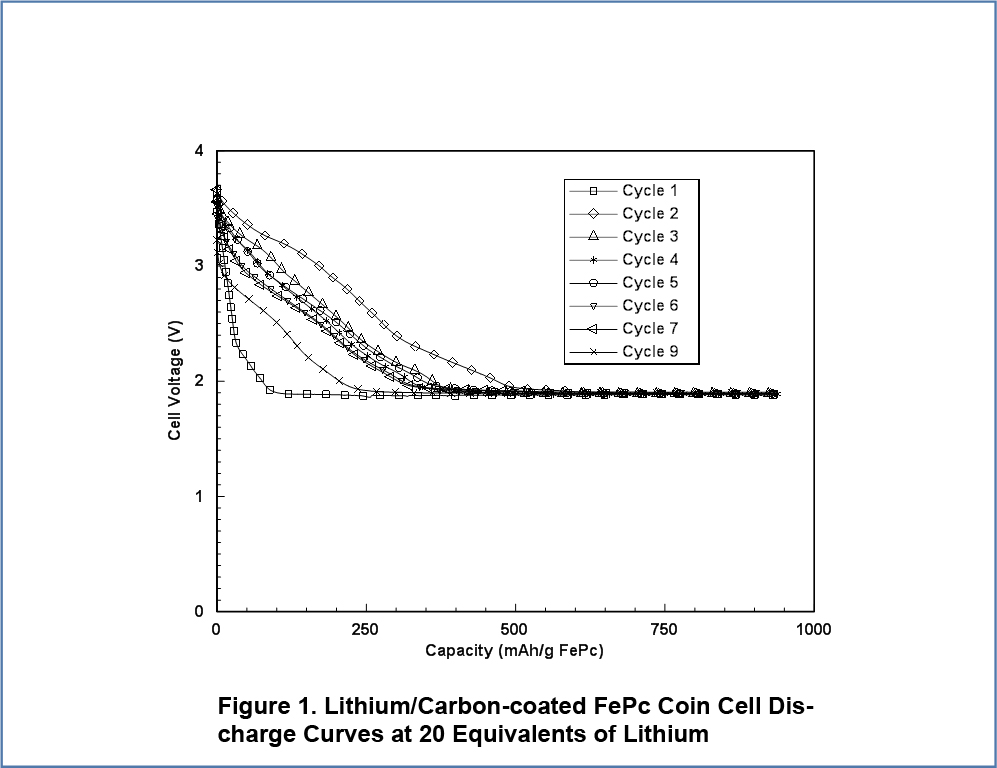