2172
A Pre-Concentrator for Explosive Vapor Detection

In recent years, the use of improvised explosive devices (IEDs) have become the preferred vehicle for terrorist attacks since they can be easily fabricated from readily available materials. This has raised concerns for the travelling public and prompted the need for a cost-effective, continuous monitoring system for explosives detection [1].

Recent works have been published regarding sensors and their ability to detect trace level explosives. Although these sensors address some of the needs for DHS, there is a limit to the modifications that can be made to these sensors in order to decrease the limit of detection. In this work, a pre-concentrator was developed as a means to increase the sensitivity of sensors used to detect vapor-phase explosives. Pre-concentrators employ sorbents that possess critical adsorption/desorption properties, thus allowing the delivery of a highly concentrated pulse of explosive vapor to the sensor. An order of magnitude improvement in detection limit was demonstrated for 2, 6-DNT and our pre-concentration approach shows considerable promise for the detection of other explosives at trace levels.

Figure 2 illustrates the difference in signals after the thermal desorption of explosive molecules from the polymer. The response (signal) due to the pre-concentrator was nearly double that of the sensor alone. The results suggest an increase in power, signifying that an endothermic reaction occurs between the analyte and the catalyst. Figure 3 shows the detection limit obtained using the dual sensor (dynamically controlled) platform for TATP, which provides the baseline for comparison purposes; i.e. enhanced response due to pre-concentration. Further experiments were conducted to determine a gas flow that optimizes signal response, collection time and polymer film thickness and their role in the adsorption/desorption kinetics.

We have demonstrated that the addition of a polystyrene pre-concentrator to our sensor platform lowered the detection limit of 2, 6-DNT by an order of magnitude. Upon thermal desorption, there was an approximate 47% increase in sensor response. Future work will focus on developing other polymer pre-concentrators that will decrease the detection limit of other vapor phase explosives of interest. 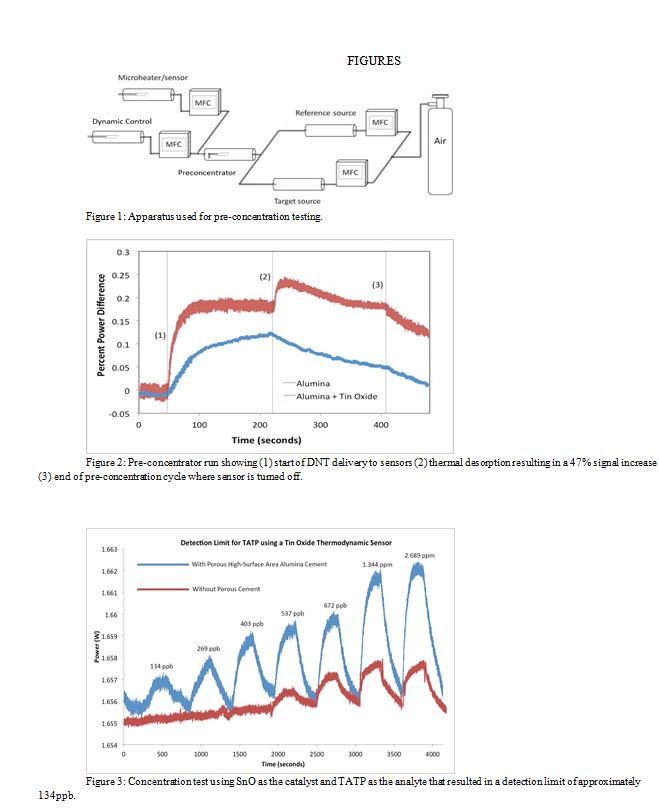