The high capacity cathode material xLi2MnO3∙(1-x)LiMO2 (where M=Ni, Co and/or Mn) is a promising candidate for lithium-ion batteries (LIBs). However, the kinetics are limited by the Li2MnO3 component,1 there is capacity loss during cycling, and the material undergoes voltage fade. Furthermore, it is generally agreed that oxygen vacancies are being introduced into the Li2MnO3 component during the initial charging cycle above 4.4 V.2 However, the amount and location of these vacancies are not yet understood and difficult to quantify using experimental techniques. These oxygen vacancies alter the structure on an atomic scale and therefore will significantly impact the capacity, structural evolution and lithium diffusion within the material. Atomistic computational techniques provided a unique tool to introduce oxygen vacancies at various concentrations. Therefore, this study focuses on using atomistic computation to analyze the impact of oxygen vacancies on the properties of the Li2MnO3-δ component such as diffusion of lithium and capacity.

Density functional theory (DFT) calculations with GGA+U approximations were performed on a 2x1x2 cell of Li2-xMnO3-δ with x incrementing by 0.125 from 0 to 0.500 from starting systems with different oxygen vacancy concentrations (δ=0, 0.125, 0.250). Preliminary calculations on a smaller cell showed that the lithium vacancies tend to form near the oxygen vacancies. Therefore, the configurations with lithium vacancies (VLi­) in all positions within an average of about 4 Å from the oxygen vacancies (VO), and a couple of VLi a larger distance from VO for comparison, were sampled.

Ab-initio molecular dynamics simulations (AIMD) were on a 2x1x2 cell with the Nosé thermostat at a temperature of 1500 K so that diffusion could be observed on the computed time scale of 50 ps without the crystal melting. The AIMD simulations were performed starting from the structures with the minimal energy determined by the above DFT calculations. Three concentrations were investigated: (x=0.125, δ=0), (x=0.125, δ=0.125), and (x=0.250, δ=0.125).

The DFT calculations showed that the VLi prefer to form in the neighboring sites next to the VO with the energy of formation of the VLi increasing with increasing distance from the VO. The open circuit voltage was also calculated from the minimal energy structures, Figure 1, which showed that the oxygen vacancies caused an increase in capacity at voltages around and below 4.0V (the approximate maximum voltage used to avoid electrolyte oxidation reactions3).

The AIMD simulation of the system with only VLi  but no VO (x=0.125, δ=0) showed significant movement of the lithium vacancy hopping within the lithium layer. The system with x=0.125 and δ=0.125 showed little diffusion as the lithium vacancy stayed in that optimal configuration next to the VO. The only movement observed within 50ps is  the VLi hopping to a neighboring site and then hopping back after 5 ps.  The last simulation contained (x=0.250, δ=0.125). Both VLi were in sites neighboring the VO, one in the transition metal layer and the other in the lithium layer at the same optimal site as the first VLi . The VLi in the lithium layer stayed in place during the 50ps, only hopping to a neighboring position and back briefly twice. In contrast, the VLi in the transition metal layer first moved to another lithium layer via a trans-layer hopping and then diffused tremendously within that layer.

These DFT and AIMD results showed that there is a strong correlation between VLi ­and V­­O. Introducing VO into the Li2MnO3 structure increased the capacity by making the Li sites near the VO less energetically favorable but hindered Li diffusion because these sites were higher in energy, therefore less accessible for Li. 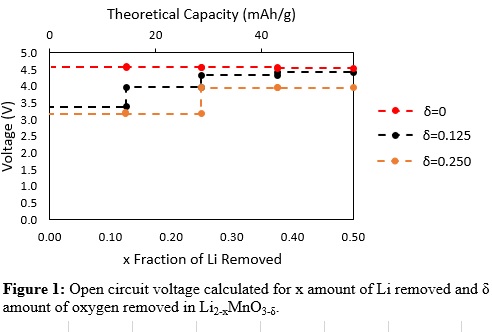