High energy density rechargeable batteries are greatly demanded owing to the increasing use of electric vehicles and portable electronics. Lithium-sulfur (Li-S) batteries, with a high theoretical speciﬁc capacity of sulfur (i.e., ∼1,672 mAh g-1), are considered to be one of the most promising substitutes to Li-ion batteries.1 Despite sulfur cathode material has many benefits (e.g., low cost, abundance, and high energy), Li-containing anodes (usually Li metal) are required which is a long-term safety concern. Lithium sulfide (Li2S), the fully lithiated state of sulfur with a theoretical capacity of 1,166 mAh g-1, is a more desirable cathode material compared to sulfur as it can allow the use of lithium-free anodes such as Si, Sn, Sb, or metal oxides.2,3 However, a large overpotential (∼1 V) was identified on the initial charge of bulky Li2S particles due to the insulating and low lithium ion diffusivity nature.4 Although significant improvements have been achieved by using some electrolyte additives,5-7new and scalable methods are still needed.

Herein, we present a facile and scalable infiltration method to resolve this issue by adding a Li2S solution into a commercial, binder-free, self-standing carbon nanotube (CNT) paper as current collector followed by drying. Li2S nanocrystals are formed in the conductive CNT network, leading to a negligible overpotential in the first charge.

As represented in Fig. 1, Li2S powder was first dissolved in anhydrous ethanol to form a uniform solution.7 Then the Li2S solution was added into a piece of CNT paper, followed by drying inside an Argon-filled glove box (<0.1 ppm of H2O). Afterwards, a half cell was prepared by adding a certain amount of electrolyte (1 M LiCF3SO3 and 0.1 M LiNO3 in dimethoxy ethane (DME)/1,3-dioxolane (DOL) (1:1 v/v)) into the Li2S-CNT electrode, followed by a Celgard 2400 separator, additional electrolyte, and lithium metal anode. Finally the cells were crimped for electrochemical evaluation.

Li2S particles were deposited and confined in the nanoporous structure of the CNT paper to form Li2S nanocrystals after ethanol was removed, as shown in Fig. 1. The Li2S loading can be precisely controlled by tuning the concentration and volume of solution added to the paper. The as-prepared cell has an open circuit voltage (OCV) of ~2.16 V, which is much lower than that (2.28 V) of the cell with micro-sized Li2S particles.2 As shown in Fig. 2, the cell can be charged at a voltage below 2.5 V with negligible overpotential in the first charge which is similar to the following charge. Comparing to other Li2S cathodes reported,5-7 the Li2S-CNT electrode prepared by the infiltration method shows the lowest overpotential. The nanocrystals of Li2S formed in the CNT network contribute to the exceptional performance in the first charge. The cycling performance is shown in Fig. 3. The cell exhibits an initial discharge capacity of 727 mAh g-1with a capacity retention of 77% after 50 cycles at C/10 rate. The Coulombic efficiency is 82% in the first cycle and maintains at 98% on average in the following cycles.

In summary, Li2S nanocrystals formed in the nanoscaled CNT network by the infiltration method show an unprecedented low overpotential in the first charge and a good cycle life with high efficiency. 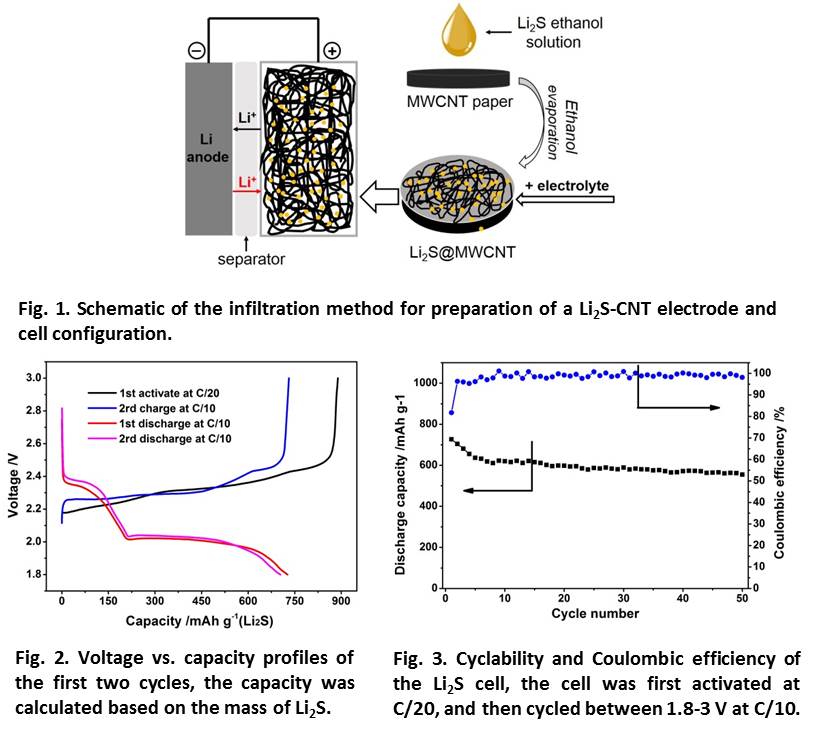