Salon A-1 (Hilton Chicago)
A. N. Jansen, S. E. Trask, and B. J. Polzin (Argonne National Laboratory)
The constant demand for more energy in smaller volumes requires the need for high energy density cathodes and anodes. While there exists a portfolio of available cathode materials with increasing incremental improvements in energy, the choices on the anode side of the cell have been limited to graphite and hard carbon. In recent years, attention has been directed to improving the graphite energy density by adding silicon. However, the volume expansion of a silicon particle can approach 400% upon full lithiation. This large expansion and contraction of the silicon particle during electrochemical cycling not only has a negative influence on the robustness of the solid electrolyte interface (SEI) layer, but also negatively impacts the dimensional tolerance of the electrode, cell, and battery.

In this work, the variation of the electrodes and cell thickness is measured for a baseline graphite and several silicon-graphite/graphene electrode systems. These values were determined before cycling, after formation, and at various states of charge by measuring the entire cell thickness change and the electrodes themselves after disassembly. For this study, xx3450 (format size) single-sided single-layered pouch cells were used with ~20 mAh capacity, and 1.2 M LiPF6 in EC:EMC (3:7 wt.%) + 10 wt.% FEC was used as the electrolyte. These cells were made and tested in Argonne’s Cell Analysis, Modeling, and Prototyping (CAMP) Facility.

Figure 1 is a summary of the percent change in thickness for the anode only relative to the initial dry electrode for the baseline graphite anode and three classes of silicon-based anodes still in development. The silicon-based anodes in general have a higher percent rise in thickness than graphite alone, but with proper particle composition and morphology the impact on electrode thickness can be controlled to an acceptable level. In these cells, the cathode (and separator) changes were relatively insignificant.

The impact of anode expansion on the total cell thickness was estimated for various anode-cathode pairings. With proper electrode design, it was found that the variation in cell thickness during charge and discharge could be held within 10% for the three classes of silicon-based anodes studied in this work, provided the silicon content was the minor constituent. While accounting for the thickness changes in anode systems is an important feature to monitor when using silicon-based materials, more work is still needed to enhance their cycle life. 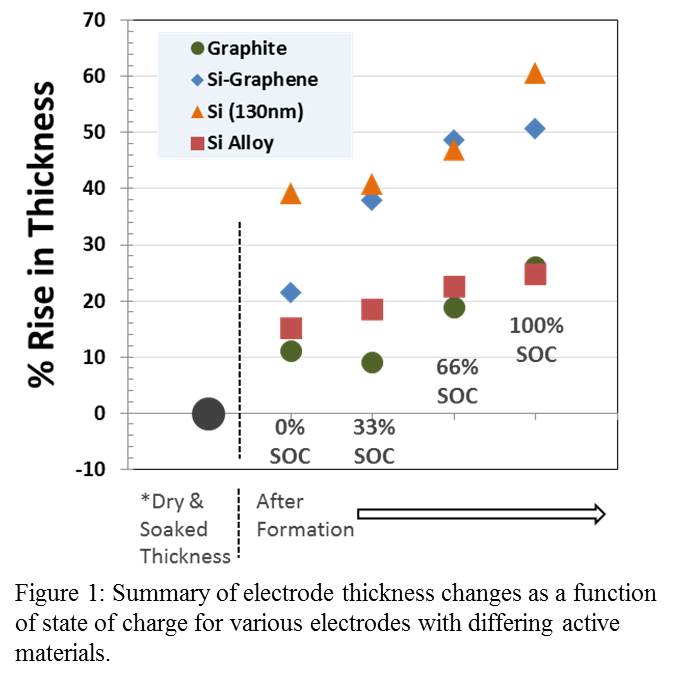