In PEC water splitting, a semiconductor is used as photoanode, which absorbs solar energy and thus, provides, photogenerated carriers (electrons and holes) for hydrogen evolution reaction (HER) and water oxidation  or oxygen evolution reaction (OER), respectively. The development of semiconductor material with low band gap (1.23 eV < Eg < 3 eV) to absorb visible light and thus, drive the HER and OER reactions with minimum over-potential, and minimum density of lattice defects is of considerable interest. This will also facilitate recombination of photo-generated carriers and thus, lower the PEC response, high electrical conductivity and high stability in aqueous electrolyte solution leading to efficient utilization of solar energy, resulting in efficient and economic hydrogen production. Thus far, well studied semiconductor materials such as TiO2, ZnO, Fe2O3 have issues such as wide band gap and poor stability for long term PEC water splitting operation. However, among all these materials, ZnO is a promising material due to its higher electron mobility than TiO2 (~155 cm2 V-1 s-1 for ZnO vs. ~10-5 cm2 V-1 s-1 for TiO2). The systematic band gap engineering of ZnO will help in lowering the band gap of ZnO (3.2 eV), which will improve light absorption in the visible region of interest and number of carriers available for the reaction.

In this study, vertically aligned ZnO nanowires (NWs) co-doped with Co and N are explored as photoanode (semiconductor) for PEC water splitting for the first time. These NWs are synthesized using well-known hydrothermal route, followed by heat treatment in NH3 at 400oC, 500oC 600oC and 700oC. These compositions are denoted as (Zn0.95Co0.05)O:N-y (y=400, 500, 600) NWs, where y is the temperature of heat treatment in NH3 atmosphere. The cross-sectional SEM image of (Zn0.95Co0.05)O:N-600 NWs is shown in Fig. 1.

The photoelectrochemical characterization of (Zn0.95Co0.05)O:N-y has been carried out in 0.5 M Na2SO4 as an electrolyte, Pt wire as counter electrode and Ag/AgCl as the reference electrode (+0.197 V vs. NHE), using a scan rate of 10 mV/sec and temperature of 260C in H-type cell, where photoanode and cathode (Pt/C) are separated by Nafion membrane (Dupont).

Thus, this study explores (Zn1-xCox)O:N NWs as potential semiconductor material for economic and efficient production of hydrogen via PEC water splitting. The results of the synthesis, microstructural and photoelectrochemical activity of these semiconductor materials will be presented and discussed. 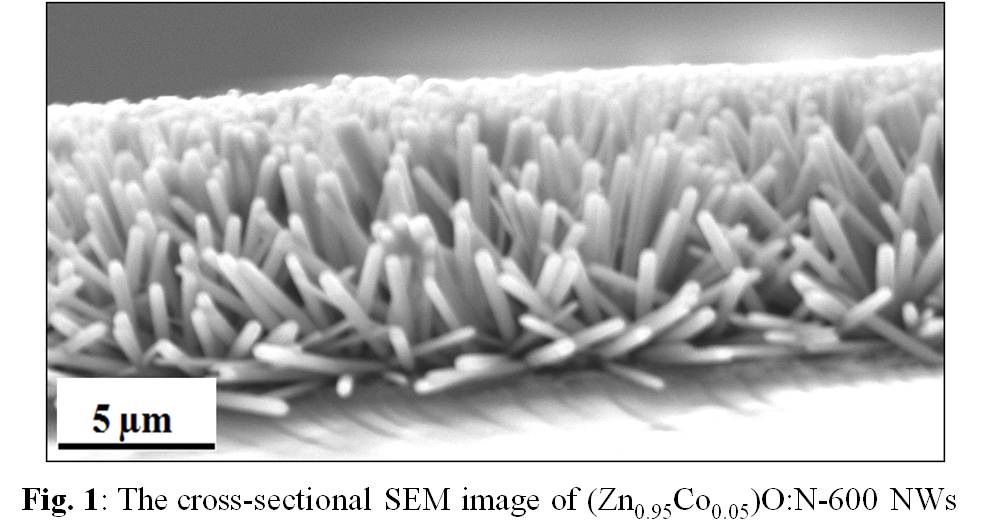