PDR 2 (Hilton Chicago)
B. Narayanan, S. Deshmukh (Argonne National Laboratory), S. Ramanathan (Harvard University), and S. K. R. S. Sankaranarayanan (Argonne National Laboratory)
Corrosion of metals in aqueous environment, such as seawater, represents a technologically relevant electrochemical phenomenon involving complex chemical interactions at the metal-oxide/aqueous media interface. These interactions result in coupled electrochemical processes, such as, metal dissolution and reduction of agents in the environment. A fundamental understanding of these processes at the atomic level is an area of immense interest with applications not only in engineering, but also in catalysis and surface chemistry. To gain atomistic insights into such processes, we employ a model system consisting of copper oxide thin film on a copper substrate; the oxide film interacts with the chloride ions in the aqueous medium. Using extensive molecular dynamics simulations based on a reactive force field (ReaxFF), we systematically investigated the impact of (a) the stoichiometry of oxide film, and (b) solvation dynamics on the dissolution kinetics of Cu and adsorption of Cl on the Cu-oxide surface. Our MD simulations indicate that corrosion initiates via adsorption of Cl- ions on the Cu-oxide surface; these Cl- ions, in turn, bind with nearby Cu atoms causing dissociation of existing Cu-O bonds, and form soluble Cu-Cl complexes. These complexes dissolve in the aqueous media resulting in dissolution of Cu atoms and thinning of the oxide film. We found that upon increasing the oxygen content in the oxide film, the Cl- ion adsorption and Cu dissolution is severely impaired. For instance, increasing oxygen stoichiometry from 0.2 to 0.79 causes Cl-adsorption to drop by half. In other words, O-rich Cu-oxide films provide better corrosion resistance than O-deficient ones. Furthermore, our hydrogen-bond correlations show that water present in the aqueous media forms ordered layers on oxide films with high oxygen content; as the O-content is reduced, this order gets disrupted.

Use of the Center for Nanoscale Materials was supported by the U. S. Department of Energy, Office of Science, Office of Basic Energy Sciences, under Contract No. DE-AC02-06CH11357.

Figure Caption: Temporal evolution of the interface between the passive oxide layer (at different oxygen stoichiometry) and aqueous medium at selected times during our MD simulations of corrosion. For the sake of clarity, the adsorbed chloride ions are shown as big spheres (green), while the copper (tan), oxygen (red), and hydrogen (blue) atoms are shown are shown are small spheres. 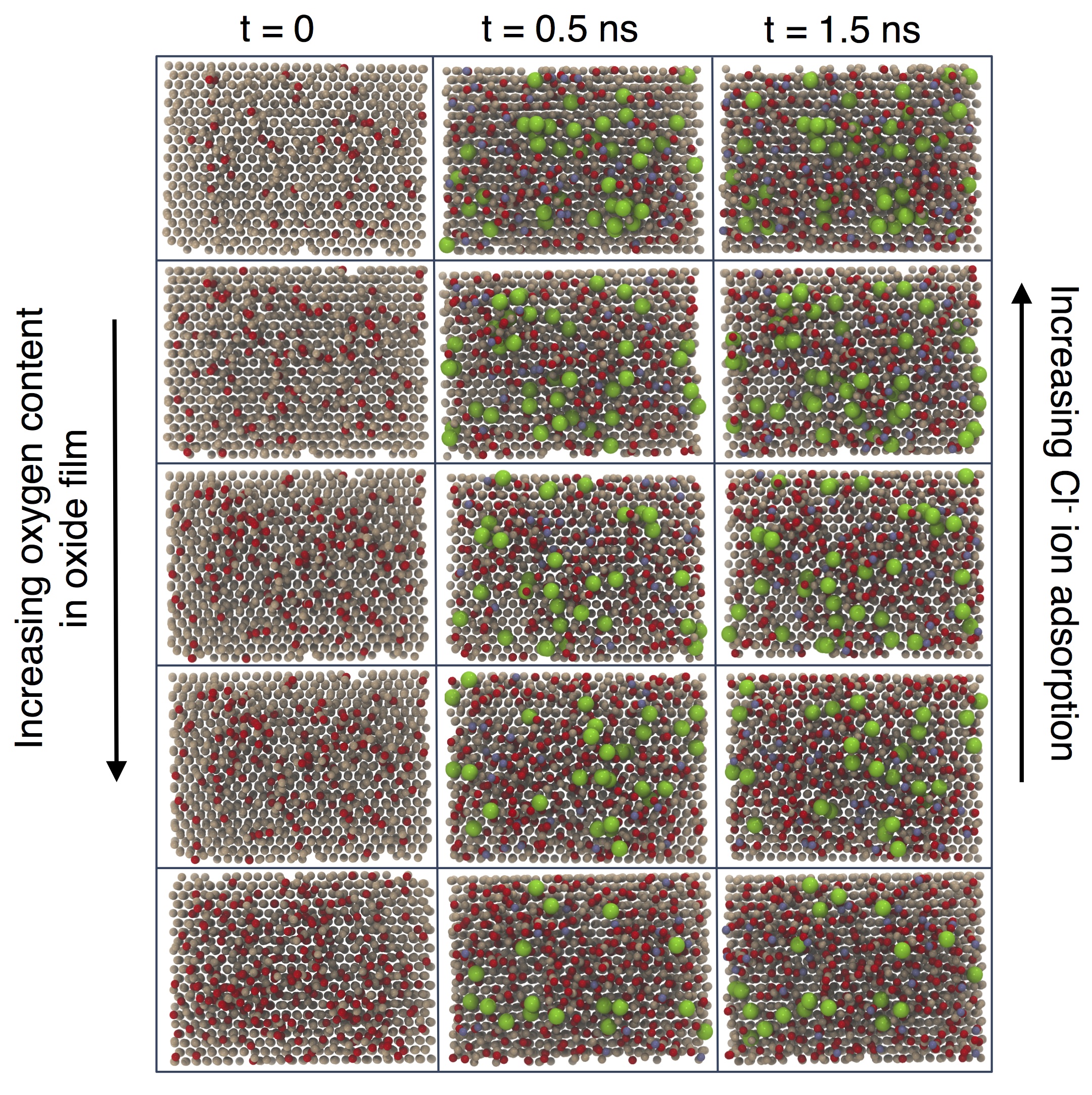