Lake Erie (Hilton Chicago)
T. Torimoto, Y. Douke, H. Shibakawa (Graduate School of Engineering, Nagoya University), S. Kuwabata (Graduate School of Engineering, Osaka University), and T. Kameyama (Graduate School of Engineering, Nagoya University)
Size-quantized semiconductor nanoparticles have attracted much attention as an efficient light absorbing material in quantum dot solar cells due to their tunable energy gap (Eg) for light energy conversion systems. Extending the optical absorption range of nanoparticles has been an important research subject to effectively utilize solar light, which contains light from the UV-visible to near-IR wavelength region. As for binary semiconductor nanoparticles (e.g. CdTe, PbS and PbSe), the control of their size has been a useful method to modify their optical properties. Recently, we have reported the syntheses of multinary semiconductor nanoparticles, such as AgInS2[1], ZnS-AgInS2[1], and Ag8SnS6[2], as an alternative to highly toxic binary particles such as CdTe and PbSe. The wide tunability of chemical composition also enabled to control the Eg of these particles. In this study, we report the fabrication and photoelectrochemical characterization of ZnSe-AgInSe2 (ZAISe) solid solution nanoparticles as a novel near-IR-responsive material for a solar energy conversion.[3]

ZAISe(x) nanoparticles ((AgIn)xZn2(1-x)Se2; 0≦x≦1) were synthesized by a thermal decomposition of metal acetate and selenourea in oleylamine for 10 min at 250 oC under nitrogen atmosphere. Thus-obtained ZAISe nanoparticles were immobilized on TiO2 porous films deposited on FTO electrodes, in which 3-mercaptopropionic acid was used as a cross-linker between the surfaces of TiO2 and ZAISe(x) nanoparticles. These electrodes were finally surface-coated with a CdS thin layer via SILAR method to remove the surface defect sites on ZAISe particles (TiO2/ZAISe(x)/CdS). A quantum dot-sensitized solar cell (QDSSC) was prepared with the TiO2/ZAISe(x)/CdS photoelectrode and a counter electrode of Cu2S-deposited FTO electrode (Cu2S/FTO). The TiO2/ZAISe(x)/CdS was attached to the Cu2S/FTO with the use of a Himilan polymer film of 50 μm in thickness as a spacer. The cell was filled with an aqueous solution containing S2-/Sxredox species. Current density-voltage curves were measured with AM1.5G irradiation using a solar simulator.

TEM observation revealed that spherical nanoparticles were formed with the size of around 4 nm, regardless of x value. As shown in Fig. 1a, the absorption onset of thus-obtained nanoparticles was blue-shifted from 900 nm to 400 nm with an increase in the content of ZnSe, indicating that the Eg of ZAISe(x) nanoparticles could be successfully controlled only by changing the value of x. Electronic energy levels of ZAISe(x) nanoparticles were measured by photoelectron spectroscopy in air. Figure 1b summarizes the electronic energy levels of ZAISe nanoparticles as a function of the value of x. Both levels of the conduction band edge (ECB) and the valence band edge (EVB) varied depending on the chemical composition of ZAISe particles: the EVB levels were slightly shifted from -5.38 to -5.04 eV with a decrease in the x value from 1.0 to 0.25, while the ECB levels were remarkably shifted from -3.94 to -2.97 eV, accompanied by an increase in Eg from 1.44 to 2.07 eV. The ECB levels of ZAISe(x) NCs were higher than that of bulk TiO2(-4.0 eV), regardless of their chemical composition.

A QDSSC fabricated with TiO2/ZAISe(x)/CdS photoelectrodes exhibited different light-electricity conversion properties depending on the x value. With a decrease in the x value of ZAISe(x) from 1.0 to 0.5, both the short circuit current (JSC) the open circuit voltage (VOC) increased, resulting in a remarkable increment of power conversion efficiency (PCE). Further decrease of x from 0.5 to 0.25 slightly lessened the values of JSC, VOC, and PCE. The fill factor was almost constant at ca. 0.4 ~ 0.5, regardless of the composition of ZAISe(x) immobilized. Among the kinds of nanoparticles investigated, ZAISe(0.5) particles exhibited the optimal photovoltaic performance, JSC of 8.8 mA cm-2and PCE of 1.9%. 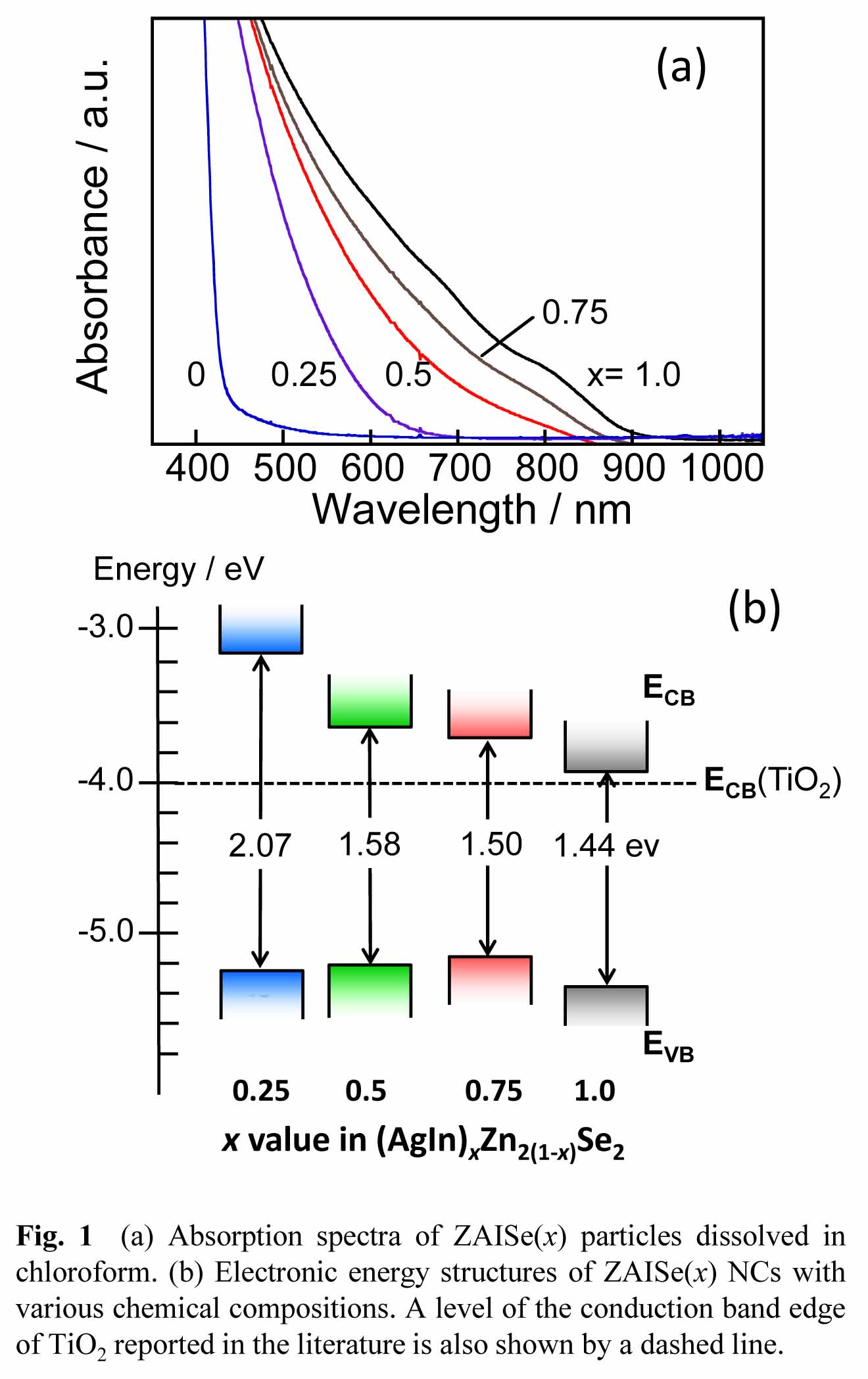