Salon A-2 (Hilton Chicago)
A. Eddahech and A. Delaille (CEA)
Introduction

Simple and reliable tools for state-of-health (SOH) determination of Li-ion batteries is a growing challenge helping the integration of energy storage solutions in new zero-emission transport [1]. A common technique for observing gradual changes in lithium-ion cells is differential (incremental) capacity, dQ/dV analysis as a function of cell potential, U, and aging cycles/days [2]. Such a calculation could be helpful to investigate the conditions of the anode and cathode inside Li-ion batteries so that indications on aging mechanism may be obtained. For example, Han et al. [3], considered the battery IC curve for on-board analysis of the battery aging mechanism in BMS. Researchers on lithium-ion battery reliability believe that such measurements can improve understanding of cell degradation mechanisms [4], discussing various changes in the characteristic curves and results.

The aging tests were performed on high-energy lithium cells of LMO technology, where the negative electrode insertion material being used was the coke-type carbon substance, graphite. However, the positive electrode are made of LiMn2O4. The cells are aged under power cycling mode where they are charged and discharged at 1C/1C rate at three test temperatures (25°C, 45°C and 55°C) in climatic chambers. Cell performances are checked periodically according to the experimental design.

The differential capacity versus potential (dQ/dV vs.U) is calculated for the aforementioned lithium-ion cells and reported at several stages of ageing (see Fig. 2).

We note a flattening peaks in the dQ/dV vs. U plots over aging which may be caused by the loss of conductivity because of surface film formation and impedance rise inside the electrode [5-6]. According to Abraham et al. [7], this could be due to oxide particle isolation that result from a loss of electronic connectivity, i.e. loss of oxide-carbon contact or ionic connectivity, i.e. particle surface films or surface structure changes. The peak heights in the differential capacity curve are observed to decrease with aging, indicating that the number of available sites for lithium occupancy at these voltages (or SOCs) is decreasing with aging.

Therefore, using discharge profiles at test temperature and at several SOH, the amplitude of the first peak of the IC curves corresponding to around SOC85% is reported and normalized following its value for a new cell (SOH=100%). Results are compared to the referential method of SOH evaluation, namely the discharged capacity measurements (see Fig. 1).

Fig.1. Comparison of classic SOH (Discharged capacity) and the developed SOH which is based on IC peak amplitude monitoring.

Fig.2. IC curves through aging for the Cell aged at 45°C.

A simple method for SOH determination of high-energy Li-ion cell is proposed based on IC peak monitoring.

The amplitude of IC peak near 3.99V (SOC 85%) is very significant in order to study battery aging. Such a SOH method could simplify BMS solution as it presents a potential gain in resources and time-processing and gave a results similar to those obtained from classic SOH method. 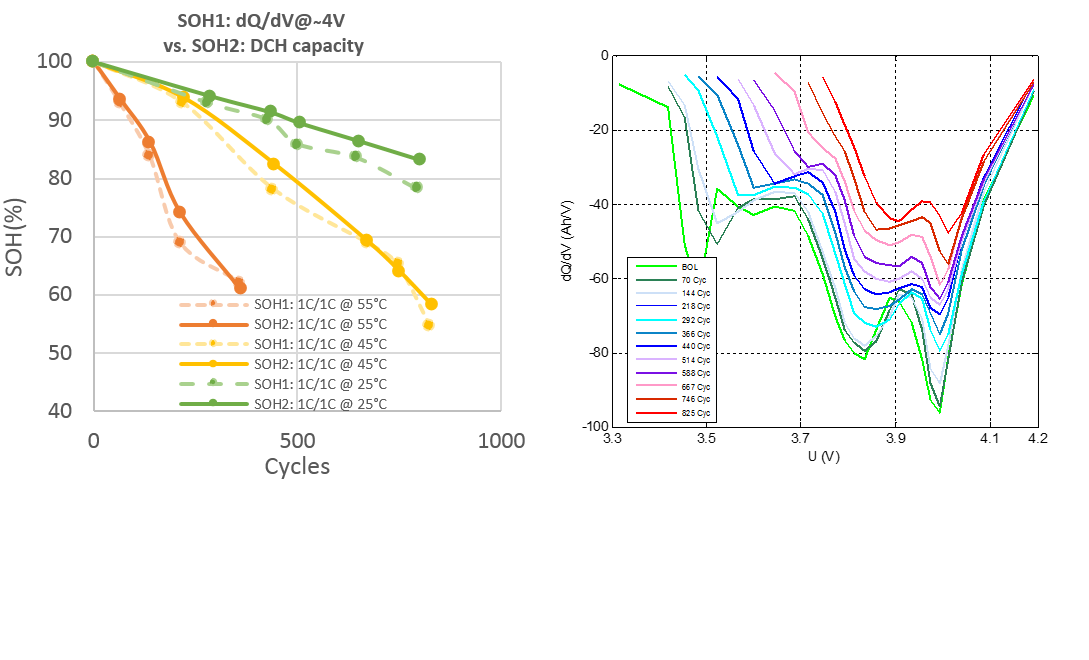