Williford Room A (Hilton Chicago)
A. E. Aynalem and D. Walsh (University of Nottingham)
Protic ionic liquids (PILs) are a sub-class of ionic liquids that have attracted attention recently as effective proton carriers for medium-temperature fuel cells because PILs have favorable properties such as high proton conductivity, low vapour pressure and excellent chemical and thermal stability.1,2  PIL-based fuel cells (PILFCs) can conduct protons without deliberate humidification, unlike the polymer electrolytes used in conventional proton exchange membrane fuel cells (PEMFCs), meaning that water management in PILFCs is simpler than in PEMFCs.  Moreover, the rate of the oxygen reduction reaction (ORR) in PILFCs can exceed that of the rate of ORR in PEMFCs as PILFCs are able to operate above 100 °C.  Despite recent research in the development of PIL-based fuel cells, electrocatalysis in this media has not yet been studied in any great detail.  In particular, detailed study on the effect of electrode-adsorbate interactions during electrocatalysis of the ORR at Pt in PILs has been lacking.

This contribution investigates the role of ion adsorption on the electrocatalysis of ORR, CO oxidation and hydrazine oxidation in a series of ammonium-based PILs.  Surface oxides that form during trace water oxidation play a key role during electrocatalysis in PILs.  Pt surface oxides hinder the ORR, and this reaction only occurs at potentials where the Pt surface is in its reduced state.  By contrast, the rate of hydrazine oxidation in PILs increases as the extent of residual Pt oxide increases.  Moreover, CO oxidation coincides with oxidation of the Pt surface in each PIL, suggesting that the reaction proceeds via a Langmuir-Hinshewood mechanism involving adsorbed CO and surface oxides.

The “CO displacement” technique was used to determine whether the cations or anions of the PILs were adsorbed on the Pt surface, and this insight was used to explain the trends observed during electrocatalysis of the ORR in PILs.   For example, the onset potential of the ORR in diethylmethylammonium trifluoromethanesulfonate ([dema][TfO], see Figure 1A for structure) was 0.7 V vs RHE at 45 °C, and in diethylmethylammonium bis (trifluoromethanesulfonyl)imide ([dema][Tf2N]) was -0.2 V vs RHE at 45 °C.  It is important to note that the cations of these PILs are the same, and their physicochemical properties such as viscosity and conductivity are similar.  Figure 1 shows the i-t curve when CO was dosed at various potentials into [dema][TfO] and [dema][Tf2N].  In [dema][TfO], cation displacement was observed negative of 0.25 V vs RHE and anion ([TfO]-) displacement was seen positive of 0.28 V vs RHE (Figure 1A).  In contrast, anion displacement was observed at all potentials studied in [dema][Tf2N] (Figure 1B), indicating the strong interaction between Pt surfaces and the [Tf2N]- anion.  This result indicates that the binding of the [Tf2N]- anions to the Pt surface causes the high overpotential of the ORR in [dema][Tf2N]. Extension of the “surface electrocatalysis” approach described here to well-defined surfaces will reveal whether ion adsorption from PILs exhibits structural sensitivity and will yield new insights into electrocatalysis in PILs.  Ultimately, this approach may lead to the rational design of electrocatalysts for use in PIL electrolytes 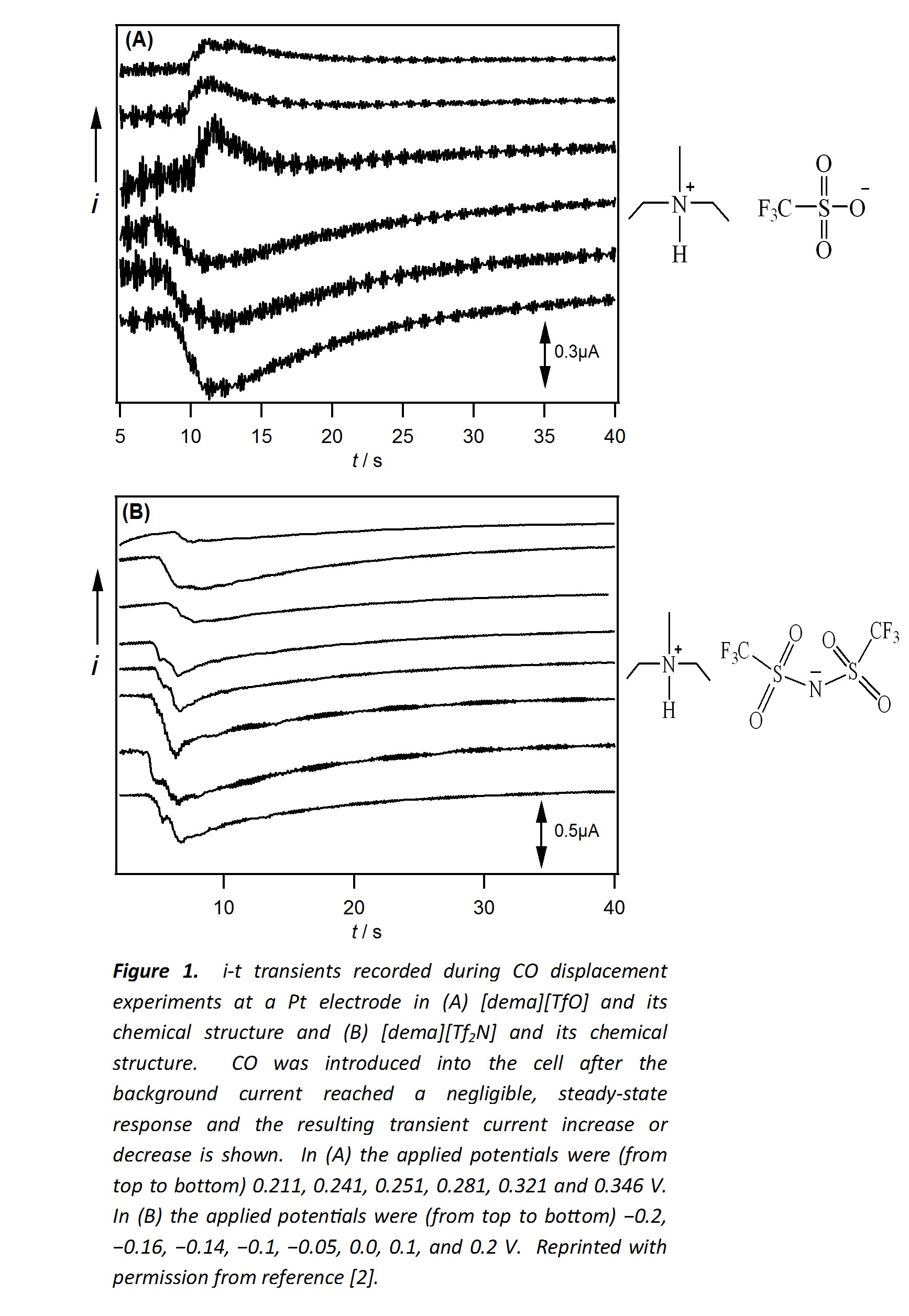