Salon C (Hilton Chicago)
V. Bevara (Aero propulsion, Mechatronics and Energy, Florida State University), M. Mehta (Aeropropulsion, Mechatronics and Energy Center), and P. Andrei (Florida State University)
Growing greenhouse gas emission and degrading air quality, mainly in the cities due to automobiles and power generation driven by fossil fuels has resulted in a shift in interest towards renewable energy sources and storage technologies. Among the available energy storage devices based on electrochemical systems, metal-air batteries have received much attention because of their high theoretical energy densities. Nevertheless, the power density of these batteries is relatively small. For instance, in the case of Li-air batteries, the power density is limited by the following factors: (1) low oxygen solubility and diffusivity in the electrolyte, resulting in low oxygen concentration at the reaction sites, (2) resistive losses in the electrolyte and the separator, (3) resistivity of the deposit product in the cathode, and (4) clogging of the pores with deposit product, thereby, making it difficult for oxygen to flow to the reaction sites. Li-air batteries with mixed/dual electrolyte possess the unique advantage of having soluble reaction products at low electrolyte concentrations during discharge. This makes it possible to eliminate the last two limitation factors by using them as flow batteries.

In this presentation we develop a new analytical model and derive a closed-form expression for the discharge voltage and power density of Li-air batteries with mixed electrolyte. We take into account oxygen diffusion, Butler-Volmer kinetics at the cathode/anode, the resistance of the separator, aqueous electrolyte, solid-electrolyte insulating layer at anode, and the finite conductivity of the electron conductive medium. The cathode and anode reaction rates are coupled with the oxygen diffusion equation and used to develop expressions for the cathode and anode overpotentials. The combined resistance of the cell is considered as a function of temperature. The expressions for the overpotentials and the resistance are then used to develop an equation for the cell voltage. In this way, we are able to derive a closed-form equation for the power density of Li-air batteries with mixed electrolyte (the power density being defined as the product of the cell voltage and the current density). By maximizing this expression we compute the maximum (theoretical) power density of these batteries and analyze the factors that limit this power density. We show that the maximum power density depends not only on the internal resistances but also on the oxygen pressure, solubility, and diffusivity in the electrolyte. Results are shown for Li-air batteries with aqueous/basic electrolyte in the cathode (i.e. LiOH) but the model can be extended to other metal-air batteries by appropriately adjusting the material constants and geometrical proportions. A very good agreement is obtained between our analytical approach and previously published experimental results.

The derivation of our model, a comparison between the analytical and experimental results, and different mechanisms influencing the power density will be discussed at the conference. Analytical results of the discharge voltage and maximum power density for different physical parameters like temperature, oxygen partial pressure and different battery specific parameters like discharge current density, cathode reaction rate constant, specific surface area, and oxygen diffusion coefficient will be presented at the conference. Possible approaches to improving the power density of these batteries are discussed along with anticipated future impediments. The figure shows the dependence of the maximum power density on temperature for different oxygen diffusivities ranging from 10-7 cm2/sec to 10-4 cm2/sec. 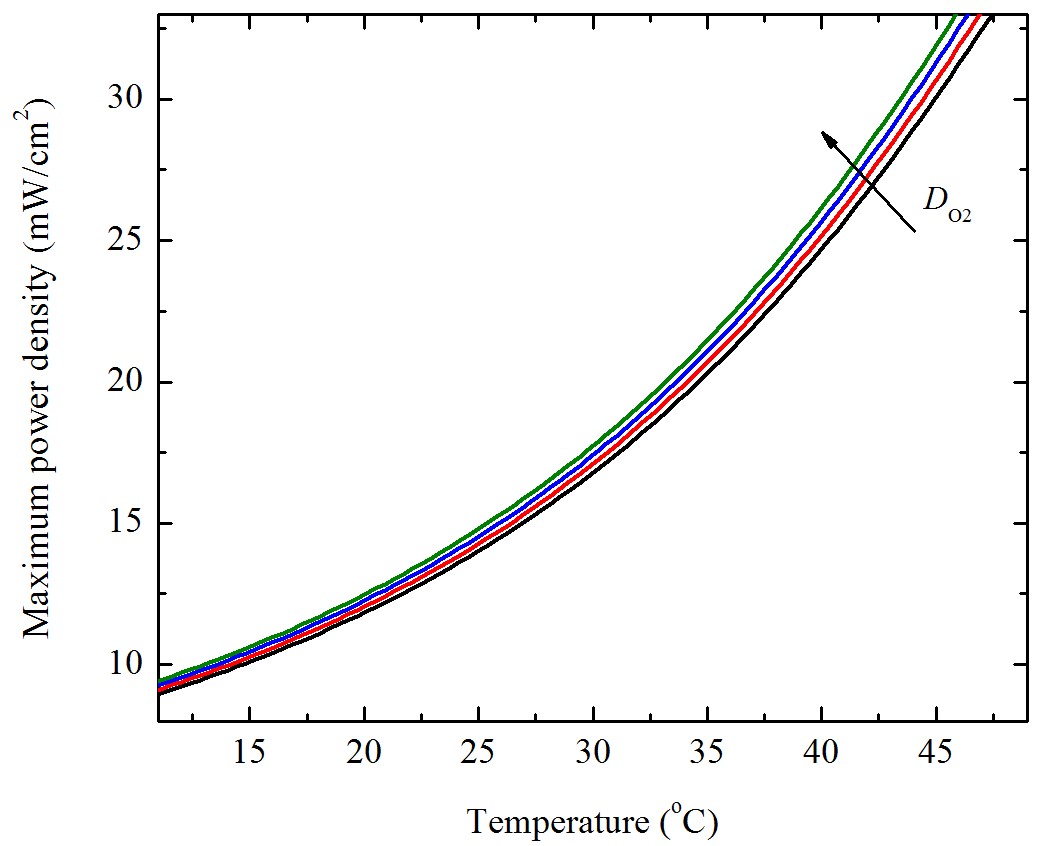