Using complementary information from operando X-ray diffraction (XRD) and 119Sn Mössbauer spectroscopy, it was determined that during the first discharge, TiSnSb undergoes a conversion process leading to the simultaneous formation of Li-Sb and Li-Sn intermetallics. The corresponding electrochemical equation was thus proposed for complete reaction of Li:

In this equation, however, the role of titanium was only hinted, since no specific information on this metal was available. Moreover, the mechanism by which the charge process occurs in TiSnSb is not yet fully understood due to the amorphous feature of the charged electrode. Different hypotheses have been proposed, including the presence of a mixture of binary phases, or the formation of a ternary alloy close to TiSnSb. At his time, however, the precise mechanism remains elusive.

In order to shed more light on the role of titanium in this mechanism, and to better understand the interplay of the two p-group metal during the complex electrochemical discharge/charge mechanism, a complete operando X-ray absorption spectroscopy study of the system at the absorption K-edges of the three metals was performed.

Operando EXAFS data at the Ti K-edge (Fig. 1), obtained on self-supported  electrodes of TiSnSb formulated with CMC, provided clear evidence of the formation of Ti metal nanoparticles at the end of the discharge, confirming the supposed conversion mechanism.

Operando EXAFS data obtained with fully formulated electrodes at the Sb and Sn edges (Fig. 2) show the formation of the lithiated phases, in line with the expected mechanism. However, the different reaction paths observed by comparing the Sn and the Sb spectra suggest that the two metals do not react simultaneously, and that Sn-rich intermediates are formed through the discharge and again during the following charge.

These results are very important to corroborate the effective conversion mechanism in such system, and shed more light on the interplay of the two p-group metals in such complex system. 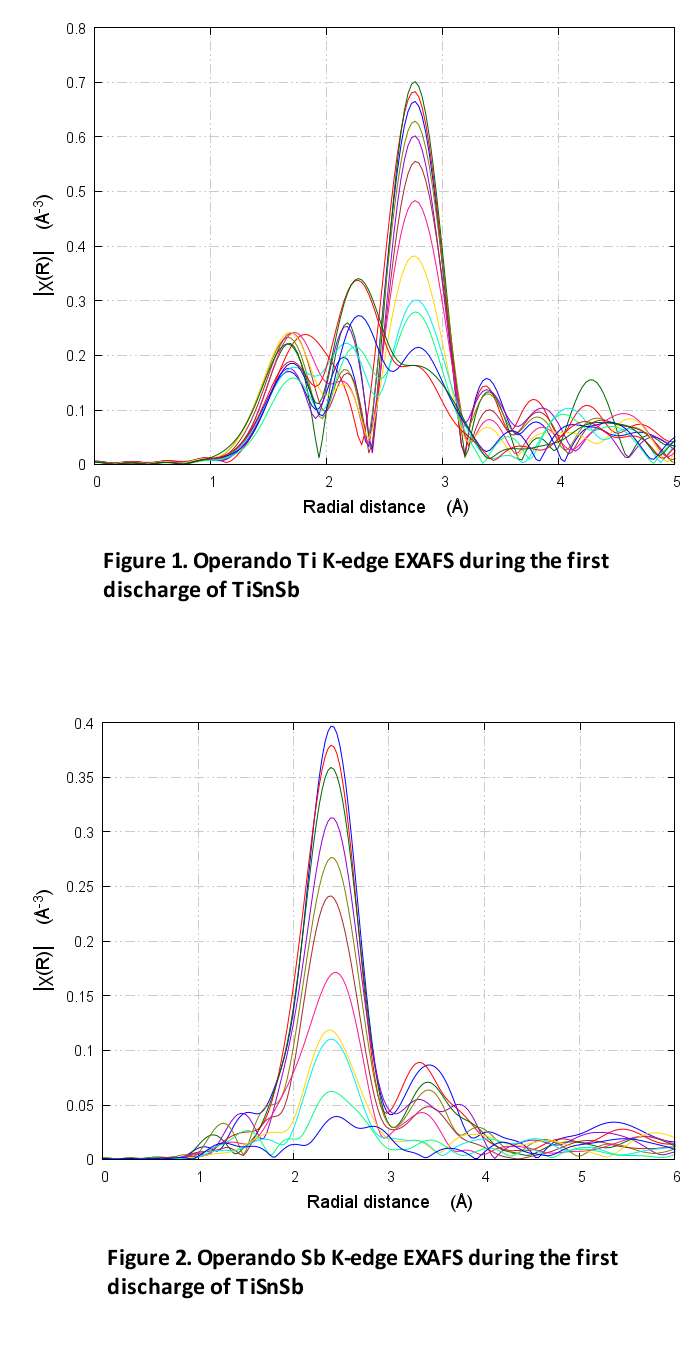